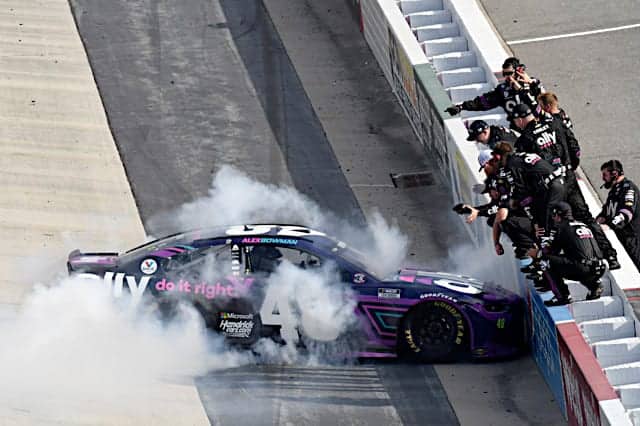 Alex Bowman leapfrogged a dominant Kyle Larson on a cycle of pit stops and set sail, cruising to his fourth career victory and second of 2021 in Sunday (May 16) afternoon’s Drydene 400 at Dover International Speedway. The win capped off a day where Hendrick Motorsports thrashed the field, finishing 1-2-3-4. It is the first time that’s been done since Roush Racing did it at Homestead in 2005 — and just the fourth time in NASCAR history.

The Monster Mile’s lone date in 2021 was largely dominated by Larson, but stops under caution swapped the HMS teammates and gave Bowman the lead. Hendrick overwhelmed the field as a whole, with Chase Elliott and William Byron rounding out the top four.

“You know, we won Richmond and had a really rough couple of weeks there,” Bowman told Fox Sports 1. “Went to some really good racetracks for us and struggled; told the guys last week ‘we’re still the same team that did it at Richmond,’ this is another really good place for us. Just so pumped … feels right to put the [No.] 48 back in victory lane here after how many races that this car has won here.

“Just so proud of this pit crew,” he added. “It was obviously a rough offseason for us, a big void to fill … the whole pit crew’s doing a really good job. … It was fun racing Kyle [Larson] and glad to get Hendrick Motorsports another win.”

Martin Truex Jr. jumped out to the lead before being passed by Byron, while Miles the Monster struck Kyle Busch with his seemingly yearly dose of bad luck. The engine-afflicted No. 18 held on to the lead lap until the competition caution flew on lap 35, pitting to analyze the issue. Busch finished 27th, seven lap off the lead.

Another yellow waved when Chase Briscoe got into the wall while trying to stay on the lead lap, ending stage one. Larson scored the stage win and retained the lead off pit road, dominating the second stage.

Meanwhile, Josh Berry‘s Cup Series debut for Spire Motorsports didn’t go as planned as he had his right-front tire go down and bounced off the wall. Hendrick had all four drivers in the top 10 around lap 100 and improved on the trend, recording a 1-2-3-4 stage finish with their Chevrolets: Larson for the stage sweep, followed by Elliott, Bowman and Byron. It was the sixth stage victory of 2021 for Larson, the most of any driver in the Cup Series.

That also continued well into the final stage, with Hendrick occupying the top four spots all the way through lap 300 and beyond … at least, until Aric Almirola slammed the outside wall to bring out a caution. The No. 10 caught fire but Almirola was able to get out, albeit visibly shaken. Almirola took a moment to catch his breath, doubled over with his hands on his knees.

A huge hit for Aric Almirola in Dover. pic.twitter.com/u19Cs2XzcL

A lead change finally reared its head when Bowman beat Larson off of pit road, setting sail despite the speed all afternoon from the No. 5. Bowman led the rest of the race, including his 1,000th lap led in his Cup career.

According to the folks at Racing Insights who provide us info at FOX, the Bowman pit stop where he took the lead was the fastest pit stop of the 2021 season.

Bowman did the traditional Dover burnout by nosing his car into the inside wall and spinning the rear tires. The win was the first for the No. 48 at the track since Jimmie Johnson won there in 2017, the last of his 12 victories at the track and final win as a Cup driver. As a team, HMS led all but 18 of the 400 laps on Sunday.

“We’re on a lot of fire over here,” Bowman added with a laugh as FOX Sports’ Jamie Little pointed out a rubber fire near the car’s quarter panel. “[…] How about this? The fans are back, I get to talk to you with my face. So appreciative to have you guys back here, best racetrack on the schedule in my opinion. Wish we still came here twice.

Joey Logano finished fifth, while Kevin Harvick, Denny Hamlin, Tyler Reddick, Daniel Suarez and Cole Custer rounded out the top 10. Bubba Wallace finished 11th and Ross Chastain 15th. Suarez seemed disappointed with the top-10, remarking that he “wants a trophy” in his interview, but it was the second such finish for newcomer Trackhouse Racing.

Next week, the Cup Series will make some right turns in addition to left-handers as they travel to Texas’ Circuit of the Americas. Next Sunday (May 23) marks the series’ debut at the track, with coverage set for 2:30 p.m. ET on Fox Sports 1.

Congrats to Alex bowman on his 2nd win this season. All the hendrick-Gordon cars are kicking ass. I see Wallace finally got a top 15 due too 9cars coming in with 70 to go or he most likely would have gotten a 18th-20th place where he ran all day. He move to 8th and lost 3positions to put him in a 11th place finish. So staying out paid off for him. I’m sure macdonalds and dr.pepper and all his other sponsors want a lot better finishes for there money they pay to the 23 team. Lots of luck on that.

The Sponsors are so much not worried about finishes, they want air time. And Fox (and NBC) will make sure they get plenty of that. Cole Custer got a top 10 but did you see him or Bubba more on TV yesterday?

Yep – same thing with Jimmie and Carvana in Indy… It’s like they should have just been title sponsor this year they get so much air time.

Larson didn’t lose it. He’s showing maturity. Congratulations to the #48 team and Alex.