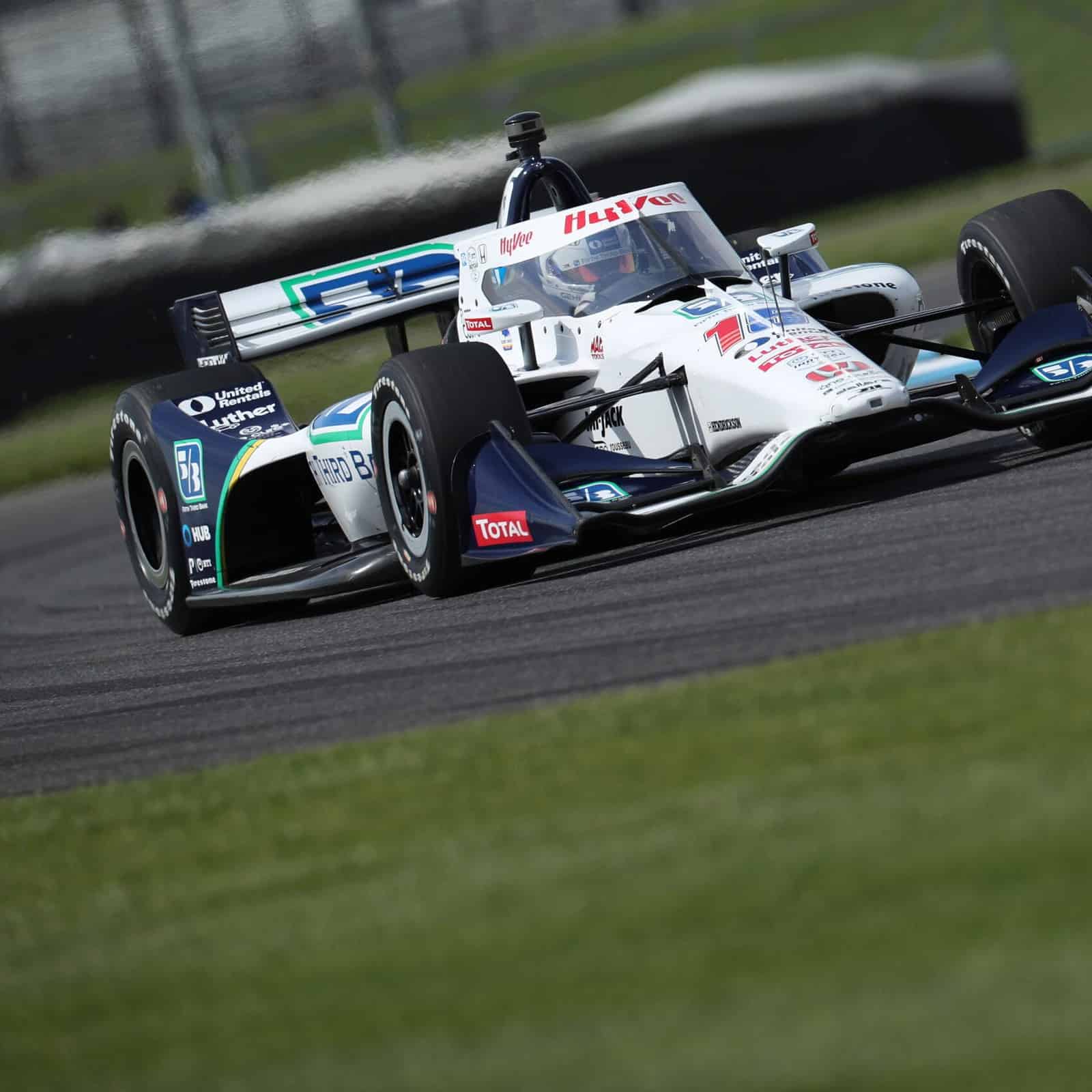 After a collision on the first lap of the race significantly damaged his right side pod, Graham Rahal had a mountain to climb in Saturday’s GMR Grand Prix at the Indianapolis Motor Speedway road course.

After making two pit stops under the first (and only) full course yellow of the race, the No. 15 Rahal Letterman Lanigan Racing Honda was leaving pit road trying to catch up to the rest of the field as the green flag was getting ready to come out.

Rahal was in 24th place and about a third of a lap behind the rest of the field as the green flag came out on lap 4. He questioned the call on the two-way radio, wondering why the team pitted him for a second time.

“That restart wasn’t ideal, we topped up on fuel and restarted 20 seconds behind,” Rahal said post race to IndyCar Radio. “Imagine if we had restarted in the back of the pack and didn’t have to make up the 20 seconds.

The strategy was simple, even if it didn’t appear so at first. Instead of doing a three stop strategy like the rest of the field, Rahal’s team converted the rest of the race to work with a two-stop strategy, figuring that the time lost by running slightly slower laps to a fuel number would be less than the time lost running down pit road and remaining stationary for an extra pit stop. This happened thanks in part to a thorough reading of the rules.

Rahal started the race on the Firestone black sidewall primary tires. Per the IndyCar rulebook, drivers must complete two laps on both the black primary option and the red sidewall alternate option tire, which is softer, providing more grip. The rulebook also states that a driver’s second lap on one type of tire can be completed in the pit lane, even if the car’s pit box is before the start/finish line. Rahal’s team switched out for red sidewall tires at the end of the second lap of caution, allowing Rahal to run on the alternate compound for the rest of the race.

It was a stroke of genius, and the strategy call worked.

Rahal’s pit stops on Lap 30 and 58 allowed the Ohio native the opportunity to anonymously creep his way up the standings as the race progressed. While most of the field pitted between laps 12-16, Rahal stayed out, getting as high as fifth before pitting.

“By the time I caught [Juan Pablo] Montoya, he had to pit,” Rahal said. “By the time I got to some of those guys in the sequence, they were having to pit, so I could just keep going so the momentum just kept rolling, but it was definitely a good day.”

After pitting, the 31-year-old was back in 21st position, so three fewer cars were in front. After the next cycle of pit stops just before halfway, Rahal again found himself in fifth, but when Rahal pitted for the final time, that started the avalanche of other drivers making their final stops of the race shortly after his.

Rahal would get back to fifth place on lap 66 as Scott Dixon pitted for his final stop and would remain there for the rest of the 85 lap race. By finishing fifth, Rahal remains fifth in points, but only 39 points behind Dixon.

“It was a solid day I think for our organization, to finish fifth, particularly after the contact at the start and everything else, to just save it and save the day was a big deal for us,” Rahal said on pit road after the race. “I’m pretty excited to come home fifth and gather those points and close in on Dixon a little bit.”