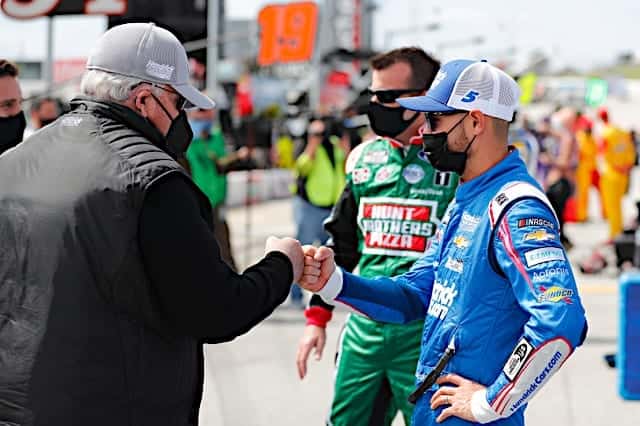 Rick Hendrick will not forget Sunday’s (May 16) race at Dover International Speedway anytime soon.  His quartet of Cup Series drivers conquered Miles the Monster, earning the first 1-2-3-4 finish for the team in its 37-year history.  The sight of the No. 48 Chevrolet rolling into victory lane was certainly a familiar one, but this time, it was Alex Bowman who took it there.  Behind him, Kyle Larson, Chase Elliott and William Byron capped off a dominant day for Hendrick Motorsports.

Although HMS won the championship last year with Elliott, it has been considerably longer since the whole organization, top to bottom, was running well.  The last time all four Hendrick drivers qualified for the Cup playoffs was 2014, the first year of the 16-driver format.  At that time, none of the current HMS drivers had even made their first starts with the team yet!

It certainly feels like all of them are playoff bound in 2021, with only Elliott still lacking a victory this season.  But only one can win the title each year.  So, with half of the regular season complete in the Cup Series, who among the Hendrick Motorsports foursome is most likely to be battling for the championship in November?

For starters, you could make a strong case for the defending NASCAR champion himself.  Even though Elliott has not posted a victory in 2021, he has generally performed well, with five top fives and seven top 10s.  More importantly, Elliott has more experience with the elimination style playoffs than his teammates do.  He has made the postseason in all five of his full-time seasons and advanced to at least the Round of 8 in the last four.  No other current Hendrick driver has had that kind of consistent success.  Although Elliott may not have wins now, history suggests the No. 9 team will bring speed when the time is right.

The question is, will Elliott and his crew be prepared? So far, he has banked only one playoff point, which came via a stage win way back at the Daytona International Speedway road course.  While his teammates and other contenders keep piling up victories and stage wins, Elliott and the No. 9 team can’t seem to put themselves in optimal position to close out races.

If Elliott has a similar run through the postseason like he did last year, will it matter how many playoff points he had during the regular season?  Probably not.  But even drivers who typically navigate the playoffs well can find themselves in situations where championship hopes are dashed for want of a handful of points.  Just ask Kevin Harvick about that.

Speaking of playoff points, Bowman has 10 of them now – five each from his two victories.  Up until now, Bowman was only an occasional winner in Hendrick equipment, and he had never enjoyed a multi-win season.  That changes this year, with Bowman heading back to the playoffs in 2021, looking to follow up the solid Round of 8 run that he enjoyed last year.  As one of only two drivers with multiple wins so far, the No. 48 team has a lot to look forward to.

However, when Bowman is not winning races, he’s had more than his share of problems this season.  Wrecks, untimely flat tires and mechanical gremlins have often prevented Bowman from earning finishes to match where he typically runs.  Note that while he has two wins in the last seven races, Bowman’s next best finish in that set of events is 17th.  His deep playoff run in 2020 was successful because he largely avoided bad finishes.  Not all of the No. 48’s misfortune has been self-inflicted, but the team will need to mitigate some of those bad results if they are going to be true title contenders.

If consistency has been Bowman’s struggle this year, it has been Byron’s strength.  After a pair of bad results in Daytona, Byron scored his second career win at Homestead-Miami Speedway and has been marching up the points standings ever since.  His fourth-place finish at Dover on Sunday marks 11 consecutive top-10 finishes, which lifted him to second in the standings by a single point.

A reunification with crew chief Rudy Fugle seems to have done wonders for Byron, but it is important to note that Hendrick has been patient with his development as well.  Since Byron has been given time to grow and gain experience as a racer, we may only be seeing the beginning of what he can accomplish.

That said, it remains a mystery how a new and improved Byron will fare in the playoffs.  Last year, Byron squeaked into the postseason with a victory, his first in the Cup Series, after an up-and-down regular season.  Few considered him a legitimate contender, and a crash at Bristol Motor Speedway brought a quick end to his championship hopes.

While Byron is obviously performing at a much higher level in 2021, we do not know if he will be able to sustain his current momentum or perform at his best with the big trophy on the line.  Experience matters quite a bit when competing in the Cup Series playoffs.  Byron has done great work over the last few years to get near the top of the mountain, but will he able to beat veteran climbers to the peak?

Then, there is the newest driver at HMS, Larson.  Most who are familiar with Larson know about his ability to run fast and on the edge of control.  It was long speculated that if he got hooked up with a team like Hendrick, he would be one of the toughest drivers to beat in the sport.  It certainly did not take long for Larson to win, and the No. 5 team has been fast almost every week.  Having already posted six top fives and eight top 10s with 774 laps led, Larson is making good on the faith Hendrick and Jeff Gordon showed in him.

Yet one serious problem continues to plague Larson – an inability to close.  It is an issue that has dogged him throughout his career in stock cars and followed him straight to HMS.

At Atlanta Motor Speedway in March, Larson lost the race when Ryan Blaney passed him with less than 10 laps to go.  A week ago at Darlington Raceway, Larson appeared to be catching Martin Truex Jr. in the closing laps, but he never found a way to get past the No. 19.  And on Sunday at Dover, Larson led 263 of 400 laps yet could not keep up with Bowman over the final stretch.  If the championship battle comes down to needing a win in the last race of the year, can Larson be counted on to take the checkered flag?

Ultimately, all four Hendrick drivers have their strengths and weaknesses when it comes to a potential championship fight.  Given the tendency of the playoffs to favor drivers with experience, though it’s likely Larson and Elliott will rise to the top late in the year.  Between the two of them, Larson looks a bit stronger right now.  Despite his issues with letting race wins slip away, the No. 5 team has the most raw speed among the Hendrick camp, which gives Larson the highest ceiling.

If Larson and his team can just figure out how to turn some of those top fives into wins, he will have the best chance to give Hendrick another Cup Series championship in 2021.

Pure speculation. One race among four racers for the championship. Nothing else matters. Luck, and whoever is best that day is champion. One penalty, dropped lug nut, one mishap, and it doesn’t matter how good your season was, someone else is champion. Sucks huh.

Yet every champion we have had during the Playoff system has been a deserving multi-time winner in his championship season, which is more than we can say about the old Latford “we-only-race-for points” system.

The title winner still doesn’t have to win the last event. He just has to finish ahead of the other three. In case you haven’t noticed, NA$CAR will only allow one of the four to win.

Agree, luck is more important than ever. Being THE best is not enough anymore. All you need to be is one of the best and luck determines who gets the golden ring.