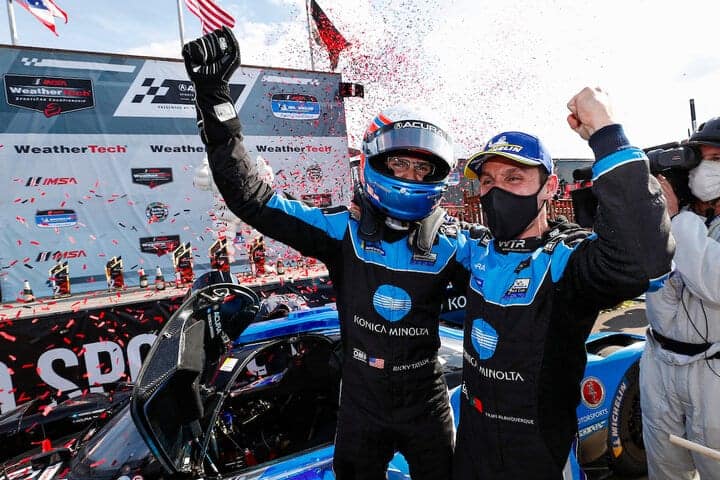 Wayne Taylor Racing’s Filipe Albuquerque and Ricky Taylor held off a late charge from Action Express Racing Sunday (May 16) to win the Acura Sports Car Challenge at Mid-Ohio Presented by the Acura TLX Type S.  It is the team’s second win of the 2021 season.

“First of all, I’m extremely happy for Acura and to start off our sprint season working together with a win,” Taylor said after the race.  “[The team was] giving me a fuel number and I was trying to hit it. There were times I wasn’t telling them, no.  I’m not doing it this lap.  But [Felipe] Nasr was putting me under so much pressure at some points that I had to push.  Then I would burn myself for the next few laps and have to pay it back and pay the price later in the stint.”

Mazda Motorsports’ Harry Tincknell led the field to green and was able to pull a couple of seconds on the pack.  Once he reached the GT Daytona traffic 10 minutes into the race, his lead began to greatly expand.

When Tincknell handed over the car to Oliver Jarvis, he had a 14-second lead.  However, the team did lose time in the pits.  Jarvis was still fast enough to keep the advantage over the rest of the pack, but it was only a four-second lead as opposed to 14.

The race’s sole caution brought everyone to the pit lane with 55 minutes remaining.  It would be tight for everyone to make it to the end from there without a splash-n-go.  Here, the Action Express Racing crew was able to get Nasr out of the pits first while Jarvis dropped back to third.

Once the race restarted, Taylor immediately started pressuring Nasr for the lead.  A lap into the run, Taylor got to the inside of Nasr exiting turn 5 and took the lead away.

By no means was the race over here.  Nasr came back on Taylor and the two drivers spent a number of laps fighting hard until Nasr dropped back.  This allowed both drivers to conserve fuel and mount a final charge.

In the final couple of laps, Nasr was able to get all the way back up to Taylor’s rear end with the help of lapped traffic.  However, he wasn’t quite close enough to make the move as Taylor was held on for the win.

Taylor and Albuquerque’s margin of victory was a mere three-eighths of a second over Nasr and Pipo Derani.  Tincknell and Jarvis were third, followed by JDC-Miller MotorSports’ Loic Duval and Tristan Vautier.  Chip Ganassi Racing’s Kevin Magnussen and Renger van der Zande had to pit for a splash of fuel and finished fifth.

LMP3 saw Riley Motorsports’ Gar Robinson lead from pole, but he was not able to pull away from his competition.  Andretti Autosport’s Jarett Andretti and Performance Tech Motorsports’ Dan Goldburg gave chase.

That Goldburg and teammate Rasmus Lindh were able to race at all was a stroke of luck given his team’s scramble prior to the race.  The regular No. 38 suffered an engine failure in qualifying Saturday. After getting special dispensation from IMSA, the team was allowed to switch to their backup car due to a lack of an available backup engine.  That backup car raced in the 105-minute Prototype Challenge that finished at 11:15 a.m., a little more than three hours before race time.  The team had to switch that car from No. 6 to No. 38 and replace the braking system prior to the 160-minute primary show (braking issues forced the team to retire from the Prototype Challenge race).  The car also had to pass IMSA inspection in time for a recon lap prior to the race.

Switching to a backup car forces you to drop to the rear of the class.  In the race itself, Goldburg quickly moved up to third, then stalked Andretti while keeping pace with Robinson.  In slower traffic, Goldburg was able to overtake Andretti for second.  Three laps later, he took the class lead away from Robinson.

Goldburg was not able to pull out much of a lead over Robinson, but held onto to the advantage until it was time to stop and have Lindh take his place in the No. 38.  Robinson pitted at the same time and made way for Felipe Fraga.  Fraga was able to beat Lindh out of the pits to regain the lead.

Lindh took the lead when Fraga made his final stop right before the sole caution of the race.  However, Fraga regained it once Lindh stopped.  From there, Fraga was able to hold on to take the win for Riley Motorsports.

In GT Daytona, much of the race ended up being a duel between Vasser Sullivan’s No. 14 Lexus and Turner Motorsport’s BMW.  Aaron Telitz led from the pole and was all but unchallenged for the first stint of the race.  Jack Hawksworth got in the car and continued to lead until the left rear suspension broke on the car 70 minutes in while Hawksworth enjoyed a five-second lead.

Hawksworth was able to nurse the Lexus RCF GT3 back to the pits with a wobbly rear wheel.  The Vasser Sullivan team gave the car a look, but determined that they couldn’t fix it on pit road.  Hawksworth ended going behind the wall, never to return for the rest of the race.

Hawksworth’s failure left Foley with a 22-second lead over the second Vasser Sullivan Lexus with Zach Veach at the wheel.  The pit cycle did cost the team some of their advantage, but Bill Auberlen still had a comfortable lead over Veach once he got in the car.

Behind them, the real battle was for fourth in class.  Alegra Motorsports’ Michael de Quesada had it, but Wright Motorsports’ Patrick Long and PFAFF Motorsports’ Laurens Vanthoor wanted it.  Compass Racing’s Mario Farnbacher was in the mix as well, but had to make a pit stop.  As Farnbacher was making his move to go to the pit lane, de Quesada and Long had contact entering the Carousel.

It is somewhat unclear whether the Long-de Quesada contact, or the contact Long had with Vanthoor cut his right rear tire, but the result was that Long’s spin into the sand trap brought out the race’s one and only caution.  Once he was extricated from the trap, Long struggled to drive back around the track so that he could pit.  Additional problems after the pit stop forced him to pull off, extending the caution.  He would eventually get back under way and finish 12th in class, four laps down.

Once the race restarted, Auberlen was able to open up a comfortable lead and hold on to take the victory.  For Auberlen, the triumph extends his record for top-flite IMSA victories with his 63rd career class win.

Auberlen and Foley ended up 2.712 seconds ahead of Veach and Frankie Montecalvo.  Paul Miller Racing’s Bryan Sellers and Madison Snow were third in their Lamborghini, while The Heart of Racing’s Roman DeAngelis and Ross Gunn were fourth in their Aston Martin.  Farnbacher and Jeff Kingsley were fifth.

Next up for the DPi and GT Daytona classes is Belle Isle Park in Detroit for the Chevrolet Detroit Grand Prix on June 12.  They’ll also be joined by the GT Le Mans class in a non-points capacity.  That race will air live on NBCSN at 5 p.m. ET.  For the LMP2 and LMP3 classes, they are not scheduled to race again until the Sahlen’s Six Hours at the Glen on June 27.