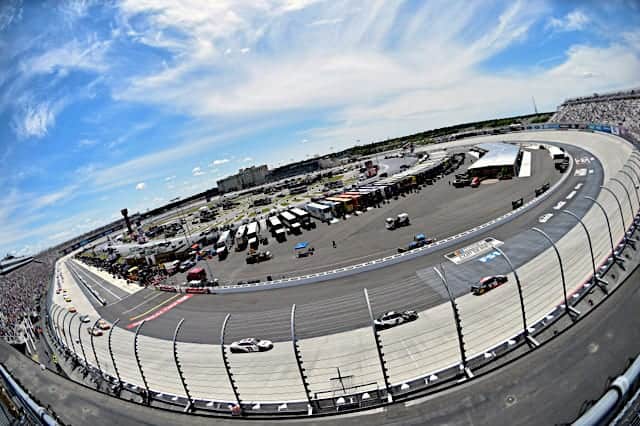 This year, Dover only gets one crack at NASCAR. When the circus visits the high-banked concrete oval with the oldest racing surface in Cup (the concrete, originally nicknamed “White Lightning,” has been in use since 1995), you never really know what’s going to happen. With the lower downforce package in play, it means that the groove can widen out as well.

Since the track switched to concrete, cautions have been down significantly (though there are exceptions to the rule, most notably the 2004 spring race, which is the slowest Cup race ever run at Dover).

In addition to high-banked racing, Dover is home to director Artie Kempner’s annual Drive for Autism charity golf tournament. Someone came up with the idea of having Jamie Little throw to … herself to introduce the piece, then throw back to herself back at the track. This was weird to watch.

Since the NHRA was at zMax Dragway this past weekend (it’s next to the Dirt Track at Charlotte and across US Route 29 from Charlotte Motor Speedway), FOX Sports 1 had a cross-promotional opportunity. Viewers saw Bubba Wallace work out with Antron Brown before he got a chance to warm up a funny car. It is a very raw car, as Wallace discovered. Finally, we got to see Wallace take on Daniel Hemric, JR Todd and Shawn Langdon in a four-wide race in Toyota Supras. Wallace apparently won it, but it was a bit unclear from the clip.

Since coverage of eliminations in the NTK-NGK Four-Wide Nationals immediately followed the race coverage, this feature aired in a modified fashion on the drag racing broadcast. Kyle Busch also made an appearance at zMax Dragway during the weekend.

Dover races tend to have a lot of green flag racing. The track is very tricky to race at, in real life and in sim racing. If you wreck there, it’s probably going to be pretty big, as Aric Almirola will attest to.

It’s also really hard to pass. You had to be significantly better than the person in front of you in order to make a move stick. It says a lot about how strong Chase Elliott’s car was that he could come from the rear of the field and get up to fourth by the end of stage one.

Yes, Hendrick Motorsports was the story of the race. No one could really touch them. They led all but 18 laps on Sunday. The only exceptions to the rule? Martin Truex Jr. leading the first 15 laps of the race before William Byron snatched the advantage, and three laps led on pit road during rounds of stops. Sadly, the only actual pass for the lead on the track Sunday occurred during a commercial break.

This event just was not all that competitive at the front of the field. The Hendrick boys had the field covered. They ran 1-2-3-4 for nearly the entire second half of the race. Kyle Larson appeared to be unbeatable, so much that when FOX Sports 1 ran their Ones to Watch segment, they made it all about Larson as they believed that he could not be usurped.

Clearly, that move backfired. Just a terrible decision knowing that they had taken the time on NASCAR RaceDay to run a piece about how Larson had so often been unable to close the deal in the past. It was only after the No. 48 crew had allowed Alex Bowman to jump Larson in the pits on lap 304 that they seemed to realize this.

Later on, they did show a truly interesting graphic. Entering Sunday’s race, Larson had 31 career top-two finishes in the Cup Series, just over 13% of his career starts. Pretty amazing stat when you think about it. Only seven of those (22.6%) were victories. Also, a number of those losses came after dominating a good chunk of the race. Some of the more blatant losses, such as the 2018 Bojangles’ Southern 500 at Darlington where he led 284 of 367 laps, don’t even qualify here because he didn’t finish in the top two.

Sunday was the second time this season that Larson has dominated a race and failed to come through in the clutch. I would argue that Atlanta would be a far more frustrating race than Sunday in Dover was, but it’s a clear pattern for Larson.

In the past, Larson would seemingly panic towards the end of these long races. He’d mess up his line while rim-riding and put himself in the wall, hurting his car in the process. Sunday wasn’t even the first time this has happened at Dover to him. Four years ago, Larson led 241 laps and finished second to Jimmie Johnson after Johnson got him on a Green-White-Checkers start.

Racing-wise, Sunday’s race was not really the most competitive. Actual on-track passes were down significantly from last year. There was some decent racing to be had, but it was really confined to the laps right after restarts. Once you got beyond that, it was slim pickings for action.

Sadly, this was a rather boring race to watch. Yes, the drivers had to work more than they would have with the 550 horsepower package, but it didn’t lead to better action. Dover is just one of those places that throws up duds from time to time. It happens.

Post-race coverage was about average. Viewers got a decent number of post-race interviews, including with Bowman and Rick Hendrick. Viewers also heard from drivers such as Daniel Suarez, who earned a top 10 finish, prior to FOX Sports 1 leaving for Charlotte.

When you get a race that really isn’t all that swell like this, the networks have to find other ways to make the race interesting. FOX Sports 1 tried to put a heavy focus on Hendrick Motorsports given the running order. Then, they botched their Larson coverage and ended up with pie on their faces when Larson got beat. This just wasn’t the most exciting event to watch, and FOX Sports 1 didn’t make it any better.

That’s all for this week. Next weekend, NASCAR enters uncharted territory as they go to Circuit of the Americas near Austin for the first time. All three of NASCAR’s National Series will be at the 3.427-mile road course. In addition, Formula 1 will be in Monaco for the annual jaunt through the oh so narrow city streets. Yes, it’s been separated from Memorial Day. TV listings can be found in the Television drop down.

Given the uncertainty about the weekend since few of the drivers entered have previously raced there, and the fact that rain could be in the forecast, I’m going to give this weekend a little more attention. I put in to take Friday off from my day job months ago so that I can watch the actual practice sessions. For Couch Potato Tuesday, I’ll have a critique of the Cup and Truck races from COTA. The Critic’s Annex this week will cover Saturday’s Drydene 200, where over-coverage of Kim Burton came into play once again.

You tell us Fox didn’t make the broadcast better, then you tell us all about bubba’s workout drivel ! You tell us how hard it is to pass here, then tell us Larson didn’t come through in the clutch. What you didn’t tell us was that Larson’s team lost the lead to Bowman in the pits and clean air prevailed once again. Perhaps the extra day at the track this weekend will improve both you and Fox’s coverage.

WOW, that was a hard to read article.

I get your point. But the bigger problem for me is the high school locker room antics of Bowyer dragging Gordon into every slap-(butt) stupid comment he makes. I want to watch a freaking sportscast, not be entertained by ‘Beavis and Butthead’. Cover the race, boys. Also the director needs to take a Ritalin. The short, choppy cuts from one race to another show zero sense of timing for the viewer to focus on the cut. They cuts are 5 to 10 seconds too quick. I liked the two person announce team. Adding a third for comedy didn’t work (for me) from the days of Dandy Don on Monday Night Football to today. On the plus side, Mike Joy has never looked better. Maybe this BS works for everyone else, but certainly it does not for me.

I could not agree more. The Gordon/Bowyer comedy hour is annoying. Bowyer is more crude than he is funny, and the two of them talking over each other and pretending hilarity with the “good ole boy” schtick is becoming more and more annoying.

Please, for heaven’s sake, stop the nonsense about “Bowyer’s money” and him “needing a loan.” That may have been mildly amusing once, but it has aged very badly.

And the camera jumping rapidly from one in-car to another is moronic.

John, thanks for writing a comment that capsules my thoughts so well. I agree totally with all your points.

Tom B
Reply to  John

Enough buffoonery is right. If the network thought Dr. Bergen was too old looking then Mike Joy needs to go also. Mikey Waltrip doesn’t look so bad now when compared to this booth of stooges.

Doesn’t work for me either. Tooooo much comedy and not much race coverage. It’s been that way for a long time. Get rid of the comedian Boyer and Gordon would be better. If I wanted comedy I would turn on comedy channel. Now I mute the comedians and listen to MRN or PRN.

I guess they cover Kim because she is interesting, emotionally. And Dover was a snoozefest this year but they had a good crowd and sometimes the racing was good. I wished we’d see asphalt back on the track–I think the concrete is overrated now.

I cannot describe how pleasant it was to see all those people without face masks. To see smiles and facial expressions. To see happy faces.

From what I’ve read this appears to have been the real throwback weekend of the year. A Hendrick aero snooze-o-rama, booth buffoonery and crappy coverage. Change some names and artwork and it’s the late 2000’s all over again.