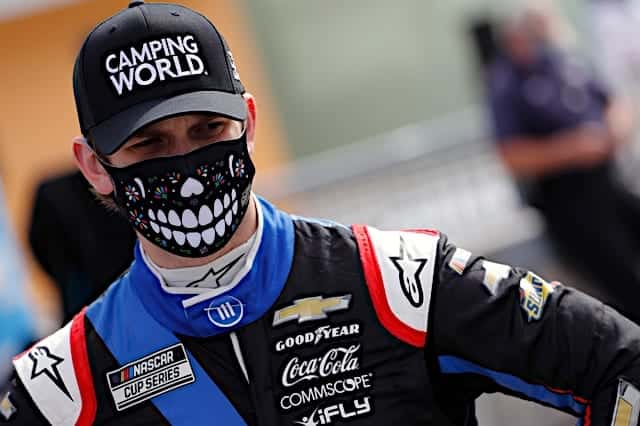 The refreshing sight of packed grandstands made for a very compelling race Sunday (May 16) in the Drydene 400 at Dover International Speedway. The action-packed, one-mile oval provided great entertainment for those fans while underdogs of the sport cashed in on some opportunities. Daniel Suarez once again led the way, stepping up to the plate for the darkhorse side with a strong top-10 effort.

Stage one was clean for Suarez and his No. 99 CommScope team. Suarez was able to stay on the lead lap despite a long green-flag run, finishing it out in 17th. He bettered his position in stage two, entering the top 15 and staying there. His Chevrolet stayed competitive over the long run, running top-10 lap times and avoiding tire falloff. The Monterrey, Mexico native concluded the stage 14th.

Just over halfway through the final stage, a yellow for Aric Almirola allowed some teams to make a strategy call. Crew chief Travis Mack made the decision to keep his driver on track, placing Suarez in the top 10 with older tires.

Another caution shortly thereafter hindered the strategy of those who had pitted. As the run went along, Suarez’s Goodyears were able to tighten him up, allowing the No. 99 to stabilize safely within the top 10. The variegated Commscope colors dazzled under the Deleware sun as Suarez earned some much welcome television time for his efforts.

In the end, Trackhouse Racing ultimately crossed the line in ninth position for Suarez’s second top 10 of the season. His 28 points earned were also his highest since he accumulated 49 at the Bristol Dirt Race.

“The No. 99 CommScope Chevy Camaro was strong,” Suarez told FOX Sports. “I felt like the entire race, we were probably a top-15 car. But, with good adjustments, we gained some track position and that gave us the opportunity to finish in the top 10.

“There is still a lot of work to do, definitely. Right there at the end, I was tight. I was against the No. 11 (Denny Hamlin), the No. 41 (Cole Custer) and all these guys, but we were able to hold them off and get a decent finish. But we have to keep working and win a trophy.”

After 13 races, Suarez sits 22nd in points with four top-15 finishes. Not bad for an organization that didn’t exist at this time a year ago.

Ryan Preece carries more weight on his back than most drivers each week. With no charter and a current lack of sponsorship, Preece may not be able to run the full 2021 season. The funding issues have not stopped him from giving it 110%, though, producing a top-20 finish at the Monster Mile to keep himself on the fringes of playoff contention.

Starting from the 25th position, Preece struggled to find grip early on at Dover. A lap 35 competition caution saved him from falling a lap down early. He ultimately rounded out the first stage in 25th.

Despite falling two laps down, the No. 37 team made adjustments to the car throughout the race, allowing him to enter the top 20 in stage two. Preece battled for and earned the free pass twice in the stage, concluding it in the 20th position.

A sequence of yellows in the final stage allowed Preece to get back on the lead lap in 19th position. That was about where the No. 37 Thomas Breakfast Chevrolet hovered throughout the final moments of the race. Despite falling a lap down late, Preece brought his car across the line in 18th, even besting last week’s winner Martin Truex Jr. It is Preece’s first top-20 result since a 14th at Talladega Superspeedway and his sixth top-20 performance of the year.

The NASCAR Xfinity Series also sought to tame Miles the Monster Saturday afternoon. After a tough race at Darlington, Brandon Brown rebounded to earn a strong 10th-place performance, his fifth top 10 of 2021. He is only two top-10 finishes away from eclipsing his career high in that category.

Jeremy Clements continued his strong season as he got as high as fifth in the race before fading to 12th. He currently holds a 46-point grip on the cutline, sitting in 10th in the point standings. A little further back, JJ Yeley got arguably his best ride in a decade driving for Our Motorsports in the No. 23 Chevrolet. He made good use of it, too, finishing a respectable 14th.

Put on some cowboy boots and grab your saddle. One of the most anticipated additions to the schedule arrives as all three series head to Austin, Texas for the twists and turns of Circuit of the Americas. It will be the second road course event of seven scheduled this season.

The uncertainty that looms will allow many underdogs to take advantage. Look for solid road racers such as Front Row Motorsports’ Michael McDowell and Suarez to sneak inside the top 10 during the event.  In the Xfinity Series, drivers such as Alex Labbe, Clements and others could pull a few surprises. The new racetrack also opens the door for arguably the most unpredictable division, the NASCAR Camping World Truck Series, to have some young guns muscle their way to the front.

Start to finish, it was a great day for this entire @CommScope team bringing it home P9 ?

Solid day P12 @MonsterMile. We battled hard for it. Proud of @Mark_C_Setzer and crew for throwing all they could at it. @FPFRacing Chevy was really tight all race. Thank you to all who supported us and got their names on the hood too! #NASCAR pic.twitter.com/9oKcbnmIFt

i was very happy to see suarez finish in top 10.

Yeah, Suárez really is a “Wheel Man” and it shows. #23 with all its money and resources barely runs ahead of his old ride the #43. Goes to show it takes a lot of money to make up for lack of talent.

Stay tuned Jer, even a blind squirrel finds an acorn once in a while. When the 23 guy finally gets a top ten the woke media will let you know how truly talented he is and offer it as proof that nascar is not racist. Who knew?

#23 jumped from 18th to 8th on the strategy call to stay out on the same caution. It paid off this time so bubba jumped on twitter for the first time in 2 weeks to pat himself on the back. Waiting on articles saying how great he did.

He’s working on his Hall of Fame speech, listing his accomplishments. It would have been the shortest speech ever.

Hamlin and Jordan knew that 23XI was going to be “building” this year-why would they complain. Darrell Wallace Jr. had a respectable finish. On another note, early in this piece the name Delewere is used; it’s Delaware.

So which is most important to the teams, sponsor money or race results?

I submit that it is the money, so everything is going well.