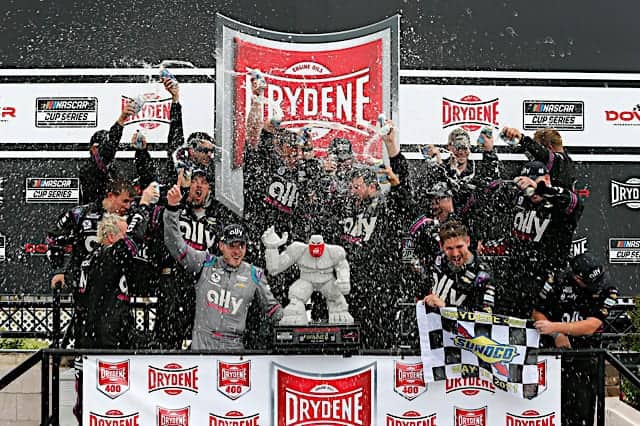 What happened at Dover?

Alex Bowman won the Drydene 400 at Dover on Sunday (May 16) after taking the lead on pit road and leading the final 97 laps.

Pole sitter Martin Truex Jr. took the lead at the start of the race for 15 laps until Byron got around him. Before the lap 35 competition caution, Kyle Busch reported an engine problem and dropped back as he limped around the track.

Byron led until that first yellow flag and was passed on pit road by Larson, who asserted his dominance on the following run. Hendrick Motorsports moved to the front early, as Elliott (who started at the rear due to tech failures) moved into the top five with Larson and Byron.

On the final lap of the first stage, Chase Briscoe lost control and slammed into the wall while he was trying to stay on the lead lap.

The @StewartHaasRcng driver gets into the @MonsterMile wall. As a result, @KyleLarsonRacin wins Stage 1 under caution. pic.twitter.com/bZ7yLU6UKJ

The stage ended under yellow with Larson getting the victory by a wide margin.

Kyle Larson ended up winning Stage 1 by 11.3 seconds after Harvick went from second to fifth on the last two laps and Chase Briscoe hit the wall.

Stage two was more of the same, with Larson outrunning the field. Elliott moved into second place and looked like one of the few cars who could stay close to Larson, but he couldn’t get past him. On lap 171, Josh Berry hit the outside wall and brought out a caution.

Larson held the lead through pit stops and a restart as his teammates moved into second, third and fourth on lap 204. That’s how they ended the second stage, too. The two stage victories on Sunday gave Larson a series-best six stage wins in 2021.

Kyle Larson dominates Stage 2 and leads every lap except for one (during a pit stop).

Bowman’s crew moved him up into second place on pit stops as he inched closer to Larson. Hendrick held the top four spots for the duration of that run until Aric Almirola had a suspension issue and took a hard hit into the outside wall.

The caution flag flies as the No. 10 of @Aric_Almirola gets into the wall in the middle of Turns 3 and 4. pic.twitter.com/DIfg0y1pCT

On the final pit stops of the day for the leaders, Bowman passed Larson thanks to the fastest pit stop of the season. The next restart came with 91 laps to go, where Bowman held off Larson for five laps until another caution flag flew, this time for Anthony Alfredo.

Well, that's one way to do it … pic.twitter.com/UfYUIv0rUr

Some cars outside the top five pitted under this yellow as eight cars stayed on track. The next run only lasted six laps, though as debris brought out another caution on lap 326. None of the leaders pitted again and the Hendrick cars retained front-running speed for the final 70-lap run to the finish.

Larson stayed within a second of Bowman for a good portion of that run but the No. 48 pulled away for a relatively unchallenged victory. The win marked Bowman’s fourth in his career, second of the season and 12th for the No. 48 team at Dover (11 by Jimmie Johnson).

Bowman’s second win of the season was a credit to his lightning-fast pit crew. This team has been among the fastest in the sport all season, and it was on full display at Dover. Bowman clearly had a car capable of winning — he led 98 laps and amassed 11 stage points. But if it wasn’t for the 12.1-second pit stop, I don’t think he gets past Larson for the victory.

Bowman: "Thank you pit crew. You guys won that race, not me."#NASCAR

Bowman did his part on the track as he held off Larson without much challenge over the final 97 laps. The No. 48 is looking better than it has in many years.

That's the fastest pit stop of the season in the NASCAR Cup Series. pic.twitter.com/HvwrBV5qhS

Larson’s second-place finish this week is much more disappointing than his second-place finish at Darlington last week. Last week was the Truex show; the fact Larson even got up there to challenge him was impressive. This week, it was another dominant race that got away for a driver who consistently seems to lose them.

Dover was the fourth race this season where Larson led the most laps and he only has one win to show for it. Larson now has 25 second-place finishes in his career compared to seven wins.

Elliott is getting hot at the right time. He was the only HMS driver not to lead a lap at Dover, so there’s clearly still work to be done for the defending champion. Third place was Elliott’s best finish since Martinsville last month and it marked his third straight top-10 result.

Going forward, Elliott and the No. 9 team have to love where the schedule is headed. Two of the next three races are road courses (Circuit of the Americas, Sonoma Raceway) and the other race in that trio is Charlotte Motor Speedway, where Elliott finished first and second last year on the oval.

The biggest head-scratcher at Dover was Truex. He entered his hometown track hotter than anyone, coming off a series-leading third win and starting on the pole. Dover has been one of his best tracks with four top-two finishes in his last four races there. All three of his wins this season also came at 750 horsepower tracks. Yet from the jump, he just didn’t have it, as Truex limped home one lap down in 19th.

I expected more out of Christopher Bell at Dover. He dominated in the NASCAR Xfinity Series there, posting two wins in four starts. Instead, he was completely out of the picture. The No. 20 was well off the pace for most of the afternoon before finishing 21st, three laps down. It was an especially strange performance because Bell was three for three on top 10s at Phoenix Raceway, Martinsville Speedway and Richmond Raceway.

I’m running out of sad words to describe the season Almirola is having. Something goes wrong for this group every week and they just can’t get out of it. Almirola was running in the top 15 for most of the race at Dover before his crash. Then, to pile on, he was shaken up after taking the hard hit. He’s finished 29th or worse in seven of 13 races this season and desperately needs a win to make the playoffs.

That was the greatest race in the history of one of the sport’s most historic organizations. What HMS did at Dover was truly special. Only four times in NASCAR history has a team placed cars in each of the top four spots (Roush-Fenway Racing in 2005, Peter DePaolo Racing in 1956 and 1957). And it wasn’t just the finish that made the day so impressive, it was the raw speed from start to finish. They ran first through fourth for the majority of the final stage with no other team really all that close.

Larson made a good point after the race about how equal all four cars were.

Kyle Larson: "Any of the four of us could have been out in the lead and that person probably would have won." Says he's not disappointed to finish second today because there's nothing else he could have done.

Bowman deserves a multi-year contract extension from Hendrick. Since he arrived at HMS as Dale Earnhardt Jr.’s replacement in 2018, Bowman has been living on one-year deals. It made sense at first — he was unproven in top equipment and didn’t win races right away. Now, he’s captured a race in three straight seasons, has his first multi-win year and remains backed by one of the series’ only full-season partners in Ally. Now, it’s time to reward him with some long-term security.

"We've already started. It should be done anytime now."@Jordan_Bianchi asks Rick Hendrick if Alex Bowman is close to signing an extension with Hendrick Motorsports.

Rick says it will be a multiyear agreement.

Austin Dillon debuted another new paint scheme at Dover. The Huk Fishing Chevy had a simple design with a slick shade of blue on top and white on the sides. I really liked the look of the blue No. 3 just for a change of pace from its usual schemes.

Last year, Dover hosted a Saturday-Sunday doubleheader for the Cup Series in August due to COVID-19 postponements. We’ll compare the 2021 race to the first Dover race in 2020 for this discussion. In that event, there was a wreck involving Kurt Busch on lap 8. After that, the only cautions were competition and stage breaks. There was a solid battle for the win as Hamlin passed Truex with nine laps left to seal the victory.

This year, we saw a somewhat similar show over the first two stages. There were limited on-track incidents and the race was dominated by Larson. Things got interesting on a few restarts in the final 100 laps, but the finish was ultimately anticlimactic. Both 2020 and 2021 were pretty average races, nothing great, nothing terrible. I’ll give 2021 the edge just because of the history we saw from HMS — I always love witnessing history.

Bowman joins Truex as the only driver with multiple wins this season. While he hasn’t been the most consistent (five top 10s, four finishes of 27th or worse), Bowman has performed when he avoids bad luck.

Here’s a look at the full standings following Dover.

The Cup Series heads to Austin, Texas for its inaugural race at Circuit of the Americas. This race will be only the second of a record seven road course races in 2021. The 68-lap Echopark Texas Grand Prix will go green on Sunday (May 23) at 2:30 p.m. with television coverage provided by FOX Sports 1.

Clean air …dirty air…aero it all sucks! Get out front and no one can pass …same at every race

Bill B
Reply to  jim

Don’t worry. The next-gen car will fix everything.

Why the doubt? After all, the geniuses designed the Car of Tomorrow!

Actually it was a typical Dover race. Lots of green flag runs, not many cars left on the lead lap, JFK – blown away, what else do I have to say?

Chad always did know a little something about Dover.

Yes – like Johnny mentioned, Chad is now running the whole show, so now all four teams get the benefit of his evil genius.

chad over in irl with johnson

Chad is the VP of Competition at Hendrick Motorsports overseeing all four teams.

Chad is the VP of Competition at Hendrick Motorsports.

It’s funny that he fails inspection every week, yet so many believe NASCAR favors him. Just saying……………..