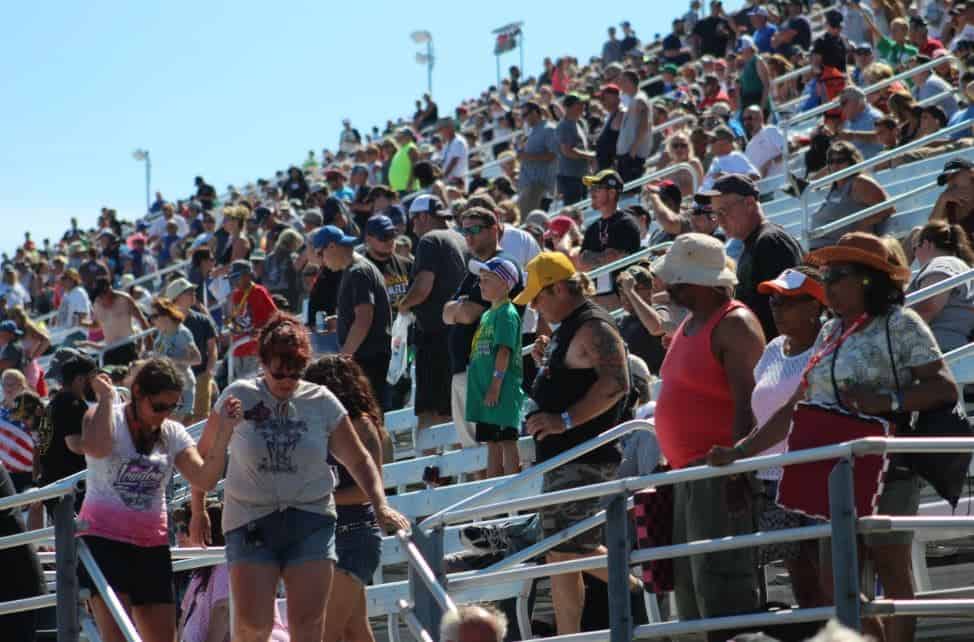 With more tracks opening at 100% capacity, is this a sign that normality is on the horizon for the racetrack experience? — Peter B., Dover, Del.

Speaking from personal experience this past weekend, I can wholeheartedly tell you the answer is a resounding yes.

I’ve covered a handful of races during the COVID-19 pandemic, mostly without fans. Dover International Speedway wasn’t the first race I attended with fans, but it was the first race where the vibe at the track felt somewhat reminiscent of how it was before COVID was a thing.

The midway was hopping, cars flooded the parking lots, lines at souvenir haulers stretched 50 bodies long, fans were snapping photos of Miles The Monster and the grandstands and the cheers in said grandstands drowned out the roar of the engines on the initial start.

A peek inside the midway pre-race ?

Longest lines for merchandise at the haulers of defending Cup champion Chase Elliott, other Hendrick & JRM drivers as well as all Toyota drivers (all 4 for JGR and 23XI’s Bubba Wallace). pic.twitter.com/Ym3QcVE0Sw

.@MonsterMile is offering COVID-19 vaccinations on-site today. It’s the one-dose J&J vaccine and workers told me they’ve gotten “over 100 walk-ups today, which is more than expected.” They got 55 yesterday as well and will be open until 2 pm today. #NASCAR pic.twitter.com/S8nhDpoWhY

Talk about a serotonin boost.

At the risk of sounding incredibly cliché, there was a palpable energy felt before the race on Sunday (May 16). Even a pop-up COVID-19 vaccination center, free to fans if they so chose to get vaccinated and accelerate a return to normal.

As more tracks are scheduled to operate at 100% capacity this summer and fall, similar racetrack experiences can be expected on a grander scale. While NASCAR no longer releases attendance numbers, Dover was able to operate with at least 27,000 fans in the stands on Sunday. Double, and in some cases almost triple, that number to some of the tracks later this season, and things will hopefully begin to feel and look a lot more normal.

“You don’t know a good thing until it’s gone” has never been more evident than over the last 18 months, as fans were not allowed to enter races and bring the lifeblood of the sport back where it belongs. But we’re getting there, party people!

I know Hendrick’s 1-2-3-4 is rare and is a heck of an accomplishment. But how impressive it is really? Where does it stack up with other organizational achievements? Donte H., Omaha, Neb.

From all the dominant teams we’ve seen over the years, it’s remarkable that this has only been done twice in the modern era (Roush Fenway Racing in 2005). Joe Gibbs Racing came oh-so-close before Erik Jones was disqualified from Richmond Raceway in 2019, and I’m sure there have been too many 1-2-3-5/2-3-4-5/1-3-4-5/etc. finishes to count.

Bingo, Clyde. There have been instances in Hendrick’s history where they had four of the quickest cars, but something known as “racing” happened. A flat tire, blown engine, inopportune caution flag, piece of debris, droplet of fuel, the list goes on. To have none of those things happen while running up front, in succession and then to finish it off, going away in dominant fashion, that’s the impressive part.

Since the current playoff format was introduced in 2014, no team has put all four of their cars in the Championship 4. Joe Gibbs Racing came close with three of their four in 2019, but that’s as close as a team has gotten.

Although way early, Hendrick may have about as good of a shot as anybody since the current format’s inception in 2014 to put all four of their cars in. With Alex Bowman already having two wins to his credit, Kyle Larson‘s blazing quickness, William Byron‘s top-10 streak that seemingly will never end and six more road courses on the schedule for Elliott, Rick Hendrick has got to be feeling pretty good about himself.

It’s hard to compare eras, hence why the two times a team finished 1-2-3-4 before RFR did so in 2005 is not considered the modern era. The four-car team idea also is a relatively new idea. Admittedly before my time, many drivers (and owners) were reluctant to bring additional cars into their fleets, thinking it would take away resources and attention from their car that, in their eyes, doesn’t need to be fixed/improved.

The modern-day comparison to a 1-2-3-4 finish would probably be a 1-2-3-4 finish in the championship. Because, in a way, it’s the same as a single race. Gone are the days of a season-long title. It’s a “what have you done for me lately” sport and playoff format now. And if one team is able to hit on it when it matters (in the Round of 8), they’ll potentially make history in the Championship 4.

And also … just like when Martin Truex Jr. put an ass whoopin’ on the field at Darlington Raceway, Hendrick did the same on Sunday. Come to appreciate historic achievements and performances when you see them instead of being quick to judge them for the lack of parity in the lead.

We shall see. Some people just want to go out and act like things are normal, others perhaps not.
Lets see as the season goes along how it goes. I suspect that this will ultimately be another step in the gradual decline of Nascar.

*Most people want to go out and act like normal.

Look no further than Nashville’s official full reopening this past weekend. Looked like the party for the ages.

It will be back to normal when there are qualifying and practices again.

Re: “And if one team is able to hit on it when it matters (in the Round of 8), they’ll potentially make history in the Championship 4.”
If one team ever did that they would almost (barring mechanical failure) be guaranteed to finish 1-2-3-4 because the other 36 guys don’t race the contenders.

Agree – still would take a lot of luck but of all the awful and idiotic aspects of the idea of a playoff to determine a motorsports champion the farce of the final race wins the prize. Just throw the final 4 out by themselves and let them go.

Yet the playoff system which you hate has given us deserving champions every year, including winning the final race. It may not be “fair” to a competitor who is left out due to bad luck or simply his inability to perform under pressure, but it is still better than points racing of the Latford era, when winning meant nothing at all.

The title winner has won the title by winning the final event because NA$CAR won’t allow any other driver to win the final example of Brian’s product. The only way one of the four doesn’t win the event is if none of them finish the event and then the title goes to the driver in the highest finishing position. He STILL doesn’t have to win the event.

Fix the problem where none of the 36 non-contenders race hard for the win and don’t defer to the contenders and we’ll talk. Until then you keep supporting a race that is rigged or, at least, not what it’s supposed to be.
The ONLY thing the Latford system needed to be fixed is to give the winner somewhere between 25 to 50 points more than it did and that would have all but insured that the champion had to have multiple wins.
For you to key in on the few years where the champion had only one or two wins would be like me to point out that a driver could win 35 races and come in second the final race and not be the champion. It would be an exception and not the rule.

“For you to key in on the few years where the champion had only one or two wins would be like me to point out that a driver could win 35 races and come in second the final race and not be the champion. It would be an exception and not the rule.” EXCEPT that it has never happened and it never will. A driver winning one or two races and backing into the Championship HAS happened in the Latford system.

As for your solution to the problem with the Latford system, I would personally go along with it, but it wouldn’t satisfy NASCAR’s need for a Game 7 ending to the season.