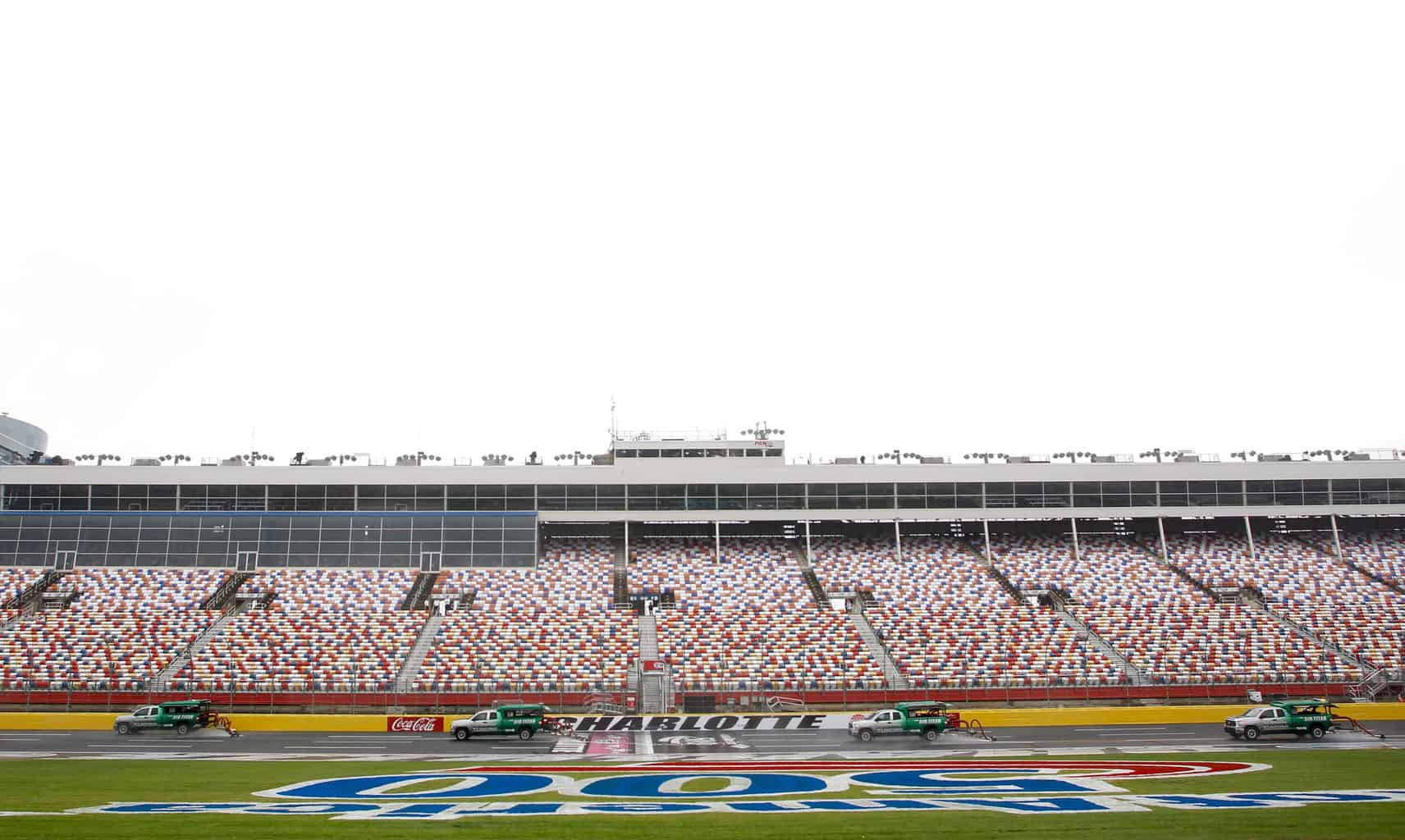 North Carolina Governor Roy Cooper announced that he plans for $30 million of the American Rescue Plan funding to be for infrastructure repairs at Charlotte Motor Speedway, Rockingham Speedway and North Wilkesboro Speedway, according to FOX 46 News.

The funds are part of the COVID-19 relief fund that President Joe Biden proposed.

According to the budget plan, each racetrack would receive $10 million each.

Charlotte is set to host all three NASCAR national series in two weeks.

Rockingham last hosted the Camping World Truck Series in 2013, while the Cup and Xfinity series previously ran in 2004.

Meanwhile, NASCAR last ran at North Wilkesboro in 1996, though iRacing held an event on a virtual version of the track last year.

Camping World CEO Marcus Lemonis recently said he was willing to invest $1 million in North Wilkesboro in addition to building a small Camping World store on the property.

Big thanks to you @marcuslemonis for your support! We are making progress with our internal planning for @savethespeedway ??? https://t.co/Bu2KhNhTr4

Government is a joke. If we are spending COVID funds to support race tracks (one of which hasn’t even hosted a race in 25 years), we obviously don’t need the funds. Every crisis is just another excuse to fund politician’s pet projects.

Yep. I could use a few Mexicans around here. Give us the money, the race tracks can raise ticket prices.

I mean, you’re not wrong… And it’s basically what he’s doing, the impoverished race track owners are going to hire a bunch of local companies and their manual labor to refurbish a playground for people that race cars as a hobby

No dont spend a dime on illegal immigrants send them back if they cant suport themselfs and no food stamps just finish the wall and dont let anyone threw make them follow our laws?

Bill B
Reply to  RH

Yep, this is the problem with trillion dollar stimulus packages, no oversight and money gets pissed away that will be payed for by tax payers one way or another. I didn’t need the stimulus checks I got and would have gladly forgone them assuming that everyone else that didn’t actually need it did the same. Now there are job openings everywhere and we are paying people not to work.

Infrastructure to me means roads, highways, not race tracks!

Why do you allow such evil individuals to live? Death to the Proposers!

30 million could really assist with the affordable housing & homeless crisis here in Charlotte.

I can’t wait. Bring back the old racetracks and preserve our southern sport in the place it all started. This is why NC is the greatest state for in the whole United States.

ANd NASCAR and SMS can certainly afford this on their own. Just another example of the ones who don’t need iit benefiting from the money.

Vote his butt out of office. I could care less about a race car. Just spending money on junk. How about cleaning up our rivers and creeks. Not something that’s just pouring out more pollution!!!

Couldn’t agree with you more! Sick of all politicians at this point. Every thing they do is influenced by the rich

We’d need a Resolution about Rockingham and North Wilkesboro along with Nashville Fairgrounds and Birmingham. I feel that I am getting on my Aaliyah in needing a Resolution, especially if Hometown Auto Racing Outside of Charlotte has not be given the time or the place of day.
What would be sweeter is if we had an All Local Rainier or Furniture Row again, but, that would be veering on teams not just being the Owner, but, consciously employing Locals in that Area.

I would rather see the money spent on improvements to the rail system from Charlotte to the coast.

That money could do so much more if it was used for housing. Whether it is assist people obtain housing or maintain permanent housing!!!

Decisions like this show a lack of concern for people that suffered and still suffering from Covid-related issues!!!

I am a NASCAR fan and also have wanted for yes to see North Wilksboro and Rockingham reopen, 1st NASCAR made the decision to close it ,I would rather see it go to small businesses that closed during the Pandemic , not 10 to 20 yes ago by design, I do understand our state needs more revenue coming in and NASCAR is a great avenue for that , that being said Cooper is just a loose as Biden and all the other dump wreck less Democrat s making up dumb rules and laws. And wasting OUR $$$$ we that WORK hard for. They need to send the 30 million back and cut off unemployment UNLESS you are not able to work NOT because YOU are LAZY then take that $$$$ and reopen these tracks with NASCAR paying half or more being they are the ones that closed them who’s to say they wouldn’t do it again Thanks for reading a concerned Rep. NC Tax payer who loves the US and our NC state may GOD BLESS America

Generally agree with the other posters here in terms of the government being a joke, and how much of this totally unnecessary pork will be looted by the politically connected… but… I’m not quite sure these projects fit the bill.. will they not need to employ people (assuming they actually do something.. a stretch, i know) to bring these properties up to snuff and then employ people again to bring racing back to these tracks (at least as it concerns the Rock and NW?). Or do we just expect Charlotte gets some new luxury suites and the rest gets pocketed?

Pls use the $$$$ on things that benefit all of us

Seriously I cannot believe this. Has the guy lost his mind or joined the GOP? These race car drivers make millions. If they and their sponsors don’t like the track I’m sure they can find a way to make improvements! The middle class which is shrinking by the minute is expected to fool the bill for just about everything-what a total Crock.

Think you might have your political parties confused. It’s ok though – there were roughly 80 million other people similarly confused back in November.

I had a court order to buy Rockingham Speedway, but neither the Sheriff nor the court would enforce the order. Turns out one of Cooper’s friends wound up with the track and has already received $8 million from the State. Now he gets another $ 10 million. The track required nowhere near $18 million to put back in order. Something stinks to high heaven and you can bet Cooper is benefitting from it like he did when he refused to investigate the charges I brought in from of him when he was running for Governor the first time.

@Joy Tomlinson T – Want to take a shot at the big time? Contact this guy, investigate his claims. If verified – write about it.

I love the North Carolina people. They have good sense. Not cents. Love reading your comments.

I guess the State Government can waste millions as well as the Federal.

Outrageous. Not a Democrat or Republican thing. Some lobbyist is spreading money in Raleigh conning our legislators that this will feed the hungry in Wilkesboro while they eat dinner at Sullivan’s. The people who will benefit are the construction companies in the area.