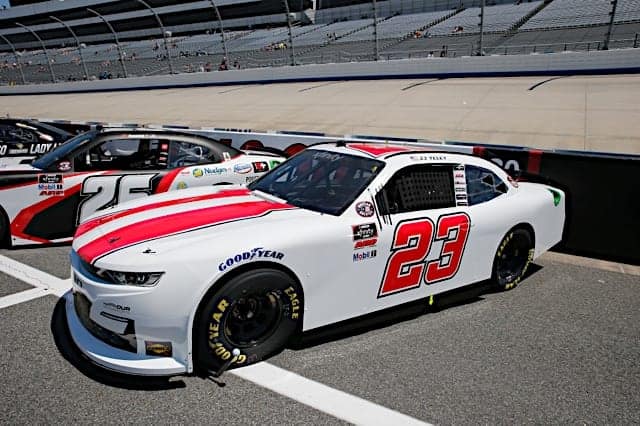 J.J. Yeley turned in a solid top-15 run during Saturday’s (May 15) Xfinity Series race at Dover International Speedway for Our Motorsports.

While it was an uneventful run that saw him finish 14th, just behind teammate Brett Moffitt, there was still a part of Yeley that wasn’t satisfied.

“I love to overachieve, so my goal [Saturday] was to come home in the top 10,” Yeley told Frontstretch in a post-race phone interview.

That goal wasn’t far-fetched. Our Motorsports has had strong runs with both Moffitt in the No. 02 Chevrolet and other drivers in the No. 23 car, the latter of which Yeley piloted for the first time Saturday.

Yeley, though, has had some notable performances of his own in other Xfinity Series equipment this season. Driving for SS Green Light Racing, in affiliation with Rick Ware Racing, Yeley drove to finishes of 12th and 13th, respectively, at Homestead-Miami Speedway and Phoenix Raceway. In fact, his two other races for the team have resulted in top-25s, coming home 24th at Martinsville Speedway and 22nd at Darlington Raceway.

The steady finishes also follow on the heels of a six-race effort in 2020 that saw Yeley score a finish of 12th at Daytona International Speedway for Jimmy Means Racing, as well as 11th at Homestead and 14th at Martinsville for SS Green Light Racing.

With Saturday’s 14th-place effort at Dover, Yeley has found a way to put impressively consistent runs together in limited opportunities.

“I don’t want to take away from my own ability or some of the other teams that I have driven for,” Yeley said. “But obviously, Our Motorsports has some really good equipment. They’re doing everything they can to put themselves in a position to make the [playoffs] and be a contending type of team, especially one that doesn’t have some type of affiliation like a Gibbs or JR Motorsports or even the Penske guys.”

Yeley noted he will be back with Our Motorsports in October for the Charlotte Motor Speedway ROVAL with sponsorship from the United Breast Cancer Foundation for the Drive for the Cure 250. While he stopped short of calling Dover a trial run, he admitted he knows the team has “some holes in [its] schedule.” A good first outing doesn’t hurt.

“They’ve been doing a fantastic job,” Yeley said of Our Motorsports. “The hard work that they put in shows because, again, both cars are virtually identical. I know that the engine package is slightly different between the two, and obviously, we ran right with each other. So no favoritism, no specialties. Just a lot of hard work on everyone’s part to go out there get the best finish.”

The No. 23 team can also use every good run it can get. The Xfinity Series shifts back to qualifying this weekend at Circuit of the Americas, as well as at Charlotte and Nashville Superspeedway, and owner points may play significant roles in which teams make the field. The No. 23 car currently sits 27th in owners points.

“We’re getting into some of these races where we’re going to get back to qualifying,” Yeley said. “And having owner points, or being in a safer position in some of these races, where it looks like five to seven cars may go home, they’re looking for a little security, which was great because then it got me off the couch.”

Yeley has been around the sport for 15 years, making his first NASCAR national series starts in 2004. That depth of experience behind the wheel in a variety of equipment levels can greatly benefit a new team like Our Motorsports, even if quality and experience of its employees aren’t a concern.

“There’s just not as many people,” Yeley said. “Obviously, to have a full roster, it takes a lot of money and a lot of sponsorship to do. They’re definitely having to do a lot more with a lot less, and a lot of small teams, especially in the Xfinity Series, are faced with that challenge.

“I think they’ve been doing a really good job of managing that. And I think the big thing is, it’s a big confidence booster for [crew chief Daniel Johnson] and all the guys that that work on the 23, because I know they’ve already had a handful of drivers come drive that car this year. They’ve had some good finishes; they’ve had some crashes and some lackluster finishes. So I think it’s good for them to go out have a good run, and show that, obviously, they’re capable of running just as good as the ‘A’ car, [that] being the [No.] 02.”

The remaining schedule for Yeley is scattered. He’s scheduled for six more races with the No. 17 team at SS Green Light, the next race on his calendar being Nashville on June 19. But his efforts are focused on finding any sponsorship he can to fill any holes in teams’ schedules to stay behind the wheel.

“We’re actively chasing sponsorship on a weekly basis, trying to solidify some of these races further out, as well as the ones that are the ones that are coming up closer,” Yeley said. “It was nice to be able to drive a race car this week. Obviously, I wish there would have been something on the 23 today, but for those guys, it’s like I said, it’s important for them to have a good finish, keep it up for points and do everything they can for the next guy’s slot in that seat.”

Of course, sponsorship is everything in motorsports. With that often comes disappointment, something Yeley experienced over the offseason while trying to put together a full-time Cup ride with Rick Ware Racing.

“I personally had a crushing blow from sponsorship earlier this year,” he said. “I thought we had everything solidified in December through January for a full-time deal that fell through. I know that they’re still working on their end to come up with some of the funds. There’s a good chance we’ll fill the remaining part of the season, but it’s tough.”

The grind of searching for partners is nonstop, Yeley said, and it’s easy to see how exhausting it can become. Nonetheless, that search continues. Performances like he’s had in the Xfinity Series this year only helps his cause.

“I’ve been lucky enough to work with a couple of different agencies that have been working on my behalf,” Yeley said. “There’s just a lot of networking, a lot of just trying to figure out what’s the next step and finding, again, the sponsorship that’s going to not only give the team the ability to go out there and perform but the same for myself.”

The NASCAR Xfinity Series rolls into COTA for the Pit Boss 250 on Saturday, May 22. Television coverage can be found at 4 p.m. ET on FS1.