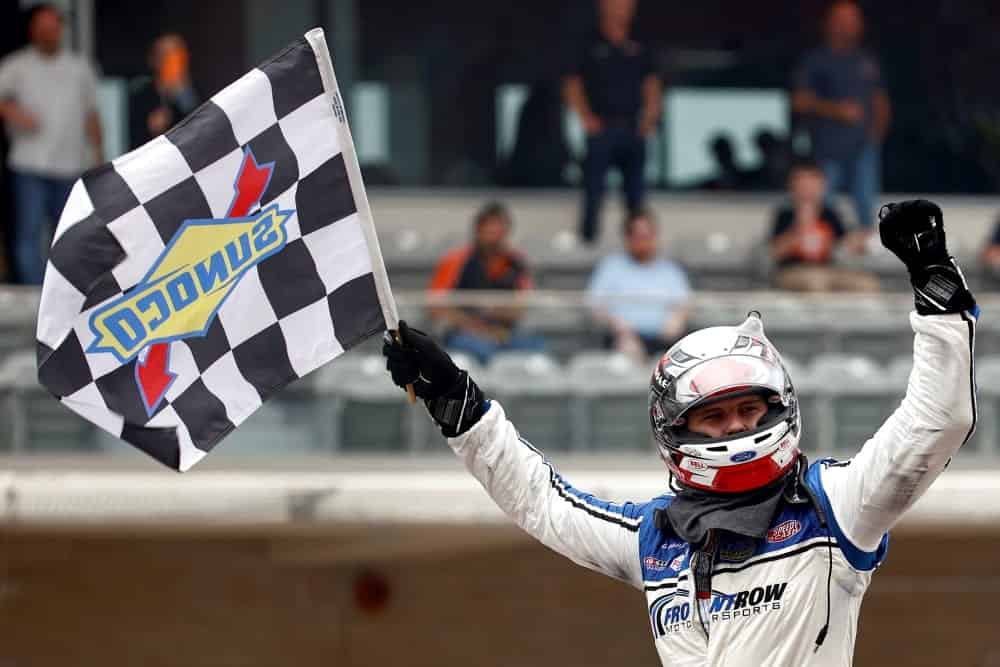 In a race that was full of road course specialists battling in slippery race conditions, NASCAR Camping World Truck Series regular Todd Gilliland took the victory in the first-ever NASCAR event at Circuit of the Americas just outside Austin, Texas.

It is the 2021 DAYTONA 500 Champion race team Front Row Motorsports’ first win in the Truck Series.

“I definitely did a lot of stuff wrong,” said Gilliland, who scored his first truck series win since Martinsville in 2019. “That’s what I love about road course racing. There’s 20-turns here, 20 opportunities to pass and make mistakes.

“We had been building momentum. For my team to finally get this win is just amazing.”

Gilliland also won the $50,000 bonus as the win came in one of the three Triple Truck Challenge events.

It was a race that saw plenty of rooster tails spewing out from behind the deck lids of the trucks, as much of the day’s events had been showered in rain. Despite the slippery conditions, Gilliland appeared to have the fastest truck in the inaugural Toyota Tundra 225.

In stage one, it was all Kaz Grala who dominated until the very last lap when Gilliland hunted down the 22-year-old and made a last-minute pass for the stage win.

Todd Gilliland passes Kaz Grala on the final lap to win the opening stage at Circuit of the Americas. pic.twitter.com/q8jTX3IY12

Unfortunately for Gilliland and his team, the following caution flag pit stops put them at the back of the field after a crew member climbed over the pit wall too soon, resulting in a penalty.

That mistake opened the door for defending series champion Sheldon Creed, who led most of stage two before pitting before relinquishing the lead to Ben Rhodes to pit. Rhodes went on to win stage two – his first of 2021.

When the green flag waved again, it was a 13-lap sprint to the end, with caution flag pit-stops shuffling Creed back to the point. His GMS Racing teammate and race polesitter Tyler Ankrum quickly placed himself in second, and it was a battle of the teammates with Grala and Gilliland close behind.

With 10 laps to go, it was those four trucks slipping and sliding in unison on the rain-soaked COTA surface, battling for the lead until Ankrum finally took it from Creed.

Under normal circumstances, taking the lead with ten laps to go puts a driver in a position to win.  However, the bad news for the 20-year-old, was that he had taken the lead with less than 10 laps to go on a 3.4-mile long road course.

In his quest to get his first truck series win since 2019, Ankrum soon saw his rearview mirror full of the black front bumper of Gilliland, and with six laps to go, Ankrum ran wide and opened the door for the Front Row Motorsports driver to take the lead and, despite a brief scare with Timmy Hill stalling on the long straight, Gilliland then dominated to the white flag never look back.

Grala also got past Ankrum to finish second, Grant Enfinger crossed the line in fourth followed by Creed.  Sam Mayer took sixth with Carson Hocevar finishing in seventh.  Rounding out the top 10 were Zane Smith, Austin Hill, and Rhodes.

Paul Menard, making his first Camping World Truck Series start since 2007, ended his day in the 11th position after starting 26th and being scored as low as 35th.

The next stop for the Camping World Truck Series is Charlotte Motor Speedway on Friday, May 28 at 8:30 p.m. ET. on FS1.