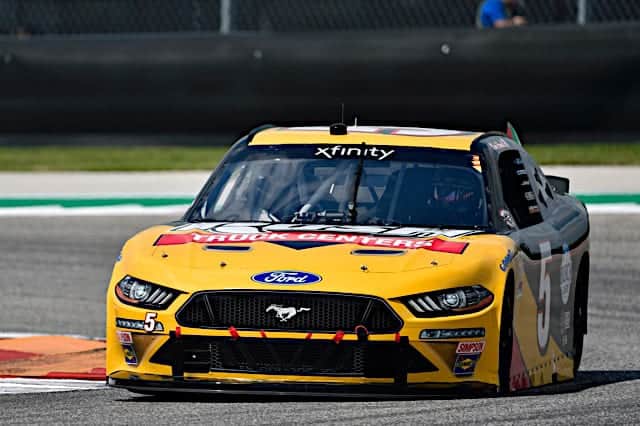 With a fourth-place finish in Saturday’s (May 22) inaugural NASCAR Xfinity Series race at Circuit of the Americas, Kevin Harvick scored the best finish of BJ McLeod Motorsports’ history.

A finish like that might not seem like much for the NASCAR Cup and Xfinity series champion, as he has 47 career NXS wins to his credit. But the result was astronomical for BMM, one of the underfunded teams of the Xfinity garage.

It marked only the team’s second top five, with the first coming at the hands of David Starr at Daytona International Speedway in July 2017. And it was the sixth-year team’s fourth ever top 10 and first since Matt Mills finished 10th at Daytona in July 2019.

All three of the team’s previous top-10 finishes came on superspeedways, so Saturday was by far the team’s best-ever outing at a road course.

“It’s just a big effort from everybody on this to have that,” BMM owner BJ McLeod told Frontstretch. “That’s our best finish ever as a team too. I just like it for all of our people and everybody that’s worked hard to get us to this point. It’s an awesome day.”

It’s unusual to see Harvick piloting anything other than a Stewart-Haas Racing Ford these days. But with COTA being added to the Cup circuit this year, Harvick sought out an Xfinity ride to get him reps on the track the day before the Cup Series competes at the road course for the first time ever.

McLeod’s Cup team that he co-owns with Matt Tifft and drives for the majority of the time, Live Fast Motorsports, has an alliance with SHR, so a collaboration between the duo for COTA just seemed to make sense.

Harvick and McLeod put a deal together for the race, with Harvick getting in BMM’s No. 5 Ford usually driven by Mills with sponsorship from SHR sponsor Rush Truck Centers.

“We just thought it up together with the new track on the schedule for Cup,” McLeod said. “He [Harvick] wants to win. This guy’s competitive. Like that’s one of the things I respect the most about him is he’s been here for, I believe this is his 20th year. And he is still trying to find edges to be able to win. And that’s really hard to do in this sport.

“There’s not many people that have had two decades worth of success in the past. And he gets to say he’s one of the few. But the reason why he is one of the few is he was out there busting his butt in this Xfinity car today trying to get better for the Cup race tomorrow. And I just have a ton of respect for that.

“I just really appreciate everything from the Harvick side and everyone over there.”

BMM swapped points before the race to allow for Harvick to have points for the No. 99 entry, the team’s highest car in the owner points. Still, Harvick had to qualify to make the show, as even the car directly above the No. 99 in owner points (Josh Williams) failed to make the race.

Harvick qualified the car in the 12th spot. But he never really showed top-five speed until the race’s final run when he climbed his way up the top 10 and all the way to fourth.

“I’m just super proud of what he did,” McLeod said. “I was sitting up on the bridge watching him, and he just was doing an incredible job wheeling that thing. Which we all know he can, right? We watch it every week.

“But it’s just cool to see him do it with our number on the side of it. It was just, it was special.”

With a handful of new tracks for Cup to race on this year, the possibility remains for Harvick to get back in the BMM No. 5 later in the season.

“We’ll see what happens,” McLeod said on if Harvick will be in any more races. “We’ve got all our scheduling to do after we get home, and we’ll figure it out from there.”

The owner’s points gained from Harvick’s effort will make it much easier for the No. 5 to make the field next week at Charlotte Motor Speedway.

“I haven’t looked at any of that yet,” McLeod said about how the results set the team up for the future. “We’re the kind of people that just work day-by-day and try to improve on what we’re doing.

“We’ve definitely had a rough year. We’ve got more speed than we’ve ever had with all of our cars, all of our teams. And it’s just been one week, something happens with the car, one week, there’s a mistake somewhere else. We’ve just had a hard time putting finishes together since the second race. This is a good step in the right direction to try to get that momentum. We need to get all three teams performance to their fullest potential because we definitely have better potential this year than we’ve ever had.”