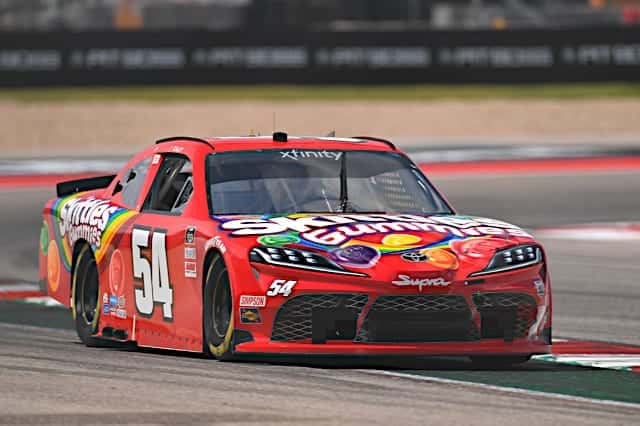 Kyle Busch, the all time leader in NASCAR Xfinity Series wins at 97, won the pole for the Pit Boss Grills 200 at Circuit of the Americas.

This is the 69th pole in Busch’s career in the series. COTA marks the first of five starts for the two-time Cup Series champion in NXS competition this season.

Starting second will be last-second substitute driver Ross Chastain. Chastain, who was the fastest in the first round of qualifying but finished behind Busch in pole qualifying, was named to the No. 07 SS Green Light Racing Chevrolet this morning after the team’s usual driver, Joe Graf Jr., pulled out of the race due to injury.

Reddick will make the first start all season for Jordan Anderson Racing, Austin Dillon qualified 17th for Bassett Racing’s first start of the year, and Preston Pardus was able to get a third car in the DGM Racing stable into the show in 22nd.

The session began in full wet conditions, and the rain continued to pound down throughout both rounds.

There were two red flags in the session, the first for the stalled car of Currey eight minutes into round one. Currey was the lone driver to not complete a lap in qualifying. The second red flag in the session came when Noah Gragson drove into the gravel trap outside of turn one and got stuck, requiring the car to be pulled out.

The number one reason to ignore this event. Are there any walls he can hit when he overdrives the car to make it get faster?

Normally I would not watch the Xfin race just because he is out there (Harvick as well), but I am really interested in seeing how this track races. I guess I will just have to get my kicks hoping he wrecks himself.