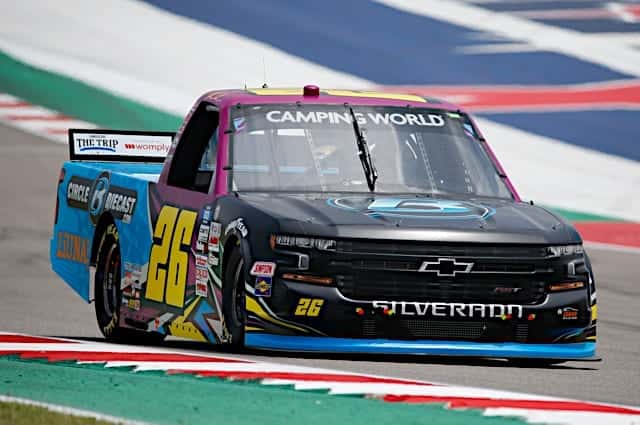 As if qualifying a NASCAR Camping World Truck Series truck on the complex 3.41-mile long Circuit of the Americas for the first time ever wasn’t hard enough, Tyler Ankrum also had to do it in the rain.

Despite the tricky weather conditions, Ankrum still grabbed the pole for today’s inaugural truck series race at COTA with a time of 75.041 mph, narrowly edging out round one winner Kaz Grala by only two tenths of a second in the last five seconds of the session.

Retweet to congratulate @TylerAnkrum on his NASCAR Truck Series POLE at @COTA! pic.twitter.com/ockASnTcsY

Sheldon Creed, Matt Crafton and Todd Gilliland round out the top five.

Another notable was Cameron Lawrence qualifying seventh in his NASCAR qualifying debut driving for Reaume Brothers Racing. The 2015 Rolex 24 class champion finished the last session with the time of 74.168 mph.

It was the first qualifying session for the Truck Series since Daytona International Speedway, as the qualifying heats for the Bristol Motor Speedway dirt race was rained out in late March.

Ryan Truex’s engine blew at the end of the session, so he’ll drop to the rear for an engine change after qualifying 12th. Tanner Gray also had to change engines but was last in the lineup. Other drivers dropping to the rear include Lawless Alan due to a transmission change and Austin Wayne Self and Chase Purdy due to unapproved adjustments.

Today may see the possibility of two rain races on the same day, with the NASCAR Camping World Truck Series Toyota Tundra 225 at 1 p.m. ET. and the Xfinity Series Pit Boss 250 at 4 p.m. ET. Both races will be broadcasted on FS1.