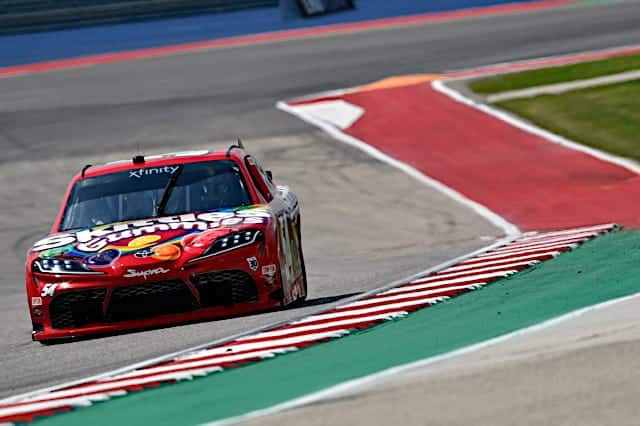 The inaugural NASCAR Xfinity Series race at Circuit of the Americas started with Kyle Busch leading the field to green. Many have grown accustomed to Busch’s ability to smack the field with his performance, and in Saturday’s Pit Boss 250 at COTA, Rowdy didn’t hold back. Not only did Busch lead 35 of 46 laps, but he also crossed the finish line with over an 11-second lead over second-place AJ Allmendinger. It was his 98th career win but was only his third victory on a road course in 16 starts. He previously won at Autodromo Hermanos Rodriguez in Mexico City back in 2008 and Watkins Glen in 2017. Busch has now won on 27 different race tracks in the Xfinity Series.

Despite Busch’s dominating performance, Circuit of the Americas delivered and was a successful race for the NASCAR Xfinity Series. While there may not have been abundant battles for the lead, there were battles throughout the field. Bumpers were used, runoffs were taken advantage of, and the noses of charging competitors filled gaps. When looking at the big picture, COTA lived up to the road course racing name NASCAR has developed in recent seasons. Let’s see what 2022 brings, especially if next season’s edition doesn’t have Busch on the entry list.

After the season-opening race at Daytona International Speedway, one of the big stories was that the NASCAR Xfinity Series would not hold qualifying sessions until this weekend at Circuit of the Americas. Jordan Anderson announced in the offseason that he would be opening up an Xfinity Series program. After qualifying for Daytona was rained out and with no owner’s points to fall back on, that meant the new team would have to wait until COTA to have a chance to race.

Enter two-time Xfinity champion, Tyler Reddick. He was tasked to practice, qualify, and drive the Jordan Anderson Racing No. 31 Chevrolet. Reddick was immediately fast in the rain during qualifying. He placed the car into the second round of qualifying and finished with a fifth-place effort. The team went for points in the first stage and finished second to start the race, collecting nine ultra-valuable points. Reddick was classified with an eighth-place finish by the end of the race, totaling Jordan Anderson Racing with 38 points. While that isn’t enough to break into the top 40 in owner’s points, the team will get another chance to qualify and collect more points next weekend at Charlotte Motor Speedway.

Joe Graf Jr. told his team on Saturday morning that he was experiencing knee pain and didn’t believe he could handle the race. The SS-Green Light Racing organization called on Ross Chastain to replace Graf before qualifying. Chastain put the car in the top 12 in the morning’s first 25-minute qualifying session and followed it up with a 2nd place qualifying effort. But things turned for the worse when Chastain missed a corner and was immediately handed a pass-through penalty. Chastain wheeled the No. 07 Chevrolet to pit road to serve the penalty but instead made the hard left turn toward the garage with a broken axle. The team was able to repair the car and returned to the track before the conclusion of the first stage. Chastain soldiered through the remainder of the race, moving up six positions in the running order due to attrition.

The inaugural trip to Circuit of the Americas was not kind to Noah Gragson. In qualifying, he beached his JR Motorsports Chevrolet while trying to improve his starting position and ultimately started 20th. Then as the field completed the 14th and final lap in stage one, Gragson seemingly spun and stalled in Turn 15. Minutes later, Gragson was out of the car, and his car sat on the hook of a tow truck. It was later revealed that the engine failed and dropped all the oil out onto the track. Much like his JRM teammates, the No. 9 team has shown plenty of potential for speed but has had horrendous luck and now has four DNF’s through 11 races. Road courses have typically been kind to Gragson, as he’s never finished outside the top 10 before this season. Earlier this season, he battled his way back onto the lead lap after his car failed to crank at Daytona on the road course before crashing in a late-race multi-car incident.

On top of that, through 11 races last season, Gragson had led in 10 of them. This season he has only led in four. With an average finish of 18.5, that won’t cut it to make the playoffs if Gragson and his team can’t find a way to shake the bad luck off or find a playoff-clinching victory soon.

I’m going to give a shoutout to Spencer Pumpelly as well. It was his first career start in the Xfinity Series. Pumpelly has several wins in sportscar racing in North America, including two class victories in the 24 Hours of Daytona. Pumpelly was brought in by Johnny Davis Motorsports to drive the No. 6 Chevrolet to help improve the team’s chances of making the race and maximizing owner points. When you look at how the No. 6 has run in its first 10 races with Ryan Vargas (nine starts) and Landon Cassill (one start), it has only finished inside the top 20 once and top 25 four times. Pumpelly averaged a top 20 run and ultimately finished 19th. It was a solid day for Pumpelly, and it was the best finish among the three JDM Chevrolets to start the race (Cassill 22nd and Colby Howard 28th) as Jeffrey Earnhardt failed to qualify in the fourth car.

“I’m kicking myself right now because I never won at Montreal (Circuit Gilles Villeneuve) but every other road course I’ve won at.” – Kyle Busch

“Well, AJ and I both have A-L-L at the beginning of our last name, so it’s easy to confuse us.” – Justin Allgaier

I’ve been an advocate for more road courses on NASCAR schedules for many years. Today may not have featured classic battles for the lead, but Circuit of the Americas put on an excellent show for the Xfinity Series. The original 2021 Xfinity Series schedule had six road courses (COTA, Mid-Ohio, Road America, Watkins Glen, Indianapolis GP, and the Charlotte ROVAL). I believe that six is a solid number for the Xfinity Series. With that said, I believe COTA deserves another few years to prove it’s worth a racetrack for stock cars because I think the racing will only improve.

Strategy played a role in how the Pit Boss 250 played out on Saturday. Allmendinger elected not to pit during the caution before the one-lap shootout to end stage one. Arguably, this is when he lost the race. Had Allmendinger pitted there, he doesn’t spend as much time mired back in traffic while  Busch enjoyed clean air on his car. Strategy is what makes road course racing often exceptional in NASCAR and other forms of auto racing. To that point, I think road course racing in NASCAR could benefit from the removal of one stage in the race by placing the only stage break far enough beyond the first fuel run. Right now, road course racing in NASCAR, from a strategic side, can be a little too predictable.

It’s a short trip next week for the NASCAR Xfinity Series. The Alsco Uniforms 300 at Charlotte Motor Speedway will go green at 1:00 p.m. on FS1 and PRN on Saturday, May 29. After Charlotte, the calendar flips to June, and the Xfinity Series will visit four vastly different tracks. On June 5, Mid-Ohio Sports Car Course returns after being dropped in 2020 due to COVID-19. The series travels back to Texas on June 12 for the first of two trips to Texas Motor Speedway. Nashville Superspeedway makes its triumphant return after nearly 10 years away from NASCAR on June 19, before Pocono Raceway closes out the month of June on Sunday, June 27.