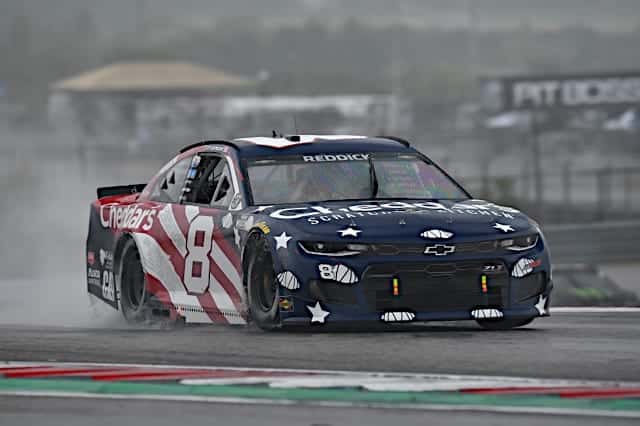 Nearly 3.5 miles and 20 turns await the NASCAR Cup Series on Sunday (May 23) at Circuit of the Americas in Austin. So, too, does a decent chance of rain, which hovers around 40-50% for the duration of the EchoPark Texas Grand Prix.

Sunday marks the first time NASCAR’s premier touring series has visited the Texas road course. Christopher Bell is the most recent winner at a road course, scoring his maiden Cup win with a triumph at the Daytona road course in February

A total of nine cars will start at the rear of the field for unapproved adjustments: Aric Almirola, Denny Hamlin, Chase Briscoe, James Davison, Chris Buescher, Anthony Alfredo, Erik Jones, Cody Ware and Daniel Suarez all move to the back.

NEWS: The following cars will start from the rear of the field today at @NASCARatCOTA due to unapproved adjustments.

Hamlin’s adjustments involved his power steering, which he had issues with during qualifying on Sunday morning.

Cup drivers had some experience driving in the wet on Saturday (May 22) when rain fell during practice, but dry conditions pervaded qualifying early Sunday morning. Tyler Reddick scored his first career pole during the session, with Kyle Larson set to start alongside him on the front row. Austin Cindric, Kyle Busch and William Byron round out the top five drivers rolling off the grid. Reddick’s pole is the first for Richard Childress Racing at a road course in 25 years; Dale Earnhardt was the last to do it for the team, coming at Watkins Glen in 1996.

Busch won Saturday’s Xfinity Series event, which was also held in dry conditions. Busch, Reddick, Cindric, Kevin Harvick, A.J. Allmendinger, Cole Custer, Justin Haley, Austin Dillon and Ross Chastain all competed in the Xfinity event to prep for Sunday; outside of Busch’s victory, Allmendinger, Harvick, Cindric, Custer, Reddick and Haley all finished in the top 10, while Allmendinger and Haley each won a stage.

Formula 1 has raced at the track since 2012 and IndyCar since 2019, though neither series visited during last year’s pandemic restrictions. COTA is one of three new road courses to hit the Cup schedule for 2021, alongside Road America and the Indianapolis Motor Speedway layout.

The Cup Series’ event at COTA will take place on a day chock-full of racing: F1’s Monaco Grand Prix was held earlier in the day, with Max Verstappen winning over Carlos Sainz, while IndyCar’s Fast 9 and Last Chance qualifiers for the Indianapolis 500 will be held at 2:30 p.m. ET.

Tune in for coverage of the EchoPark Texas Grand Prix at 2:30 p.m. ET on Fox Sports 1.