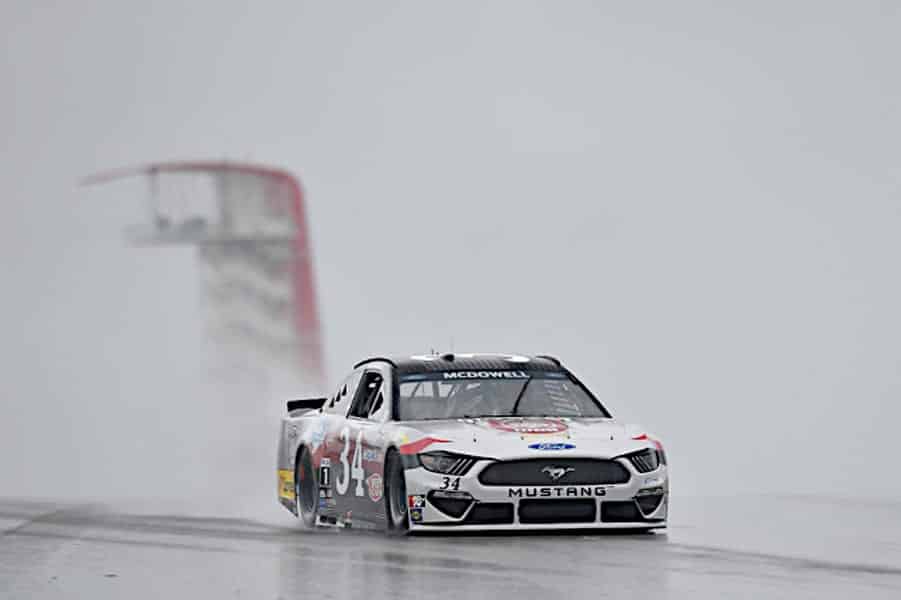 Before Sunday, the 2021 NASCAR Cup season was already solidified as the best of Michael McDowell‘s career to date.

That happens when you start it by claiming your first career Cup win in the Daytona 500.

But 14 races into the season, McDowell hasn’t disappeared. In fact, he’s continued to put together the best campaign of his 14 years in NASCAR.

The latest example came in Sunday’s race at the Circuit of the Americas, where McDowell finished seventh in the rain-shortened event.

See also
The Art of Racing in the Rain: Chase Elliott Prevails at COTA

The result gives the Front Row Motorsports driver a career-best five top-10 finishes. That tops his total of four from 2020.

It came after McDowell led three laps and was able to finish second in the first stage to Joey Logano. That was made possible after the No. 34 team was one of the few who didn’t switch from wet to slick tires during the pre-race pace laps.

However, the 36-year-old called the top 10 “bittersweet.”

“I wish I could have beat Joey for that stage,” McDowell said. “That stage point would have been nice, but he was just a little bit better than us. We got stage points and ran in the top 10. We passed a lot of cars, so it was a great day for the Outwest Express Ford Mustang.”

The rain-soaked event wasn’t all good news for McDowell.

“The beginning of the race wasn’t too bad,” McDowell said. “We started out on kind of a damp track and then obviously rain started coming down. It was a lot of fun in the first little bit, but those restarts, once the rain started really coming down was so treacherous.”

That became apparent after two violent wrecks in stage 2 when track visibility was limited. McDowell took the blame for the second crash.

It occurred on a lap 25 restart and involved Martin Truex Jr. and Cole Custer. It began when Truex ran into the back of McDowell’s No. 34 Ford.

A huge and frightening hit for Cole Custer and Martin Truex Jr. at Circuit of The Americas. pic.twitter.com/dGmCoXQPx6

“Once the cars got single filed out you were OK, but as soon as you got within four or five car lengths of a car it was pretty tough to see, and it always is in the rain, but a little bit different in our cars. And then at the end with the heavy rain our cars just hydroplane so bad that you just go down the straightaway and lose it, so those are always really dangerous when you’re hydroplaning down the straightaway. But, at the same time, it’s the same for everybody so you’re always in the same conditions and have to manage them the best you can, but at the same time I felt really unsafe at the end there just making laps by myself trying to hold onto a top-10 finish.”

Despite having a background in road racing, McDowell’s top 10 Sunday is just third on a road course in the Cup Series. All of them have come in the last two years.

Including his win in the Daytona 500, McDowell’s top 10s this season have come on the Daytona road course (eighth), Homestead (sixth), Talladega (third) and his seventh at COTA.

Going into next weekend’s Coca-Cola 600, McDowell is 16th in the point standings.

Michael is the feel good story of the season. He’s more than paid his dues. Nice to see him get paid back.