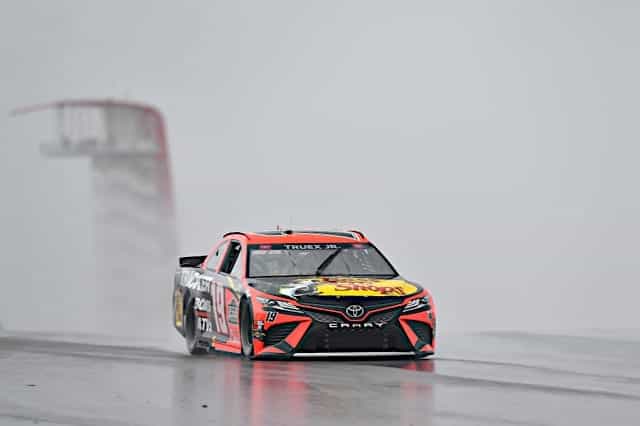 The NASCAR Cup Series’ EchoPark Texas Grand Prix at Circuit of the Americas had gone smoothly for the most part, with an opening stage featuring just one caution and a couple of single-car spins here and there.  However, chaos struck four laps into stage two and again after the green flag waved.

With little-to-no visibility speeding down the long back straightaway at the Austin road course between both the rain and the rooster tails spraying off the cars, Kevin Harvick braked hard to gauge the turn and braking zone, but with the adverse conditions, Bubba Wallace couldn’t see the slowing No. 4. Wallace’s No. 23 piled into the back of the Ford, jacking Harvick up into the air and nearly rolling the car over before it bounced back down onto all fours.

The incident also involved Christopher Bell, who ended up against the guardrail with heavy damage to his No. 20, while Ryan Blaney spun by himself elsewhere on the track. Blaney also had significant damage to the right rear of his Ford Mustang.

That was a wild one. pic.twitter.com/ZUZKBO2HWa

“I don’t exactly know what happened,” Bell said after being released from the care center. “I don’t know if they were wrecking up there or what, just going down the straightaway blind and we just ran in the back of somebody. Very disappointing day, was really looking forward to running our Craftsman Camry today and had a lot of fun in practice yesterday, but once you get out there in the pack it’s just so hard to see, you’re racing blind.”

“[…] One of those things that, once you got midpack, you just couldn’t see what was going on,” Wheeler told FOX Sports’ Jamie Little. “Earlier, [I] tried to coach [Wallace] about braking points going into [turn] 12, but he’s just like ‘I can’t see.’ […] I think the [No.] 4 car was coached to check up, but he was going 100 miles an hour, we just ran into the back of him because we couldn’t see more than five feet in front of us.”

Harvick also had thoughts along the same lines.

#NASCAR … More from my conversation with @KevinHarvick … “It’s unbelievable that we’re out there doing what we’re doing.” pic.twitter.com/zF3DLkRMmA

This was followed by a violent, eerily similar crash in similar conditions involving Michael McDowell, Martin Truex Jr. and Cole Custer: Truex clipped the back of a slowing McDowell, flipping the No. 19’s hood up over the windshield and forcing Truex to also slow down. Custer, unable to see, smashed into the back of the No. 19, pushing the Toyota into the air and nearly over on its roof, and slammed into the guardrail himself.

No clear replay showed exactly what happened in the former, but some overhead and onboard angles were shown for the latter.

Custer echoed what Bell and Wheeler had said.

“I’m all good,” Custer said about the crash. “It didn’t hurt as much as I thought it was gonna be […] it’s just, you can’t see anything. It’s pretty bad, you can’t see a foot in front of your car. I was just rolling down the backstretch […] I didn’t even know he even got damage at that point. But yeah, you can’t see anything and by the time I got to him […] it just sucks. I’m just so frustrated about having our day end like this. It just kills the car, it’s just really frustrating [and] not fair to all our guys. It’s just [that] we can’t see anything.”

"You can't see anything."- @ColeCuster after his frightening crash at @COTA. pic.twitter.com/OpeBqOmqm3

“The only way to describe it is you can’t see anything,” Truex said after he was checked and released. “You’re just mashing the gas and going through the gears on the backstretch, praying that nobody’s gonna be there. All of a sudden, I see a taillight flash […] it happens that fast, when I’m going that fast, and then my first thought was ‘once I hit that guy, just stay in the gas and keep going,’ because I knew they were coming from behind.

"It's dangerous."- Martin Truex Jr. after his scary incident with Cole Custer at Circuit of The Americas. pic.twitter.com/QwoBIyiJkz

“And, literally, next thing I know, I get drilled,” he said. “There’s just nothing you can do in those situations. […] I literally couldn’t see anything, and I had to pit and we got off sequence, we were in the back there and it’s really, really hard to see back there. It’s really hard to race like that if you’re not the top couple cars, I’m not sure how we could make it easier or better.

“But it’s dangerous and you just go down the backstretch every lap praying there’s nobody having an issue, praying there’s not gonna be a crash or a car stopped or whatever because you’re just wide open, can’t see anything. So, unfortunately, like I said, wrong place, wrong time.”

A lengthy red flag waved after the latter incident for cleanup and track drying. Once the stage resumed, Kyle Busch drove away from the field to capture the green-and-white checkered flag.

It looks like Wallace is to good to speak to pit reporters he said he didn’t want to talk. If he would have got run into he would have been all mouth using that prison talk “he disrespected me like he has said before. When you run in the middle and the back shit happens. What a joke. Wise up jordon or your sponsors will be gone.