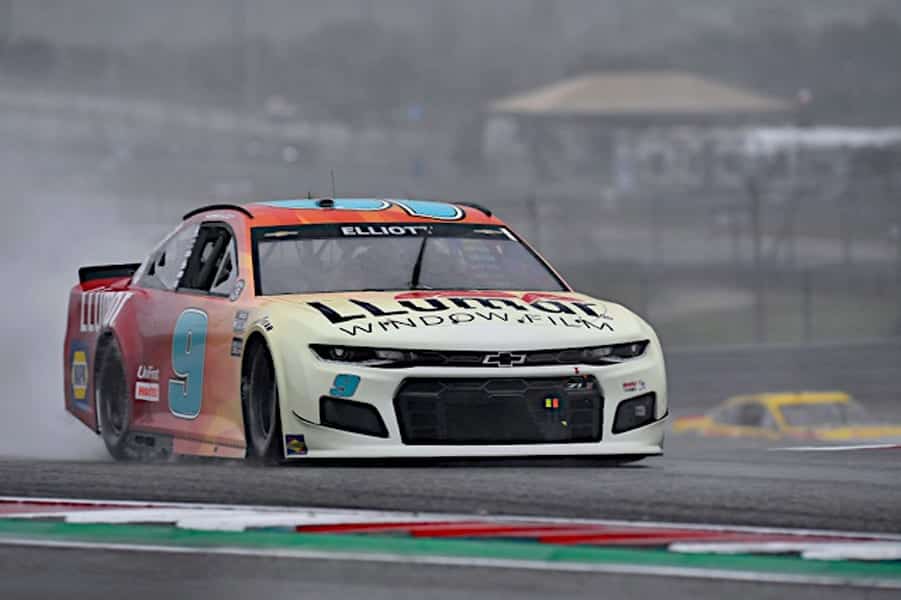 The NASCAR Cup Series raced through monsoon-like conditions with a veil of mist and rooster tails for most of Sunday (May 23) afternoon at Circuit of the Americas in Austin, Texas.  The conditions culminated in NASCAR calling the race, with Chase Elliott out front when they did.

Intensifying rain later in the event forced NASCAR’s hand, sending the field to pit road and bringing out the red flag. The sanctioning body ended the race just short of the full distance and Elliott scored his first victory of the season.

It was the 800th NASCAR triumph for Chevrolet, and Elliott became the 11th different winner of 2021 in a race marred by several massive crashes.

“Couldn’t be more excited,” Elliott told FOX Sports 1 after the race. “I’ve never won a rain race before, so that’s kinda cool. Just super proud of our team for just continuing to fight. To start the day, we weren’t very good. Just kept pushing myself, kept making some good changes throughout the day and got to where I thought we were on pace with those guys there at the end, so really proud of that.

“It’s not the greatest thing ever, for it to rain [and] to have a rain-race win if it’s your first one, but I think it’s okay if it’s down the road. So I’m pretty excited about that and looking forward to next week and trying to keep it rolling.”

Teams had the choice to put on slicks or rain tires prior to the race, but a huge chunk of the field had to pit after the green flag waved; as Austin Cindric shot to the lead on slicks by first-time polesitter Tyler Reddick, rain began to fall and those that dove onto pit road made the switch to wet tires.

Road-course experts Cindric and AJ Allmendinger held the top two spots until they both had to pit with the rain falling harder, and Martin Truex Jr. and Michael McDowell became the respective heirs to first and second. Those two were out front until the first caution of the afternoon flew. Daniel Suarez suffered transmission issues on his No. 99 and had to be pushed by the safety truck.

McDowell and Bubba Wallace stayed out, but Joey Logano scooted into the lead and won stage one by a comfortable margin over McDowell.

The first stage ended up mostly shrouded in mist and light rain and wasn’t without incident. Corey LaJoie, Denny Hamlin and others spun around but resumed racing, while contact between William Byron and Matt DiBenedetto inflicted damage on both cars.

Stage two, however, was a bit more eventful: it was just a few laps old when the first of two significant wrecks occurred as rain began to set in even more.

Mere moments after the green flew once again, another horrific crash took place on the back straightaway: Truex rear-ended a slowing McDowell, which flipped the No. 19’s hood over his windshield. Truex slowed some, but a flying Cole Custer, who couldn’t see a thing, smashed into Truex’s car, nearly rolling it onto its roof and sending Custer into the guardrail.

When all was said and done, countless drivers emphasized that they couldn’t see a thing out of their windshields, which led to both of those crashes.

The third and final stage featured racing much calmer than the earlier laps and was without any huge incidents, but NASCAR did switch to single-file restarts… at least until the skies opened up once again.

Kurt Busch hydroplaned and his No. 1 nearly piled into Austin Dillon and Busch’s brother Kyle’s cars.

Kurt Busch threads the needle and stays in the gas. #NASCAR | @COTA pic.twitter.com/1HH6FojjBp

Elliott built a lead of more than 10 seconds over the second-place car and teammate Kyle Larson, sitting in the top spot when the red flag waved as the rain overwhelmed the track.

“I just kept pushing myself harder and harder,” Elliott said of his late-race charge. “There were some areas on track [that] were getting actually really treacherous, I felt like. The back straightaway was puddling up and you’re starting to hydroplane and do some weird stuff, so my only option was just to kind of send it through those spots and hope for the best, so like I said just really proud of our team. Two in a row for Hendrick Motorsports […] couldn’t be more proud of Chevy.”

Retweet to congratulate @chaseelliott and the No. 9 crew on their rain-shortened WIN at Circuit of The Americas!@TeamHendrick | #NASCAR pic.twitter.com/dAktUDOs6I

“[…] Just proud of our team,” he added. “We’ve had kind of an up and down year. To come here and to fight, [it’s] not the ideal way to win but we’ll definitely take it and move on down the road.”

The Cup Series heads back east to Charlotte Motor Speedway this week for the Coca-Cola 600, which is set for 6 p.m. ET on Sunday, May 30 with coverage on FOX.

“PREVAILS”????????? The term makes it sound like he won it fair and square, imo. Nascrap gets a tingle in their legs just looking at the guy…imo. A rain stopped race, racing in the rain? How silly. It reeks of manipulation, imo. A newbie race should not have ended this way. IMO. But the favorite child of the NASCAR family, it is a natural selection, imo.

Very much reminds me of several weather-affected races that were gifted to Gordon in the 90’s. And then come the media robots with a stack of stories about how he was going to win it anyway.

Chase was leading by 13 seconds when NASCAR threw the caution. There was standing water on the track. How bitter you must be to criticize that win!

When they said elloit could not make it to the end on fuel. My 8 year old son said they will stop the race now so elloit can win, and guess what he was right, what a giant joke of a race

I hope you’re not teaching your “son” to spell – or to be a sore loser. The joke is on you.