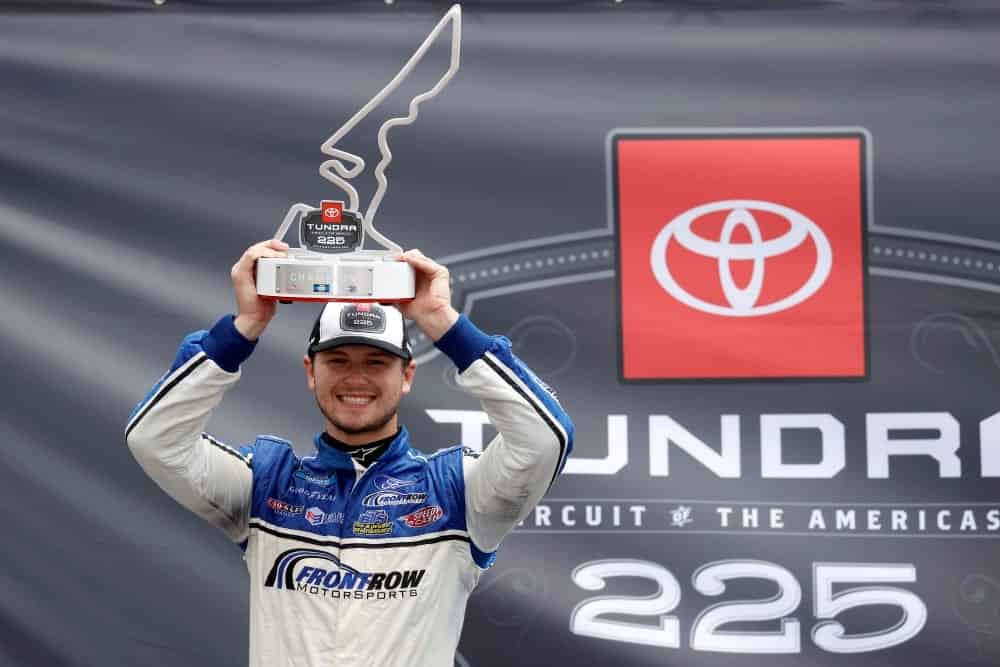 In a Nutshell: Todd Gilliland snagged his first win since 2019 in the Camping World Truck Series’ inaugural visit to Circuit of the Americas in Austin, Texas Saturday afternoon. The driver of the No. 38 recovered from an early penalty for a crew member over the wall too soon to score the first victory for Front Row Motorsports.

“I definitely did a lot of stuff wrong but that’s what I love about road course racing, there’s 20 turns here, 20 opportunities to pass but also make mistakes,’’ Gilliland said. “Last year we didn’t quite have the season we knew we could and just to come out here and win early, we’ve been building momentum and for my team to get this win is just amazing.’’

Kaz Grala finished third, followed by polesitter Tyler Ankrum, who led four of the final 10 laps. Grant Enfinger, driving the No. 9 for Rohrbaugh Racing this week, and Sheldon Creed rounded out the top five.

Gilliland, whose win was his fourth top 10 in the last five races, also snagged the $50,000 bonus in the second of the Triple Truck Challenge events.

Sheldon Creed led almost the entirety of stage two before giving up the top spot to pit before the stage ended. In theory, track position was more important than the stage points, especially for a team that scored its first 2021 victory the last time the Truck Series raced at Darlington. And when the field took the green flag for stage three, Creed had the track position after other pitted under the final yellow.

Though he did take off as the green flag flew, it took just four laps for Tyler Ankrum and then eventual winner Gilliland to take the top spot, while Creed settled into a fifth-place finish.

One spot short of the win, but hey we will certainly take a P2 finish!!! So proud of everyone @youngsmtrsports and grateful to get a shot behind the wheel! I’ll keep grinding for more opportunities like this… they definitely knew we were here today. ?? https://t.co/JcpxM4vRwt

Solid day for the @diecast_b #26 @GMSRacingLLC today @COTA. Won the Pole, p3 finish. Wish it had kept raining. @ToddGilliland_ and I have been racing along time together. Congratulations on his win!

Hey @marcuslemonis @GoodSamFamily and all of CR7 Motorsports thank you! P4 proud of the effort! pic.twitter.com/zwyTthlxAW

No. of rookies in the top 10: 1; Carson Hocevar, finished seventh

P.7, good points day and solid finish for being not much of a road course driver. @NieceMotorsport did helluva job swinging on adjustments. Ready to get back to ovals! pic.twitter.com/sQsSnd8JRJ

Point Report: After posting just his second finish outside the top 10 this season, John Hunter Nemechek remains at the top of the standings with a 31-point advantage over Ben Rhodes. Sheldon Creed sits seven markers behind Rhodes in third, followed by Austin Hill. Race winner Todd Gilliland moves up one spot and sits fifth.

Matt Crafton dropped one position and is sixth in the standings, followed by Grant Enfinger and Zane Smith, who both moved up one spot. Stewart Friesen dropped two positions to ninth, and Carson Hocevar, up one spot, rounds out the top 10.

Lots of fun today, was pretty decent in the wet and got extremely tight once it started to dry out, lots of positives on the day. Thank you team! @GMSRacingLLC @TeamChevy

Another great top 10 for this #BretHolmesRacing team. Proud to be a part of it. All I can say is that this track needs to be on the schedule permanently!!!! Such a blast!

I hate the word luck but damn. Flat LR as soon as we get to the front. Drove from the back up to 8th in the final stage.

Talk about a close call?. Y’all need to lay off @Tjmajors ? he’s the best in the game and does a great job. I’m super thankful to have him apart of my team. I had multiple spotters that race and he couldn’t see that corner from where he was spotting https://t.co/IrwNeMW8aD

Up Next: The Truck Series heads to Charlotte Motor Speedway next Friday night for the final race in the Triple Truck Challenge. Coverage for the North Carolina Education Lottery 200 begins at 8:30 p.m. ET on FOX Sports 1.