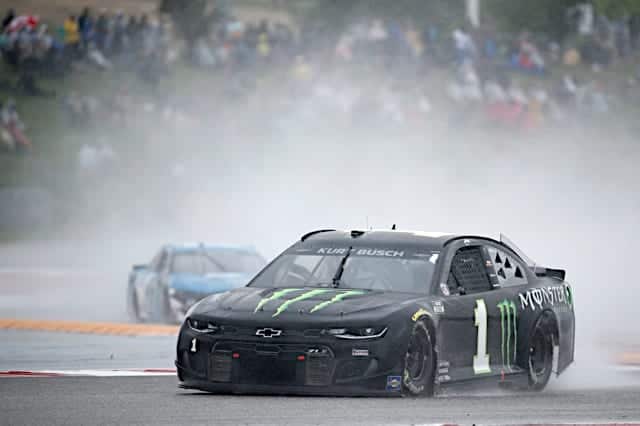 1. COTA was pretty fun … except when no NASCAR driver could see anything

It’s not clear how anyone at NASCAR can make a solid determination about whether the national series should return to Circuit of the Americas in 2021.

On paper, COTA seemed like it would make for an amazing addition to the NASCAR schedule. It’s a huge road course full of visual appeal. And so many turns — 20 in all — plus those jaw-dropping hills. With road courses becoming a bigger emphasis this season, it was certainly a calculated risk worth taking.

A little rain? Sure, that’s fun too, as there is an undeniable extra element of skill to whipping a stock car around under wet conditions. As evidence, please watch those opening laps of the Texas Grand Prix again and marvel at how Austin Cindric was wheeling his ride on racing slicks while most everyone else had already gone for rain tires.

The problem was it didn’t stay at just a little rain, leading to some of the most hazardous driving conditions for Cup Series drivers in recent memory. Yes, it’s dangerous to drive in tight packs at 200+ mph on the superspeedways lap after lap, but mashing it onto the back straightaway at COTA while not really being able to see anything ties or surpasses that.

With so much water involved, it was less a question of if disaster would strike but when. To say it’s fortunate Martin Truex Jr. and Cole Custer are OK is an understatement.

The red flag has been displayed, and both drivers have climbed from their vehicle under their own power. pic.twitter.com/Tc5iRTTMGt

NASCAR made all the right moves after that wreck, going to single-file restarts, sending out the jet dryers to tackle the worst areas of standing water, and eventually calling it a day and giving race leader Chase Elliott his first victory of 2021. But as is the case a little too often, something bad had to happen to force their hand.

Fortunately, this is a common sense fix. There’s no reason to do away with wet weather road course racing, NASCAR simply has to be more diligent about deciding when it’s raining too hard to continue. When you can’t see the cars you’re approaching? That’s a good measuring stick.

As for COTA, the racing was fine when the cars were tight together, but all three races featured cars just checking out from the field at various times, and the circuit is so big that they rarely even had to navigate lapped traffic while doing so. It’s possible the eventual verdict will be that the track simply isn’t made for great racing in stock cars, but it very well take a few more trips there with dry weather to know for sure.

2. Will any teams matter in the hunt for the Championship but Hendrick and Gibbs?

Now that the defending Cup Series champion has earned a victory, it’s worth discussing how the same season that might (though it’s unlikely) give us the first 16+ winner campaign in the playoff era is also the one displaying how little parity there is overall.

Hendrick Motorsports has five wins in 14 starts, including a two-time winner in Alex Bowman and whatever Kyle Larson‘s ridiculous collection of second places is worth. Joe Gibbs Racing has done just as well, with five total victories and Denny Hamlin making it unnecessary to even check to see who’s atop the traditional points from week to week.

You can throw Team Penske into this conversation, because it’s the top Ford team and has three of the remaining four victories. They certainly help make our case for a lack of parity, even if none of their three drivers has the feel of a championship contender right this second.

Then there’s Michael McDowell and his feel-good Daytona 500 triumph, and that’s literally it. Stewart-Haas Racing, Richard Childress Racing and Chip Ganassi Racing, all organizations that could be expected to grab a few wins of their own, have combined to go 0-for-everything.

A lot can change before the playoffs begin, and if you value upsets, maybe the way this season is playing out is the rare argument for the NASCAR playoffs because someone might be able to sneak into the last four. But for the time being, it’s looking like a Hendrick vs. Gibbs slugfest, with a driver from one of those teams winning it all this fall.

This actually makes for a nice segue from the previous topic, as Roush Fenway Racing used to be one of the top dogs in the sport, especially in the early 2000s. With those glory days slipping further and further away and Jack Roush pushing 80, it’s well past time to consider a big swing to regain some relevance. Bringing Brad Keselowski in as a driver and part-owner, which has been heavily reported (originally by Jim Utter of Motorsport) over the past week, would definitely qualify.

It’s possible that Kes may regret this move in the short term, because he’ll be going from a contender to a rebuilding job, in the parlance of stick and ball sports. It could take a few seasons to get RFR back to a place where it can push for wins, much less a Cup Series title.

(Let’s all agree, however, that he would inherit a valuable asset in perennially underrated Chris Buescher, should he stick around as a teammate.)

Still, this is a move for the medium to long term that would benefit both Keselowski and Roush. Brad K. is a smart, observant driver who isn’t afraid to lobby for things he thinks will benefit the sport, and by all accounts, a shrewd businessman as well. It’s hard to imagine RFR as it exists right now ever expanding back to three or four cars and competing for the best talent. With Keselowski in the mix, that’s easy to envision. As weird as it will be to have a Team Penske without him, it will add a whole bunch of intrigue to the next decade or so if NASCAR if he chooses to buy in.

4. Is it time to just call the All-Star Race a potential test for new rules?

Even though it’s been said a million times before, the truth about the NASCAR All-Star Race is something that still gets kicked around on the Frontstretch Slack: the whole concept of the NASCAR All-Star Race is silly. In other sports, it’s a rare opportunity to see the best athletes all in the same game (even if said game looks nothing like the sport in its weekly form, looking at you NFL, NBA and NHL). In NASCAR, the supposed best stock car drivers in the world compete in the same events all season long. If you want to see, say, Elliott and Hamlin battle door to door, you just need to keep tuning in and you will.

Add in the idea that so many drivers can get into the field of the All-Star Race now and you have something that is simply not what it says on the cover. It’s mostly stars, plus a few other people, and is basically just a race with unusual rules and a slightly smaller field.

So maybe NASCAR should simply lean into it and ‘fess up. Just come out and say, “yes, we’d like to have a mid-year race with no points on the line so we can test out new rules for next season or sometime down the road.” Retire the term “All-Star” and just make it the “Midseason Fiesta” or whatever marketing wants to call it. A bunch of money can still be won, some teams can still get an extra week off, and it’s no more ridiculous than what we have now.

And failing that, at least bring back the pit crew challenge. Those peeps are all-stars too.

5. Does absence make the heart grow fonder at the track?

As the COVID-19 vaccine continues to find its way into arms and states around the country are working on legitimately opening back up, it’s fair to wonder whether NASCAR fans who may not have taken in a race in person for years could return to the fold. Those chances to see the sport in person were easy to take for granted in the past — and declining attendance estimates at tracks around the country bore that out — but now feel more like missed opportunities thanks to the events of the last 14 months.

To a person, the drivers have talked about how great it is to have people back in the stands. The fans who have made the journey since NASCAR started allowing them to return are equally stoked, or at least that’s how they look on TV.

Could that lead to a mini-resurgence of enthusiasm for at-race crowds that continues into next season? It’ll be interesting to find out.

1. Of course seeing is important and NASCAR should better define the conditions in which they will try to run the race. I hope COTA is on the schedule next year, it is a beautiful track and should produce a race at least as compelling as the average 1.5 miler.

2. On paper no, it should be HMS or JGR. However, with the current playoff format, what happens now has little bearing on who makes that final race. Ask Harvick.

3. Only if RFR is willing to increase their financial budget.

4. Who cares. The All-Star race is a joke. The let too many in from the Open. The only driver that should be included is the one that wins the Open. No stage winners, no fan vote. An All-Star race is supposed to exclusive, not inclusive.

5. Yes. It’s human nature.
Don’t it always seem to go
That you don’t know what you’ve got till it’s gone
They paved paradise, put up a parking lot

errrrr…make the “All-Star” race a more selective race. Only this years winners and last years winners. 4 20-lap segments with the last inverted. Would be fun. But I hope they have the Next-Gen car this year for the race. That would be epic. COTA was fun-NASCAR needs to leave the element of “danger and surprise” in the races; the drivers know what they’re getting into.

this year’s allstar race will be an exercise in confusion.

LOL
It’s gotten to the point where they all have been an exercise in confusion, and for more than a decade.

Totally an exercise in confusion and most of the time produces an absolutely boring race (at least for the past decade).