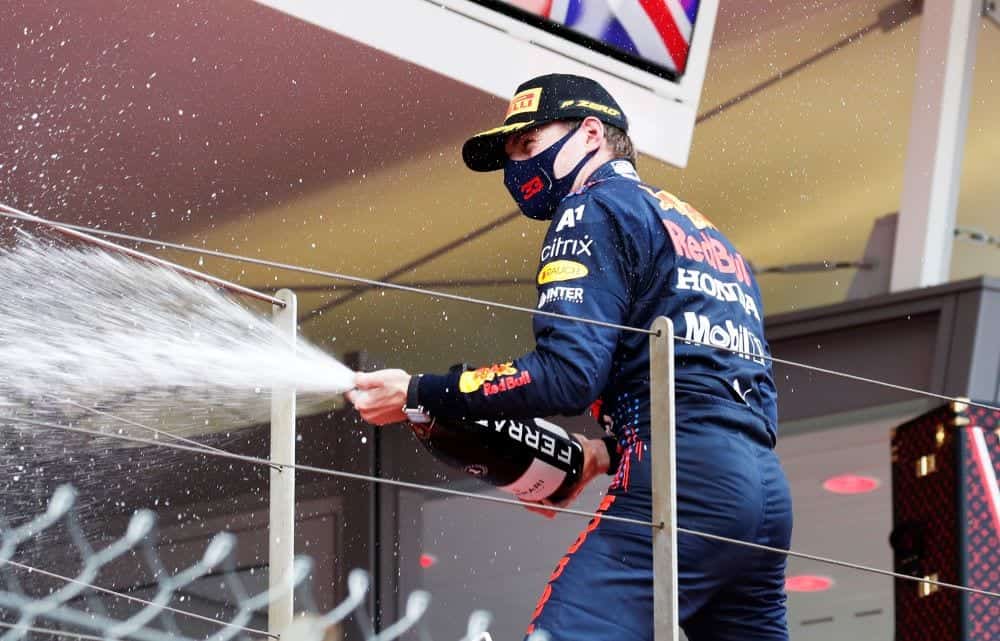 Max Verstappen was essentially gifted the pole position for the Monaco Grand Prix after Charles Leclerc withdrew with driveshaft issues.  Though he started in the second spot, Verstappen had no one alongside him and enjoyed a clear getaway at the start.  And that was all he needed.

Verstappen managed the entire race, giving up the lead only through pit stops and never faced any real challenge.  Carlos Sainz, who finished second, never really got closer than four seconds to the leader and Verstappen enjoyed finishing on his first podium by finishing first in the GP with Serena Williams waving the checkered flag.  The victory puts Verstappen first in the driver standings with a four-point lead over Lewis Hamilton (105-101) and also pushes Red Bull to first in the constructor standings by one point (149-148).

The BBC broadcast team referred to the race as a processional and it is hard to argue against such a statement.  Verstappen gained a spot by Leclerc missing out on the race.  Lando Norris earned a spot when Valtteri Bottas retired due to a weird wheel-nut snafu.  Sebastian Vettel appeared to be the big mover by gaining two spots with an excellent show of form and winding up fifth.

The Monaco GP is a throwback.  Even though there is little passing in the event, the spectacle makes it worthwhile and it holds a level of prestige that most of the other stops cannot match.  For Verstappen and Red Bull to take the win is more about reaching a celebrity status than recognizing they are the team to beat.

Lewis Hamilton has only three Monaco wins (2008, 20114, 2019) but also has seven championships.  His former teammate Nico Rosberg only has one championship but also has three Monaco victories (2013, 2014, 2015).  Such a comparison shows that Monaco is not the predictor of things but instead a win to be enjoyed and revered.

Verstappen will enjoy the spoils thusly.

– Sebastian Vettel looked like, for at least one race, that he had rediscovered his form as he placed fifth.  The somewhat surprising result earned the four-time champion the Driver of the Day award.

Vettel qualified eighth but with Leclerc dropping out, gained a position from the start.  Even a seventh-place finish would have been solid, but Vettel placed ahead of both Hamilton and Gasly and looked more comfortable in his Aston Martin in Monaco than he has all season.

Whether or not the result is a harbinger of improved performance from both team and driver is questionable.  Monaco is an odd track and teams typically build one-off cars for the event but the positive result should surely help provide some energy to an organization that has underperformed thus far.

– Oh Ferrari.  If there is any one team that manages to get in its own way as part of its organizational ideology, Ferrari is that team.

After Leclerc bounced his car into the barriers on Saturday, the team had reason to believe that it was compromised.  Though the Prancing Horse looked the car over extensively and believed it could hold the pole for Leclerc, everything fell apart on the warm-up lap on Sunday.  Leclerc barely made it halfway around the track before he experienced a failure and shut down his Ferrari. That was that.

Charles will not start the race due to an issue with the left driveshaft which is impossible to fix in time for the start of the race. #MonacoGP

The team had every reason to believe that the car was damaged but acted with a sense of hubris in its unwillingness to give up P1.  Rather than take a five-place grid penalty by swapping out parts and pieces, the team tried to send Leclerc on his way and wound up getting nothing for the weekend.

While Carlos Sainz scored second in the race the battle with McLaren for third in points is going to be tough all year and having Leclerc fail to race looks like a boneheaded move.  The fortunate outcome is that McLaren also only gained points from one of its drivers and is only two points ahead (80-78).  But throwing away points for the Prancing Horse and throwing away a race for Leclerc is a mystifying and disappointing Sunday.

– How often does Mercedes manage to find itself in this category?  Maybe once a year?  Once every two years?  This weekend is one that everyone at Mercedes would like to forget.

With Bottas posting a DNF, he dropped to fourth in the driver’s standings.  Of course, he dropped out of the race after pitting from second and team being unable to remove the right-front wheel nut.  The nut machined itself onto the axle and could not be unthreaded bringing a catastrophic result for the Finn who now has two DNFs on the year.

In conjunction, Mercedes brought Hamilton in with too narrow a margin to clear Gasly to maintain position.  Basically, Gasly’s lap on old tyres was faster than Hamilton’s on new hard tyres and that was the difference.  Vettel added to Hamilton & Co’s misery by making the overtake work to perfection to pip both Hamilton and Gasly.

If there is anything that can be said for the Silver Arrows it is that they come back strong from its misfortunes.  With Baku next on the schedule, there is little reason to believe that team and drivers will not be back to form.  But for this weekend, Mercedes depart humbled.

– Lando Norris scored McLaren’s first podium at Monaco since 2011.  The third-place finish was the second podium of the season for Norris and backs up his signing of a two-year contract extension this week.

This season is showing the improvement of both Norris and McLaren and offers optimism that the team is overcoming its poor results of the past few years.  Or maybe it would provide that optimism if Daniel Ricciardo were able to keep pace with his younger teammate.

Ricciardo snagged sixth at the last race in Barcelona and looked like he was finding his comfort level with McLaren.  But finishing 12th and being lapped by Norris suggests that Ricciardo might not be able to keep pace.  While Ricciardo is eighth in the points, Norris is third and holds a 32-point gap (56-24).

If the team is truly going to regain its form at the front of the grid, it needs Ricciardo to show the form that is expected of the seven-time GP winner.  At the moment, the team looks like the tale of two drivers and one of them might just be holding McLaren back.

– Charles Leclerc after failing to make the race he would have started from pole said, “Sad. Just very sad. It’s a very difficult one to take and I also feel sad for the team because they’ve been checking everything.”

“A lot of emotions obviously in the helmet,” he explained. “It’s a track that means something very special for me, I mean that’s for every driver that’s race is at home, they want to do well and I’ve never finished a race in Monaco. This year I start from pole and I don’t even start it so it’s a difficult one to take but it’s like this.

– Verstappen on his win.  “I’ve never been on the podium here and then the first time it’s a win, so it’s a bit of redemption for the other races I’ve had here…a massive thank you to everyone in the factory and here at the track, we won the Monaco Grand Prix so let’s enjoy it.”

– Vettel seemed to offer a non-plussed response to his fifth-place result, stating matter-of-factly, “We have waited for that. A very important day for all of us, for the team and the guys. A good message also for everyone back in the factory. Monaco always has the potential to be a special race and it came our way this weekend.”

– Hamilton kept his cool after his substandard result. “This has definitely been a poor weekend overall in terms of our performance, but this team has shown time and time again, how we come back fighting. There’s no finger pointing, we win and we lose together – we just need to find our feet and stay cool, we have 18 races left and there’s a long way to go in this fight.”

Monaco is as much a wild card in F1 as the restrictor plates are in nascar. Still it is good to see that Ferrari now has two top flight drivers. Something they havent had in a few years.

I think the only racing pass was on the first lap in the hairpin between the two Haas drivers.
Where was Princess Charlene at the trophy presentation? No reporting on that, but a lot of other buffoonery between Crofty and Ted Kravitz.

All true. But this track, and yes it is difficult to pass on, is as much a part of the history of the sport as any other.
The good news is its not clean air that makes the difference. And as LeClerc showed you can be really fast yet in a moment its all gone.
Ever watched them run Monaco in the rain?