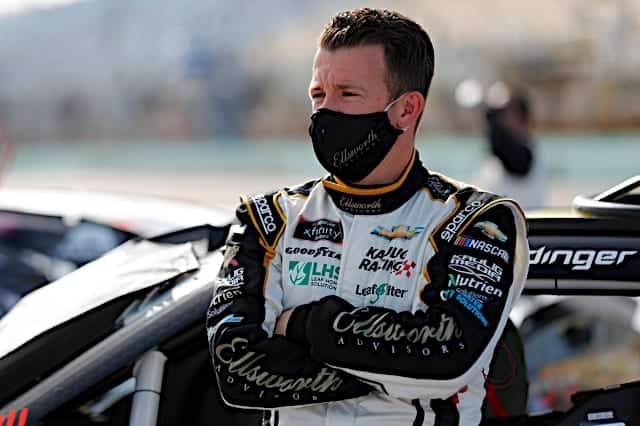 AJ Allmendinger may be no underdog on a road course, but the 39-year-old veteran became a bit of a Cinderella story Sunday (May 23) at Circuit of the Americas. While his team, Kaulig Racing, has established itself as a powerhouse in the NASCAR Xfinity Series, it has limited experience at the sport’s premier level.

In fact, the EchoPark Texas Grand Prix at COTA marked Kaulig’s fifth-ever start in the Cup Series and Allmendinger’s second Cup race with that program. But just like his 2021 debut at the Daytona International Speedway road course, the ‘Dinger came through with a top-10 finish that raised eyebrows.

The Kaulig-Allmendinger success story started with qualifying, just the second time it’s happened on track this season for the NASCAR Cup Series. The No. 16 Chevrolet turned in a fast lap, good enough to qualify in the seventh position.

As rain began to fall on at COTA, Allmendinger used his road course expertise, driving up to third on the first lap. After putting on rain tires, he was able to hang around the top 10 before pitting during a caution late in stage one that shuffled the running order. The No. 16 Hyperice Chevrolet ultimately ended stage one of the race in 19th.

After starting stage two in the 13th position, Allmendinger immediately guided his Chevy inside the top 10. Poor visibility led to a couple of yellows, including one that triggered a red flag late in the stage. Allmendinger avoided the carnage, pitting under caution after the first accident and gradually worked his way up. Despite restarting 17th with four laps to go in the stage, Allmendinger sprang up into the top 10 for an eighth-place stage result.

Allmendinger spent a good majority of his time in the top 10 during the final stage, climbing into the top five before his final stop. In the end, a fifth-place finish was the team’s best at the Cup level, their third top-10 effort in just five starts. It bests Allmedinger’s seventh-place result at Daytona’s road course and Kaz Grala’s sixth-place showing at Talladega Superspeedway. These performances certainly help the program build as they attempt to field a full-time Cup operation in 2022.

Michael McDowell was another road course expert who shined at Circuit of the Americas. The 2021 Daytona 500 winner turned in an eighth-place result at the Daytona road course in February, then bettered that by one position Sunday in NASCAR’s opening act in Austin, Texas.

McDowell was one of the few drivers to start out on rain tires, a move that paid off nicely. As teams made trips to pit road to change tires, McDowell drove up from his 23rd starting spot to eighth place. The move gained him track position under caution, even giving him the lead with six laps remaining in stage one. He held onto it for a couple of circuits, achieving a milestone of 100 career laps led in the Cup Series. After fighting for the lead with Joey Logano, McDowell took the green-white-checkered of the opening stage in second place.

The Phoenix, Ariz. native was able to stay inside the top 10 for a bit despite sliding back in stage two. But after a restart following a multi-car crash, poor visibility derailed McDowell. Checking up to avoid contact with cars in front of him, McDowell got plowed into from behind by Martin Truex Jr. While Truex got the worst of it after collecting Cole Custer, the No. 34 received significant damage to his rear end in the process.

Thankfully, it was not enough to ruin McDowell’s day. Following repairs, the Front Row Motorsports Ford drove back up to 17th by stage’s end.

With just over 30 laps to go, McDowell took his Outwest Express Ford Mustang back into the top 10. The slippery conditions suited his style well as the No. 34 marched through the field, getting as high as fifth before making a pit stop with just over 20 laps remaining. After cycling through track position, McDowell found his way back up to seventh before the race was called for rain. The result is McDowell’s fifth top-10 finish of 2021, eclipsing his previous career-high of four. It also kept him in the 16th position in points as he looks to clinch a playoff berth with his Daytona 500 win.

Ryan Preece continued to prove his worth for JTG Daugherty Racing, leading the field for two laps en route to a 15th-place finish. It is his second straight top-20 result, his first pair of back-to-back top 20s since the Daytona road course and Homestead-Miami Speedway.

Behind Preece, it was a rewarding week for Front Row Motorsports. In addition to the team’s first NASCAR Camping World Truck Series victory with Todd Gilliland and McDowell’s top 10, rookie Anthony Alfredo earned his second best career finish of 18th.

Spire Motorsports also had a respectable effort. Corey LaJoie drove up to a fifth-place stage two result to earn six points. Despite a couple of spins on the wet track, Lajoie slotted in 20th place.

On Saturday, the NASCAR Xfinity Series took to the 3.41-mile course as well. While he is a two-time series champion, Tyler Reddick earned team owner Jordan Anderson his first NXS top 10 as an owner in the team’s debut. Preston Pardus made his second start for DGM Racing, earning his first top 15 of the season in 14th. Jade Buford used his prior road racing experience to run 15th, the rookie’s career-best performance. Finally, Spencer Pumpelly deserves a shout out, earning a 19th-place result in his NASCAR Xfinity debut.

Over in the NASCAR Camping World Truck Series, Kaz Grala made the most of his second opportunity with Young’s Motorsports, nearly winning the race with a strong runner-up showing. Sam Mayer continued to exemplify his potential for stardom, earning Bret Holmes Racing its second top 10 with a sixth-place run. And Camden Murphy earned his second top 20 in as many 2021 starts with a 19th-place finish for Spencer Davis Motorsports.

The typical summer kickoff for race fans, Memorial Day Weekend, is when the Coca-Cola 600 rolls around. All three series will head to what is a home race for many NASCAR organizations at Charlotte Motor Speedway. A crown jewel event, the “grandaddy of them all” brings out military appreciation, patriotic paint schemes and a test of man versus machine.

The attrition and challenge of the sport’s longest race will test many underdog teams. Over in Cup, look for someone like Daniel Suarez and the Trackhouse Racing team to step up to the plate. The No. 99 team has improved greatly over the 2021 season and put together a top-10 result just last week at Dover International Speedway.

In the NASCAR Xfinity Series, I’m expecting Brandon Brown to have a solid weekend. He finished eighth in last year’s Alsco 300, a key momentum builder in his run to the NXS playoffs. And the NASCAR Camping World Truck Series will once again provide parody for many underdog teams to earn strong showings. Can Young’s build on their runner-up effort, even if Grala isn’t behind the wheel?

So grab an ice cold Coca-Cola, thank a veteran, and sit back for one of the most anticipated weekends each year.

No photo finish this time… @AJDinger and the No. 16 @Hyperice Chevy have earned us our first ever @NASCAR Cup Series top-five finish!

The race is official @COTA! ?

What did you think about racing in the rain? ? pic.twitter.com/cQQstlZy4q

Top 10!! Amazing drive by @TylerReddick and so proud of our whole team for never giving up… Thank you to everyone that was a part of this!!!! pic.twitter.com/M68qw7HhHH

Extremely proud of the DGM 91 team! We had a great rally in the final stage going from P22 to P14 and battling it out with some Xfinity and Cup regulars. Definitely a great run we can build off of!@dgm_racing_ | @XfinityRacing | @NASCAR pic.twitter.com/lcEmVLZ1rr

.@buforjm and the No. 48 @bigmchnvodka @SpikedCoolers team have scored their first top-15 finish of the season!

One spot short of the win, but hey we will certainly take a P2 finish!!! So proud of everyone @youngsmtrsports and grateful to get a shot behind the wheel! I’ll keep grinding for more opportunities like this… they definitely knew we were here today. ?? https://t.co/JcpxM4vRwt

Another great top 10 for this #BretHolmesRacing team. Proud to be a part of it. All I can say is that this track needs to be on the schedule permanently!!!! Such a blast!