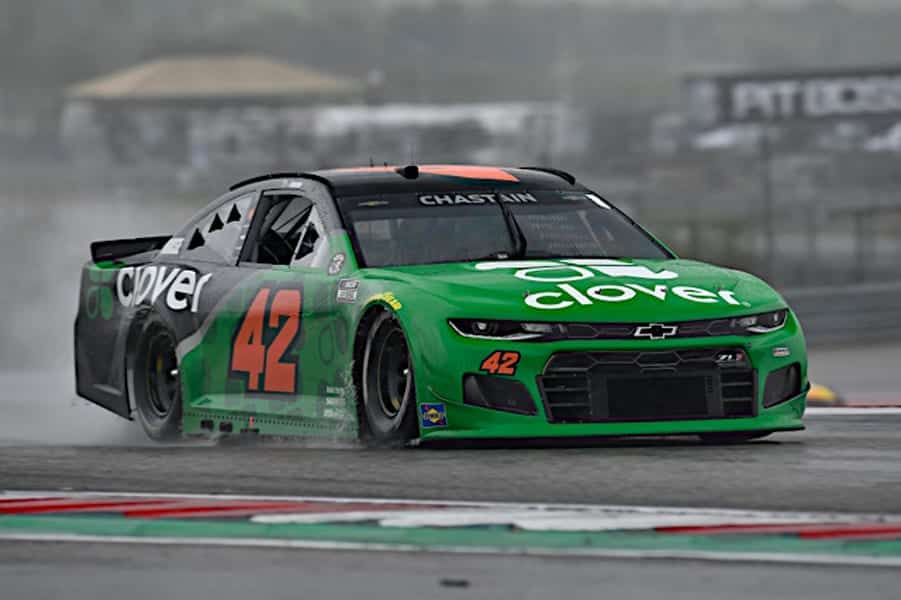 NASCAR’s inaugural weekend at Circuit of the Americas (COTA) in Austin, Texas featured plenty of surprises.  But one positive outcome that most fans might not have anticipated was a great run for Ross Chastain.

Chastain is in the midst of his first full-time NASCAR Cup Series season with Chip Ganassi Racing.  Prior to 2021, he had competed in 79 Cup races with the vast majority of those starts coming with teams that lacked significant funding.  As a result, Chastain has gained more fame from his exploits in NASCAR’s other national divisions.

In 2019, he competed in the Camping World Truck Series with previously unheralded Niece Motorsports.  Niece was a relatively new team with little success to its name, but Chastain scored three wins and 19 top 10s in 23 starts, ultimately finishing second in points.  He remains the only driver who has won for Niece in the Truck Series.

Chastain is also a two-time winner in the NASCAR Xfinity Series, though that statistic only scratches the surface of his story in that division.  Unlike a lot of his contemporaries, Chastain was not a highly-touted prospect as he came through the ranks of stock car racing.  He also lacked the consistent support of a major sponsor.

That meant Chastain had to spend a lot of his Xfinity career fighting to stay visible in the sport.  His admirable results with Johnny Davis Motorsports, another team with limited funding, caught the eye of Chip Ganassi.  In three appearances in Ganassi’s Xfinity cars in 2018, Chastain scored a win, a second and a 25th in a race that he dominated before a dustup with Kevin Harvick.

Ganassi’s plan was to have Chastain compete in Xfinity full-time for 2019.  But in an unbelievable twist of fate, CGR had to close its Xfinity team over the offseason after its primary sponsor was revealed to be a Ponzi scheme and shut down after a federal investigation.

The loss of this opportunity with Ganassi sent Chastain back to the Truck Series with Niece, and then to Johnny Davis’ team for the occasional Xfinity start.  Later in the season, Chastain got a chance to run some events with Kaulig Racing, with whom he scored his second win.  He parlayed that into a full-time gig with Kaulig last year, earning 27 top 10s and finishing seventh in points.

First career Top-5 for the #MelonMan!

???@RossChastain proved himself in the rain today, battling for the lead and finishing P4 after the race was called for weather. What a drive! ??#NASCAR | #RC42 pic.twitter.com/VMEdaN6pjx

All the while, Chastain maintained an aura of untapped potential about him.  Except for a few races in a substitute role for Ryan Newman at Roush Fenway Racing, Chastain had never driven for any well-funded team in the Cup Series.  Nobody really knew what he would be capable of if given a truly competitive car at NASCAR’s highest level.  But Chastain and Ganassi maintained their connection, and when the No. 42 car opened up for this season, the young talent finally got his big break.

However, Chastain and his new team endured a rough start to the season.  Other than a top 10 in the Daytona 500, they’ve struggled to find speed on just about every type of track.  After crashing out of the dirt race at Bristol Motor Speedway, the No. 42 was 26th in points, leaving the Daytona 500 finish as Chastain’s only top 10.

It was not until Sunday’s race that Chastain had another really good run, placing fourth at COTA.  It is a surprising result for him, a driver who has never been known as a road course ace or someone that had a lot of experience racing in the rain.  In fact, Chastain attempted to run the Xfinity race on Saturday to get some extra practice at COTA, only to drop out with a mechanical failure on the first lap.

So, how did Chastain, a driver with a new team which has struggled for most of 2021, come to an unfamiliar track with exceedingly difficult race conditions and produce his best performance of the season?

It seems like a shocking result, but there were several factors that worked in his favor.  In the first place, the No. 42 team has begun to rebound from its slow start.  In the six races leading up to COTA, Chastain placed in the 14th-to-17th-place range in every single event.  Those results won’t set the world on fire, but they at least bought the No. 42 a stretch of races without any crashes, mechanical issues or poor finishes.

Perhaps more significantly, the rainy conditions at COTA turned out to a blessing for Chastain.  Contrary to what you might think, racing on a wet track did not necessarily benefit the most experienced Cup Series racers.  Harvick and Martin Truex Jr. were among several drivers to get wiped out in a pair of hair-raising crashes caused by poor visibility on the track’s high-speed backstretch.  Brad Keselowski, Denny Hamlin and Newman all had moments when they spun off course.

Even Kurt Busch, Chastain’s veteran teammate and a very capable road racer, went skidding off the track and nearly slammed into the wall late in the race.  Busch’s slide likely contributed to NASCAR throwing a caution for hazardous conditions moments later, the caution that wound up ending the race.

But the wet conditions never appeared to bother Chastain.  Slipping and sliding around almost every turn, he raced his way to the lead twice, for a total of four laps, and looked like one of the fastest cars in the second half of the race.  A slow final pit stop dropped him behind several of the front runners, but he was still able to fight his way back to the top five by the time the race concluded.

Chastain’s performance at COTA feels like it could be representative of his career path to the Cup Series.  Nobody really knew what to expect of him on Sunday, yet after fighting through some difficult circumstances and setbacks, he walked away with a good result.  The question now is if this good run follows the old Chastain pattern of hinting at that untapped potential.  With 12 races to go before the playoffs, Chastain finds himself 20th in the standings, 58 points below the cutline. It’s not inconceivable for him to climb into the postseason picture.

Will it happen? While there is certainly still room for improvement from the No. 42 team, Sunday’s race looked like the first time that Chastain could be a true contender in the Cup Series.  Once again, after braving some rough seas, the tide has turned back in his favor.

Actually his Xfinity ride Saturday was repaired but not competitive, and he completed the race in 30th place, just above Boris Said. Sitting in the stands, I watched him complete lap after lap for his owner, earning his paycheck as he always has done. He no doubt had the track memorized by the end of that race. So proud to see him do well in the GP Sunday!