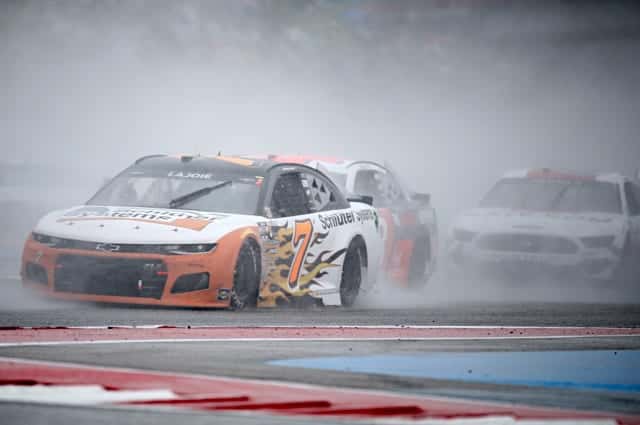 By now, everyone knows how miserably wet the NASCAR Cup Series’ inaugural event at Circuit of the Americas was.

The looming question, though, is why NASCAR allowed Sunday’s (May 23) EchoPark Texas Grand Prix to be marred by such treacherous conditions.

Before we delve into the calamity that took place around the 20-turn course, a few pre-emptive disclaimers.

My excitement for this race was at an all-time high. This was the first entirely new circuit on the NASCAR schedule since Kansas Speedway and Chicagoland Speedway were both introduced in 2001. Visiting a venue such as COTA does more to legitimize NASCAR than it does to legitimize the course, especially considering this facility was built for Formula One.

The start of the race was exceptional. Road-course aces Austin Cindric and AJ Allmendinger put their skills on display from the drop of the green, navigating slick but raceable conditions. There was side-by-side racing, calculated risk, and extreme levels of talent necessary to get through the rain.

That’s where my disclaimers — and excitement — end. For me, any high I had for the event plummeted during stage two, following three crashes and two cautions that should have never happened in the first place.

The first came on lap 19, when Christopher Bell drove into the right-rear corner of the slowing Ford of Ryan Blaney while neither driver could see through the blinding mist. The impact destroyed the front end of Bell’s car, sending him spinning and sliding down the long back straightaway. Rookie Chase Briscoe noted on the NASCAR subreddit, “[Tyler] Reddick and I almost killed Bell” because neither could see the sideways No. 20 Toyota as they raced by.

Simultaneously, Kevin Harvick was slowing on the same straightaway, unbeknownst to the trailing Bubba Wallace. On the fastest part of the track, Harvick slowed to 97 mph before getting hammered from behind by Wallace, briefly lifting the No. 4 car off the ground and ending both his and Wallace’s days early.

That was a wild one. pic.twitter.com/ZUZKBO2HWa

The downpour of rain and subsequent rooster tails — the spray of water spewing from behind and beneath the cars as they drove through pools of water — made for unbearably low visibility, putting drivers at risk on a high-speed circuit.

“I’ll put it this way, the entire field could have been wrecked on the backstretch and I would have hit them wide open and not have seen them until I hit them,” Briscoe commented.

#NASCAR … I talked to @KevinHarvick and he was not happy about racing in the rain, saying “I’ve never felt more unsafe in my whole racing career. Period.” pic.twitter.com/3DdDKwe1No

While NASCAR officials should have displayed the yellow before these incidents occurred, perhaps this missed call can be excused. This is the first true wet weather race the Cup Series has endured, so lessons were being learned in real time.

NASCAR officials should have red-flagged the race, removed that standing water from the backstretch, and carried on once again.

Instead, they cleaned up the carnage, left the heavy water on the track, and watched as another horrible crash marred a sloppy and scary second stage.

This time, it was Martin Truex Jr. who was driving blind up the same straightaway before driving into the back of Michael McDowell, much like his teammate Bell drove into Blaney. Seconds later, Cole Custer sped full speed into the rear of Truex, launching Truex skyward from behind before the No. 19 Toyota slid along its right side and atop Custer’s roof.

After colliding with Truex, Custer then slammed left-front-first into the armco barrier – one thankfully covered with foam padding — before his car erupted in flames. The 2020 Rookie of the Year leaped from the car just as Ricky Stenhouse Jr. neared and swerved to avoid hitting Custer.

This crash was avoidable — not by the drivers, but by NASCAR officials. The melee of the preceding caution should have alerted them something needed to be done immediately. Instead, more drivers were put in harm’s way.

To its credit, NASCAR acknowledged its error after the race when Vice President of Competition Scott Miller met with the press.

“I would kind of own the fact that maybe we did let it go a little bit too long before we did something,” Miller said. “It’s a learning experience for all of us. We will learn. We will be better next time. I think probably your original question is would we the pull the plug earlier? Probably so.”

I don’t envy those officials’ jobs. There were many obstacles to juggle and a lot at once. But conditions as egregiously bad as what we saw Sunday — let’s not forget the officiating tower has access to those same in-car cameras too — should have been sign enough to stop.

Winning car owner Rick Hendrick, whose Hendrick Motorsports team tied Petty Enterprises for the most wins in Cup history with 268 courtesy of Chase Elliott, praised the entire field for handling the track as skillfully as it did and noted it could have been worse.

“I don’t understand how we didn’t have more problems than we did,” Hendrick said. “There were a couple of situations there with the [No.] 19, it was a pretty serious hit. I’m just glad everybody’s OK.”

With as many races as we’ve seen interrupted by rain over the past two seasons, racing in wet conditions seems inevitable. Goodyear brought an impressive tire that handled the conditions surprisingly well, and the drivers maintained their cars extraordinarily well given the circumstances.

The difference comes when limited visibility devolves into none whatsoever.

Certainly, teams and officials will debrief following the chaos that developed at COTA. I hope the track gets another crack on the Cup schedule, one uninterrupted by wet weather.

But if Mother Nature shows up without a ticket again next year, NASCAR officials had better be prepared after what we saw Sunday.

I’m pro racing in the rain, or more precisely, the wet. Miller’s words though – like nearly all NASCAR’s official statements – are pretty much a steaming pile of BS. Aside from basic common sense, they had ample learning opportunity from last year’s Xfinity Roval race conditions to know exactly what to expect from the hard rain at COTA. I realize all the issues that make using local cautions impractical if not impossible for NASCAR at this point, but a couple local caution areas in the high danger stretches might have helped out a bit. Last – I’m the first to bash NASCAR’s management and stupid decisions, but the idea that NASCAR needs to visit an F1 track to gain legitimacy is just silly.

I am not a fair weather fan and NASCAR officials are human. After seeing the hype for the race-they had to let them race. The track is so long that calling a caution and removing standing water would have been a good solution-or just a red flag to let the rain subside for a bit WHILE they cleared the pools. I wanted to see the final 14 laps (even though my guy, Harvick was eliminated in a rain crash). But NASCAR is and has ALWAYS had rain-ended races and this was no different. Now, in 1995, they tried using rain tires, but it didn’t work. The race, even with the crashes, is attributable to the skill of current drivers. Accidents happen in NASCAR and placing blame is for the birds.

Maybe the upside here is the rain covered up what is a bad mismatch of cars to track. COTA is not suitable for NASCAR touring series vehicles. The TV coverage does not capture the speed capabilities of the track. The cars/trucks look lazy. The lap is so long, even losing one lap to a yellow is a huge loss. The worst fan viewing location is at start-finish (I know because I’ve attended other races at COTA). Go back to Watkins Glen for a road course. Stay with shorter distance road course tracks. Go back to Texas Motor Speedway for a Texas track. But please for the love of all things speedy, don’t take NASCAR back to COTA. Them acronymns just don’t fit, even in the dry.

I feel the same way about the track. The cars are too heavy to be braking as hard and as often as they would need to on a dry track. It’s the same as running the long track at Watkins Glen. I was there in 1978 for NASCAR modified and ASA races and the laps were too long and the caution laps took forever. COTA is a track for F1 and Indy cars and IMSA prototypes.

i hear COTA and think of Car Of Tomorrow Atrocity!!!

I still say, here’s a car, here’s a track… now race bitch. The race at Dover and the last couple 1.5s weren’t any better. At least it’s different.

I’d rather see twin engine go-karts like I saw at Mosport “race” at the COTA than the dump-truck equivalent bumper cars of NA$CAR and would put on a better show. The karts were really fast and sounded like a swarm of bees going up the Andretti Straight. Karts also raced at Pinecrest Speedway.

Perhaps some genius in the tower could have suggested a red flag after stage one. I know that the weather wasn’t expected to improve, so why not run at 11:00 am the following day? Better yet, why didn’t NASCAR simply run the race two hours earlier? Oh, and please don’t tell me the lame excuse, “we have to work with our television partners”. NASCAR, it’s your series — simply start the race when you want….

I watched both the NXS and Cup races and enjoyed them both, probably more than I enjoy most ovals. I hope COTA becomes a regular track for both series. However, the POTB DO need to decide on a rain strategy that makes sense. Wet track vs. downpour: it shouldn’t be that hard to tell the difference!

It was a test session: NA$CAR wanted to see where the limit is for rain/standing water on a road course. They found the limit. And they were willing to risk driver safety to do it. Shameful.

But NA$CAR must have felt there was pre$$ure to keep the race going (from Fox, sponsors, COTA, etc.) Very, very fortunate they didn’t kill or injure a driver.

Will the new car on a dry (or even damp) track make for good racing? We’ll see next year.

Bill B
Reply to  Rain rain go away

Oh the new car is going to fix everything.

Stupid is as stupid does

It’s the Brian effect. And Stupid (more than one) keeps on doing. It still appears he’s making the decisions from his bar stool.

The drivers have confirmed that they would rather crash than back off ( post race comments from many, Including the 9 and 7 on Sirius XM) . Therefore, NASCAR must step in and protect the drivers from themselves. As much as I hate the stewards in Indycar, F1, etc, NASCAR must institute a system where “experts” judge driver actions in real time. Stewards, with no loyalty other than a safe fair race, could have called for a red flag on the drivers behalf. In the case at hand, NASCAR@COTA2021, NASCAR was learning. I expect that NASCAR will do better in the future