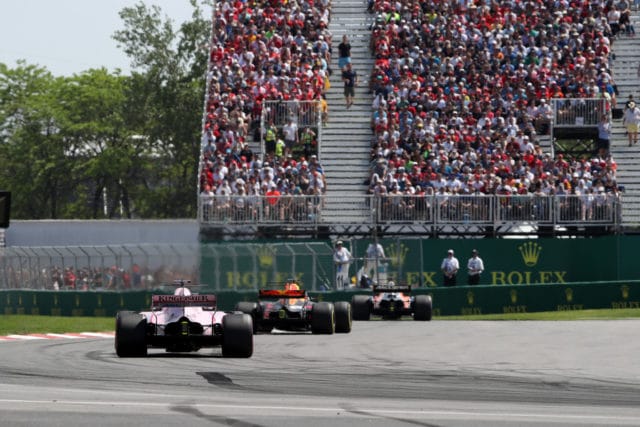 For 16 years, Max Mosley lorded over Formula 1, working in concert with his friend and F1 supremo Bernie Ecclestone. Together, the two ruled the sport, with Mosley holding the position of FIA President and overseeing on-track matters while Ecclestone was in charge of television rights, promotion and expansion.

Mosley died, age 81, on Monday (May 25) after losing his battle with cancer. The sport as a whole offered its condolences, owing much to how the Brit led the sport with a focus on safety.

From a team owner to FIA president, he transformed our sport – and his legacy, particularly in safety, will last for generations

Our thoughts are with his family and friends pic.twitter.com/DPrqazxS9r

Stalwarts of F1 made sure to chime in and offer thoughts.

We are deeply saddened by the news of Max Mosley's passing. He was passionate about motorsport and as President of the @FIA he made an immensely valuable contribution to improving safety in the sport. @ScuderiaFerrari extends its sincere condolences to his family. pic.twitter.com/8MmrnYucWN

From driver to team founder to FIA President, Max Mosley was a powerful modernising force for world motor sport and a unique personality in our industry.

On behalf of Mercedes, we extend our sympathies to his family and friends. pic.twitter.com/PeSqO6hP0I

Mosley’s career with F1 began in the 1960s when he chose not to pursue a career as a barrister and instead became involved in racing. His first foray into the sport came as a clubsman racer, but he wound up racing in F2 in 1969. Admittedly not a talented driver, Mosley used his love of racing to then become a team owner with March Engineering.

The team started off with some decent results but declined through the 1970s, and what had begun in 1969 ended with Mosley selling his share and walking away from ownership. March ended its run in 1977 with 12 podiums and two race wins. While March may have flamed out, one worthy mention is that Adrian Newey, the chief technical advisor for Red Bull, had a stint at the team.

While his team may have faltered, his love of the sport continued, and Mosley used his experience and growing presence in the garage to become head of the Formula One Constructors Association. Two things stand out from his time at FOCA.

First, he became aligned with Ecclestone, as he was one of the founders of the association. The second aspect that held importance was that after Mosley became head of FOCA, he orchestrated the Concorde Agreement between the teams and the governing body, one that basically gives the teams a voice in how the sport is managed.

The Concorde Agreement is a foundational element in F1 and is something that comes under scrutiny when major changes are proposed in the sport. Since 1981, there have been eight Concorde Agreements, with the most recent being signed in 2021.

While Mosley may not have been part of the 2021 CA, this version is an amazing step forward for the sport. Never before had teams agreed to a spending cap, meaning that teams like Ferrari, Mercedes and Red Bull will now work on the same level as the rest of the grid.  For a team like Haas F1, the latest CA is a lifesaver, so much so that the team has halted work on its 2021 car to focus its efforts on 2022, when the CA will take effect.

Mosley understood that the racing product is vital to keep the sport healthy and to have teams work from a similar footing should do well to provide better racing. But Mosley also knew that keeping the drivers safe was key.

The deaths of Ayrton Senna and Roland Ratzenberger at the 1994 San Marino Grand Prix changed his focus. Having ascended to the position of president of the FIA, Mosley’s main emphasis became driver safety.

One story that might offer an idea of Mosley’s mindset comes from the two drivers’ funerals. Mosley did not attend Senna’s but made a point of attending Ratzenberger’s. When asked his reasoning, Mosley stated: “I went to his funeral because everyone went to Senna’s. I thought it was important that somebody went to his.”

Such a move showed his love of the sport, its drivers and the risks they took. He formed an Advisory Expert Group led by neurosurgeon Sid Watkins to focus on safety. Under the direction of the group and Mosley, the sport began implementing crash tests for F1 cars, tire changes to slow cornering speed and the HANS device. Tracks also faced scrutiny in how they were laid out and modifications made to make the racing more safe.

Mosley’s reach extended beyond the track with his push to establish the European New Car Assessment Program (ENCAP) in 1996. The organization assesses the safety worthiness of European cars and has been instrumental in regulating the industry.

His presence in the F1 is one that is hard to fathom, having worked from driver to owner to head of racing but he could also bring problematic attention.

But the claims and the ensuing lawsuits between Mosley and Google – owing to the search engine linking terms with the NOTW photos – lasted for years. His assertions became more troubling the more the cases lasted.

In time, other publications began to assert that Mosley was racist, something that he failed to ever dismiss. Mosley, instead, sought to make his private life one that had nothing to do with the sport and was bullish on keeping the two separate.

Sad news about Max Moseley but I enjoyed the excuse of re-reading my 2015 @ObserverUK interview with him. His extraordinary refusal to be bullied by the News of the World almost as remarkable as his mother's love for Hitler. Also spanking.https://t.co/iR09ol54EI

By 2009, with his scandal surrounding him, he chose not to seek re-election as head of the FIA. The decision came as the best-case scenario for the sport, and Mosley’s hand-picked successor, Jean Todt, took over the role.

His time in F1 lasts five decades, and his fingerprints are everywhere. He was feisty and ruled much as his counterpart Ecclestone did, with casual derision to those who stood in his way. But Mosley steered the sport in meaningful ways, creating peace among the teams and the governing body and bringing safety to the forefront. He was also one of the early advocates for green energy in motorsports, something that resonates with the hybrid-engine era beginning in 2014.

His influence in the sport is one that will last long past people remembering his name.