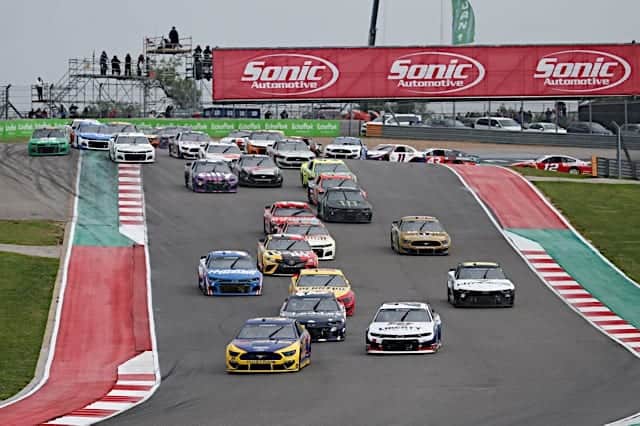 This past weekend, NASCAR’s top three series were the subject of a bizarre but memorable inaugural weekend at the 3.4-mile-long Circuit of the Americas in Austin, Texas.

COTA has become the latest example of NASCAR’s newfound “road course craze,” which constitutes a plethora of new road courses added to NASCAR’s schedule in recent years. The inaugural NASCAR Cup Series date at Road America is still yet to come in July, Indianapolis Motor Speedway will have both the NASCAR Xfinity and Cup series tackle its road course layout in August and the Charlotte Motor Speedway ROVAL will host a playoff weekend in October. Seven road races dot the schedule in total, the others being the staples of Watkins Glen International and Sonoma Raceway, plus Daytona International Speedway’s road course layout, which made its Cup debut last year.

Clearly, there are other well-known road course circuits around the country that provide fun on-track action for other racing series. In the distant possibility that NASCAR gets involved with racing there, these five winding tracks could quickly become surprise favorites among stock car racing fans.

When it comes to finding a road course that’s both challenging for drivers and versatile to fans, Road Atlanta is a diamond in the rough.

This Braselton, Ga., facility features 2.5 miles of long, fast straightaways, numerous elevation changes and 12 tricky turns. It served as the host of two Xfinity races from 1986-87, won by Darrell Waltrip and Morgan Shepherd, respectively. Former ARCA Menards Series East standout Dylan Kwasniewski won the sole race for that series there in 2013 en route to the championship.

Since those two Xfinity races in the late 1980s, the track has been a mainstay of IMSA sports car competition, featuring the ever-prestigious Petit Le Mans event, which first ran in 1999. Several of the best names in sports car racing have tasted victory in the 1,000-mile-long event, such as Scott Pruett, Jordan and Ricky Taylor, Scott Sharp, Allan McNish, Max Angelelli and JJ Lehto.

With an ample amount of solid concrete walls being so close to the circuit, there is little room for error (just ask Brad Keselowski about his 2011 testing crash there). Making another NASCAR race happen there would be a challenge. But if NASCAR ever chooses to spend an extra week in Georgia, Road Atlanta could be a place that can give both drivers and fans their fill.

We all know how popular and exciting Talladega Superspeedway is for race fans. But travel roughly 40 minutes west on Interstate 20 and another fun racing facility will appear in your windshield, one NASCAR should consider using for a potential multi-week Alabama swing.

The 2.3-mile Barber Motorsports Park lies just on the outskirts of Birmingham and has been a hotspot for the NTT IndyCar Series for over a decade, including this year’s season opener won by Alex Palou. IMSA’s WeatherTech Sports Car Championship also had the road course on its schedule from 2003-13.

Barber can either serve as a calm precursor to Talladega or a soothing reliever after the superspeedway chaos. Driving through the relaxing, green scenery and smooth, easy-going layout would do just that. … That is, if they can make it to the end of the first lap without incident.

Nestled within the lush, green hills of Connecticut sits Lime Rock Park, which is another road course that NASCAR is no stranger to.

Lime Rock opened in 1957 and is one of the oldest operating road courses in the country. The circuit is a relatively quick one to turn a lap at, barely skimming over 1.5-miles in length with just seven turns. It is owned by the legendary Skip Barber, whose driving school provides a way for future drivers to get a foot in professional racing’s door.

Sports car racing may be the track’s forte, but NASCAR vehicles have been on Lime Rock’s pavement in the past. Dale Quarterly and Todd Szegedy won the two Whelen Modified Tour events held there in 2010 and 2011. And ARCA East had a 17-year stretch there from 1993-2010, featuring race winners such as Ken Schrader, Ted Christopher, Mike Stefanik, Ryan Truex and Andrew Ranger, while a young Matt DiBenedetto notched one as well.

If NASCAR considers scheduling a race weekend at Lime Rock, it will provide New Englanders Joey Logano, Ryan Preece, Kaz Grala, Austin Theriault and all of the area’s race fans a second race weekend that’ll be closer to home.

Road course racing and California is a historic combination. Riverside Raceway hosted Cup events from 1958 all the way up to the track’s closure in 1988. Sonoma took over that role in 1989 and hasn’t stopped hosting Cup races since then (with the exception of last year). But one other venue that would make a fabulous addition to the West Coast Swing would be WeatherTech Raceway Laguna Seca.

The scenic atmosphere, pleasant weather and unique track features make this 2.2-mile circuit a popular choice for several racing series on a global level. IndyCar and Indy Lights have raced there since the early 1980s, and the WeatherTech Sports Car Championship makes annual visits to WeatherTech’s self-sponsored track.

For opposite reasons, it’s a memorable place specifically for the Herta family. Bryan Herta was the victim of Alex Zanardi’s bold last-lap pass in the corkscrew en route to Zanardi’s 1996 season finale win. And his son, Colton, was triumphant in the 2019 IndyCar season finale for his second career win.

Should NASCAR race at Laguna Seca, the racing experience for both drivers and fans would be like no other, especially when the field navigates through the track’s rolling hills and corkscrew, and having a second taste of sweet California wine wouldn’t be half bad either.

Once upon a time, Portland International Raceway did have NASCAR vehicles take to its surface. Thanks to IndyCar, it’s back in the spotlight, but it leaves some fans to wonder what it would be like if NASCAR ever made its way back to the Oregon facility.

The track hosted two Camping World Truck Series races from 1999-2000, with Greg Biffle and Andy Houston picking up those two race wins. The Trucks haven’t returned since then, but the track maintained its life by hosting races for IndyCar, Indy Lights, the American Le Mans Series and the ARCA Menards Series West.

Portland’s most unique feature is that the entirety of its 1.9-mile length is completely flat with no elevation changes or banking. And let’s not forget the dreaded chicane at the end of the frontstretch that tends to cause major problems.

It may be a hike for most of the race teams located in the Charlotte area. But a return to the Pacific Northwest, even for just one race, will be a can’t-miss event for people who reside in that part of the country. It was a smash hit for IndyCar. NASCAR is fully capable of doing the same.

If we add another 5 road courses we might as well rename NASCAR into TRANSAM. I was watching Camaros and Mustangs (no Camrys) run road courses back in the late 60’s. NASCAR was about ovals.