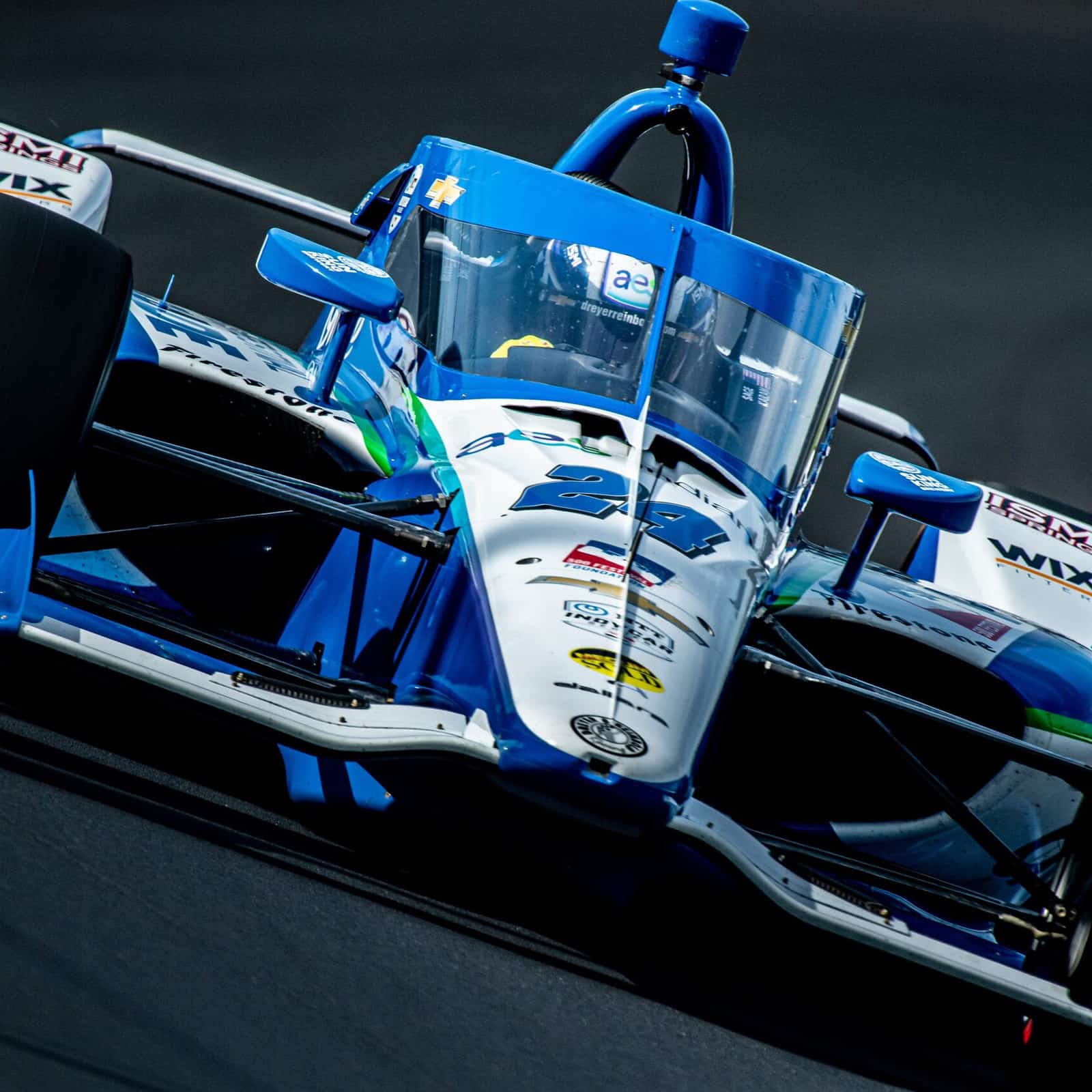 While driving over 230 mph on the back straight at the Indianapolis Motor Speedway, Sage Karam was feverishly lowering the ride height of his car by about an eighth of an inch to try and help him qualify for the Indianapolis 500.

“We saw on data that it helped accelerate the car out of the corners when I started lowering it compared to laps in practice when I didn’t do it,” Karam said the day after he qualified 31st out of 33 cars. “I don’t know if we would’ve done a 230-mph lap if I wasn’t doing that, so who knows, it’s one of those things we felt we needed to do to give us the best shot at optimizing the lap.”

Karam drives the No. 24 Dreyer and Reinbold Racing Chevrolet in the NTT IndyCar Series. The team is a smaller Indianapolis 500-only team, limited by their budget but not in their attention to detail. Over the course of the offseason following last year’s Indy 500, the Dreyer and Reinbold crew were working on a superspeedway weight jacker tool to quickly adjust the ride height on the car but weren’t able to perfect it.

By pushing a button on the steering wheel, a driver can adjust the weight jacker down many notches to lower the right rear corner of the car using a master cylinder in the chassis and a slave cylinder on the right rear shock of the car, as Karam’s race engineer Jeff Britton described.

“A lot of teams have found a loophole that the amount when you jack the right rear shock platform up and down it also changes the ride height,” Britton said. “So the underwings the way they are now, you can get them to a point where the underwing starts to stall if you get it low enough and it sheds a bunch of drag.

“Last year was the first time we noticed it that people are running super fast weight jackers. You’re allowed to have that slave cylinder on the right rear move a total distance of a half an inch from totally closed to all the way bumped up and they were getting those cylinders to move from one extent to the other in two seconds or less.”

Every time Karam went off of turns 2 and 4 on all four of his qualifying laps, Karam had to push the weight jacker button several times on the car to lower the ride height about an eighth of an inch because that’s all the team was able to get the shock to move in a short amount of time. However, in order to remain flat out on the qualifying lap, Karam had to manually adjust the car back to where it was for the corners. With those adjustments taking seconds to finish, Karam had to set his car back up while on the straightaway.

During the first day of qualifying, Karam had to adjust a fuel mixture on one of his qualifying runs so the engine wouldn’t get too hot. However, the 2013 Indy Lights champion wasn’t able to get the weight jacker adjusted properly going into turn 3.

“I went into turn 3 and I wasn’t even close to getting the weight jacker back,” Karam said. “So I had to really get out of it in turn 3 and I did like a 228.8 and then that was the end of that run because I wasn’t going to go faster, but that was like one little slip-up and the run is done.

“You have to get it back to a range of the rear being at a certain height for the corner to be able to make the corner. If it’s not back then the car would have a lot of understeer and wouldn’t really steer.”

Over the course of a four-lap qualifying run, the tires are subjected to so much stress that their grip falls off incrementally, forcing a driver to adjust their weight jacker more and more over the course of a run in addition to other handling adjustments.

“I think for the first two laps I ran like -2 on the weight jacker through the corners,” Karam said. “And on the third lap I think I was at -4 and then the fourth lap I was at -6, and I was still going to +10 down all the straightaways. It moves in increments of two per click, so that’s over 20 times per lap I would be hitting weight jacker buttons and then on top of that you’re shifting gears and doing fuel mixtures and I did a front bar adjustment probably twice over the four laps so it was a lot going on.”

A car at the Indianapolis 500 has to minimize all areas of drag in order to maximize speed. For many teams, that includes working on specialized bearings, gearboxes and perhaps most importantly, bodywork. Teams will spend many hours making sure that the body panels on their cars fit together as smooth as possible.

“All the cracks in the bodywork are the absolute minimum,” Britton said. “I mean, everything has to be split apart, but the seams on our car are super tight and super smooth. If you look at our car, we have no decals on our car. Even all the blends stripes from AES are all hand painted, paint mask done and cleared over so the whole car is smooth. There’s absolutely no lips of decals anywhere on the car.”

Dreyer and Reinbold Racing also have an upright dyno at their shops where they run the uprights up to 200 mph on those dynos trying to find where friction is coming from. The more friction you can reduce, the faster a driver can go. However, the team has to depend on outside sources for some data. There is no in-house shock program and the team has to rely on Chevrolet or on Pratt and Miller (Corvette Racing’s factory team) for aerodynamic data.

Sage is one of the fastest drivers in Indy Car. But you can also count on him not to finish a race for whatever reason.

As a non-race fan, I found this fascinating. Thanks for the story!