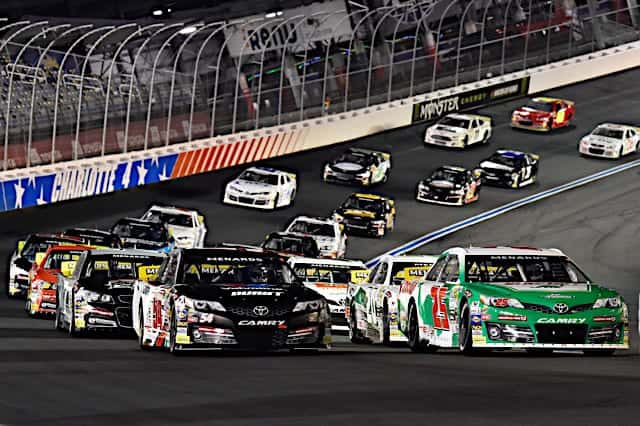 After racing at its home track, Toledo Speedway, the ARCA Menards Series heads to the home of NASCAR, Charlotte Motor Speedway. While only 14 drivers competed at Toledo, 24 drivers are vying for victory in the General Tire 150 at Charlotte.

Charlotte was set to host ARCA last year, but due to the COVID-19 pandemic, the race was realigned to Kentucky Speedway. Ty Gibbs won that race, but the General Tire 150 features no past Charlotte winners.

Gibbs and Corey Heim are the only two winners in ARCA this season. Neither has competed at Charlotte before. Will it be the Gibbs vs. Heim show again this weekend?

While he does not lead the point standings, Gibbs has amassed the most trophies this year. He’s won three main ARCA races, the ARCA Menards Series West season opener and the most recent ARCA Menards Series East race. Gibbs also won his NASCAR Xfinity Series debut at the Daytona International Speedway Road Course. Rightly so, he is the driver to beat.

Further bolstering his odds, Gibbs posted the fastest speed in an ARCA open test at Charlotte on May 11. So, can anyone defeat him?

“Go faster,” Venturini Motorsports team owner Billy Venturini told Frontstretch about what his organization needs to beat Gibbs. In addition to Heim, Venturini will field Drew Dollar in the No. 15 Toyota and Parker Chase in the No. 25 Toyota.

Heim posted the fifth-fastest time in that test, so he will need to go faster in his quest for his fourth ARCA win. Although he leads the points, it is a matter of winning races, according to Venturini.

“Too early to be worried on points,” Venturini said. “We just go out, perform the best we can, and try to win races.”

Third-fastest in the test session, Dollar has never competed at Charlotte either, so he will gain an education in the truck race.

“He’ll just get to see the line and see which way it migrates throughout the race so that definitely is a little helpful which will benefit him,” Venturini said.

Chase is making his first ARCA oval start with Venturini. He competed last year in the ARCA race at the Daytona road course, finishing 10th. Venturini has high expectations.

“I’d like for him to be able to run all the race,” Venturini said. “No damage on the car, get a nice top-six, top-seven finish would be a great day. Run all the laps, stay on the lead lap, car in one piece. I think that’d be a lot to build on going forward.”

This ARCA race will be the first of four main ARCA races for Chase. He logged the most laps in that test session (52), so he has studied adequately for his first oval race.

Gibbs and the Venturini trio all drive Toyotas. Who are the top drivers of the other manufacturers?

Third in the points is Thad Moffitt. He is one top five away from tying his career-high of three.

“I am really looking forward to hitting the track at Charlotte on Saturday,” Moffitt said in a team release. “Our mile-and-a-half program has a lot of speed and we are continuing to get better every week as a team. I felt pretty confident after the ARCA test a few weeks ago, so hopefully the testing translates into the race and we give CleanPacs and Aqua ChemPacs another great run.”

Wood made his Truck Series debut in its inaugural race at Circuit of the Americas, where he qualified 33rd and finished on the lead lap in 28th place. He will again pilot GMS Racing’s No. 24 Chevrolet in the truck race before climbing into the No. 21 Chevrolet in this ARCA race. He too will benefit from running double-duty.

“We tested at Charlotte earlier this month and we found some speed in our Chevy,” Wood said in a GMS Racing release. “I think it will be a difficult race because Charlotte is a lot more challenging compared to Kansas but running the truck race Friday night will definitely help me be prepared for Saturday’s ARCA race.”

Lastly, keep an eye on Nick Sanchez. The rookie tied his career-best finish of third place at Toledo and has three straight top 10s after beginning this season with two DNFs.

“A lot of momentum going into Charlotte,” Sanchez told the ARCA website after the Toledo race. “I’m really confident in my team and the car we’re bringing (to Charlotte). I’m hoping to finish two spots ahead.”

This race will consist of 100 laps, with a scheduled competition caution around lap 50.

The General Tire 150 will take place this Saturday, May 29 at 7 p.m. ET with TV coverage provided by FOX Sports 1.