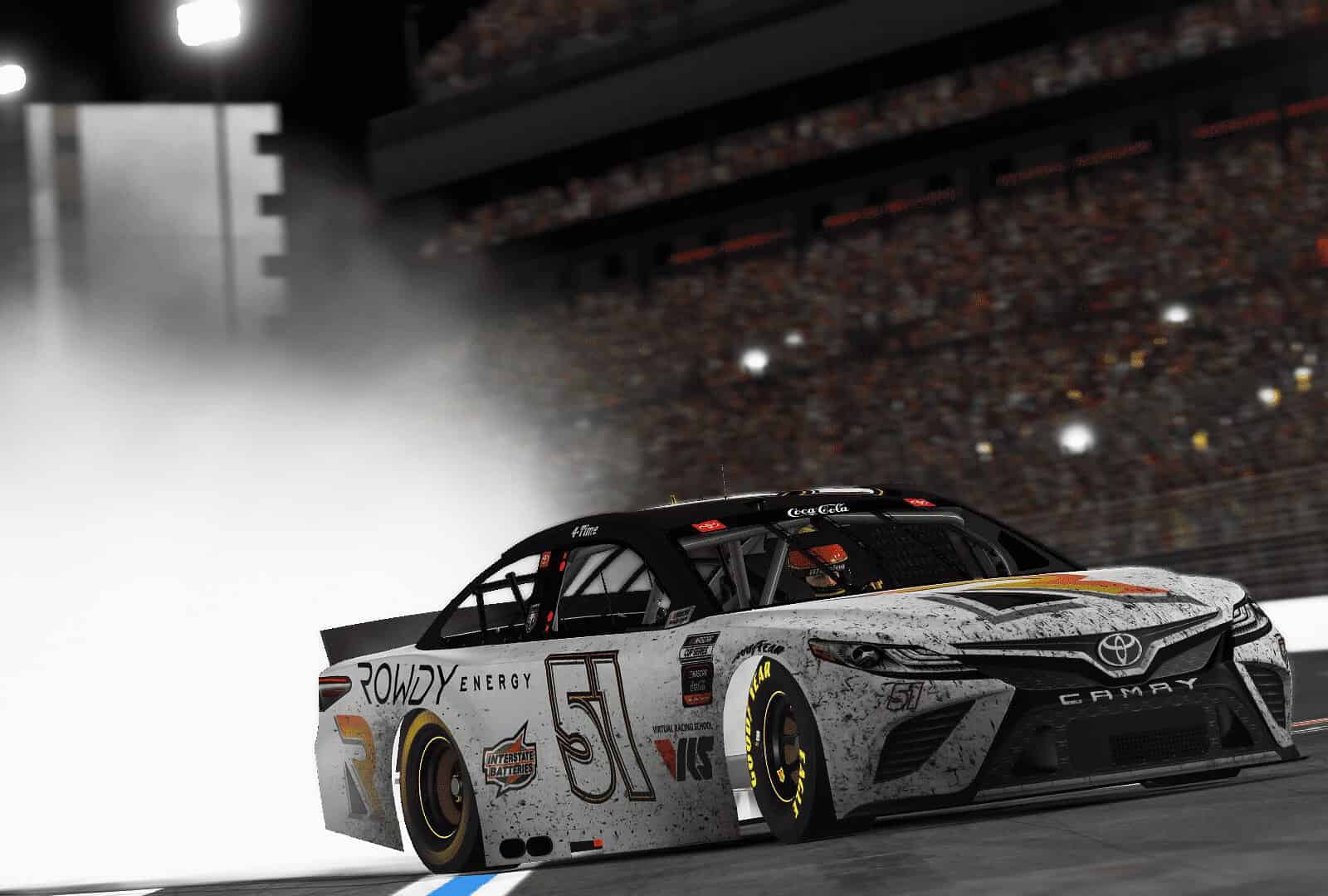 Ray Alfalla took home the win on the longest night of the eNASCAR Coca-Cola iRacing Series season in the Coca-Cola 300 at Charlotte Motor Speedway on Tuesday night (May 25).

Alfalla, a four-time champion of the series and now a 26-time winner, has had a miserable season, but tonight he showed the championship mettle that defined those title-winning efforts.

“How about that?,” Alfalla exclaimed after the win. “Rowdy Energy in victory lane for the first time! I pushed the panic button before the race, and it really was panic — we made all the right adjustments, caught a good break and had a good piece and a good car.”

“We’re just getting started!” he added. This is coming from the driver with the most experience in the field and the most successful one as well.

Keegan Leahy started from pole with 23XI Racing teammate with last week’s winner Mitchell DeJong alongside him. Both started out strong, hoping that success would continue throughout the entire event.

Action began early on lap 1 with an incident involving Derek Justis, John Gorlinsky and Taylor Hurst. Races have been fairly clean this season, so an early yellow was a surprise to many.

Leahy dominated the opening part of the race over Steven Wilson, DeJong and Vicente Salas.

Multiple grooves were being utilized early on, with passing opportunities presented over the long runs. The racing around midpack was especially close for this reason, and we saw many comers and goers.

Pit stops began for the leaders around lap 53, as a long green flag run seemed to be imminent for the remaining of the race. Leahy pitted as Wilson, Salas, and others extended their run past lap 60 to prolong their fuel window for the end of the race.

Problems occurred on Wilson’s stop on lap 67 as the speeding police caught him entering the pits. He had to dig out of a huge hole the rest of the evening, despite having one of the fastest cars in the field.

The cycle didn’t not end until around lap 78 when Leahy regained the advantage over Zack Novak, who followed Leahy’s strategy by pitting early on. Novak and Richmond Raceway eSports teammate Jimmy Mullis both catapulted themselves into the top three after it all cycled around after running near mid pack beforehand.

Leahy continued his dominance most the night, leading the most laps. However, a caution on lap 106 shuffled everything up. Many drivers were caught off strategy during this caution period, including Leahy. Drivers who were running up front like Mullis were caught one lap down and forced to wave around.

Leahy and Casey Kirwan lined up on the front row for the restart with 91 laps to go. Kirwan took over the race lead on fresher tires and looked to take control of the race, which he was successful at…at least until Leahy took the race back over with 63 to go.

The biggest incident of the race took place with 72 to go, when Garrett Manes got turned around and collected several other drivers, creating a mess in turn 4. Jake Nichols, Allen Boes and Blake Reynolds all sustained damage from the wreck as well.

A big four-car incident involving Ashton Crowder, DeJong, Mullis and Blade Whitt with 37 to go made for an interesting ending. Everyone came down pit road with Leahy winning the battle off.

The race took a turn towards calamity corner after that and three drivers were set up to battle for the win: Luza, Malik Ray and Alfalla. Alfalla prevailed and took home the victory.

Ray, Luza, Leahy, and Novak rounded out the top five.

The next race will be on June 22 at the Pocono Raceway. Coverage begins at 9 p.m. ET on Twitch.tv/iRacing or eNASCAR.com.