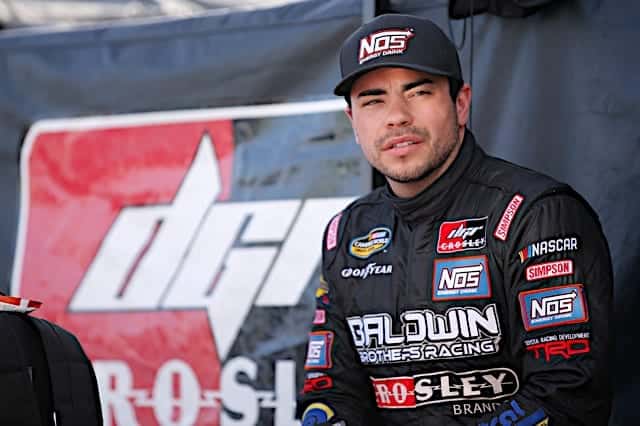 NASCAR’s dirt giants were uncharacteristically quiet, and Terre Haute lived up to its name as the “Action Track.”

18-year-old Zeb Wise scored arguably the biggest win of his career Sunday night at Kokomo, scoring $26,000 with a triumph in a caution-plagued finale to the ASCoC’s Indiana residency. Wise, who was engaged in a furious battle with Kerry Madsen, took the lead for good after Madsen flipped while leading on lap 34, left with nowhere to go after the lapped car of Cap Henry spun in turn 2.

Soo, close to a big win last night @RayceRudeenFdn @ASCoC leading and had contact with some lap traffic causing a DNF, part of the game. Disappointed but man I’m having a great time driving @TonyStewart_Rcg 14 car. ??

Up front proved to be a treacherous location for the race leaders Sunday, as Brady Bacon led the opening 18 laps before retiring under a lap 19 red flag with a terminal issue. Said Wise on how he scored his victory, “hammer the s*** out of it and don’t mess up.”

The theme of Tuesday night’s program outside St. Louis was “beat the rain,” and Bobby Pierce got the message. The pole-sitter went flag-to-flag in the 40-lap feature, not allowing even the mighty duo of Jonathan Davenport and Larson to get anywhere close to challenging for the $10,000 win.

The win marked the 10th consecutive season for Pierce to post a late model victory at Tri-City. Larson recovered to finish third after slapping the turn 3 wall during qualifying. NASCAR fans got their flavor in both features that ran Tuesday night, with long-time veteran Kenny Wallace finishing eighth in the UMP modified A-main.

Wednesday’s USAC sprint car feature was a barnburner, and a tale of two races. Chris Windom scored the $5,000 victory in dominating fashion, running away from the field on a green-white-checkered after knocking Justin Grant out of the race lead in turn 4 with four laps to go. Grant had started from the pole and led the opening 26 laps of the 30-lap feature.

Arguably the story of the night, however, was one Brady Bacon. The USAC national sprint car points leader entering Terre Haute, Bacon topped the charts in both hot laps and qualifying before disaster struck on lap 1 of the first heat race:

"Macho Man" @BradyBacon goes for an unbelievable ride, flying out of the park at @TheActionTrack, Brady is OK! @USACNation pic.twitter.com/lDbDuGsWZM

Bacon proceeded to start dead last in the Semi, raced from 14th to third to make the feature, and then put himself on the podium with a third-place finish in the A-main. Wallace made the trek to Terre Haute and finished fifth in the UMP modified feature.

Pierce turning a $10,000-to-win super late feature into a snoozefest is both an accomplishment and bad news for the competition; while Pierce has scored major wins in 2021 in the long-distance Illini and Hawkeye 100 events, seeing him break through in a traditional distance feature could well open floodgates.

Rico Abreu hasn’t done a lot in 2021 since winning his preliminary night at the Chili Bowl in January, but finishing second, second and third to close out the ASCoC tour through Indiana was a return to form for the veteran.

Lastly, the feel-good story of the midweek stretch came courtesy of the 4-cylinder class at New Egypt Speedway in New Jersey. In what may have been the race of the midweek, Justin Dunn had his five-race winning streak in the class snapped by none other than his father, Scott Dunn, in a thrilling side-by-side battle.

The elder Dunn, who won the event in a car missing first and second gear, was nearly overtaken by his son with three laps to go, but executed perfect “rubbing, not wrecking” contact off turn 2 that slowed Justin just enough for Scott to maintain the race lead. Said father Dunn after getting a hug from his son, “he wasn’t getting six.”

Kerry Madsen knows exactly how Sheldon Haudenschild felt over the weekend at Attica, losing a surefire shot at victory thanks to a lapped car having trouble.

Noah Gass flipped in turn 1 while in a transfer spot with only two laps to go in his last chance qualifier Sunday at Kokomo.

Speaking of flips at Kokomo, he may be leading the weekly points at that track, but Cole Bodine’s only trophy from Sunday came for the most spectacular wreck of the evening. If you’re counting flips by literal times a car flipped, Bodine equaled the “flip count” of the rest of the field on Sunday.

Two drivers opted to live up to the reputation of New Jersey drivers Tuesday night at New Egypt in two entirely different ways. Paul Mancini wins the award for most blatant takeout of the weekend, bowling over Sean Weiss in the closing laps of the 602 sportsman feature for no apparent reason (granted, replay always catches the driver that retaliates). Meanwhile, Matt Miller caused the oddest caution of the weekend, bringing out the yellow flag for cutting across a live track from the infield scales to the pits. Been there, seen that on the Turnpike.

Yes, the weather concerns in Illinois were real on Tuesday night, and I can understand a promoter that puts up $10,000 for a midweek race wanting to get the A-main in. But choosing to start 27 late models in the feature race to kill the B-main does serious damage to the racing program. Major events that start every car that shows up to race are essentially neutered by heat racing that’s academic. Last-chance qualifying races are by definition as suspenseful an event as they come, and should never be axed. Given that 24 modifieds showed up for a 24-car feature race, Tri-City would have been better off axing the modified heat races instead. We all knew Hoffman was going to win anyway.

It may not be as rare as the 17-year cicadas, but watching Stewart Friesen have to race into Tuesday’s Short Track Super Series feature through a consi and then finish fifth without ever challenging for the race lead in the feature was a notable occurrence this midweek.

The “trophy girls” donned in Flo Racing tank tops (and that never touched the trophy that Pierce won Tuesday night) looked about as awkward as they possibly could in trying to take part in a post-race interview they had no reason to be a part of. Note to Flo, take the time and effort to don bored looking blondes in sleeveless ads and make sure the audio to broadcast the damn race actually works.

Anyone that’s read my work over the years knows I’m a sucker for any black-themed paint scheme. I’m still going to give Cade Thomas’s Chick-fil-A scheme a shout out. My pleasure to see that sprint car on track.

And, as much as I criticize sprint car racing for its insistence on using push trucks like it’s the 1970s, I will concede that the in-push-truck camera that did several full laps of the Kokomo Speedway on Sunday prior to the race starting gave a badass perspective to those of us watching.

Where it Rated (on a scale of one to six cans with one a stinker and a six-pack an instant classic): We’ll give this midweek a cold five Zombie Dusts from 3 Floyds Brewing. Tuesday’s late model program was a dud, but the sprint cars on Sunday and Wednesday are giving dirt race fans a stern reminder why Indiana is their turf.

Up Next: The Lucas Oil Late Model Dirt Series hits its namesake track for the $30,000-to-win Show-Me 100 on Saturday night. Coverage is available on MAVTV Plus.