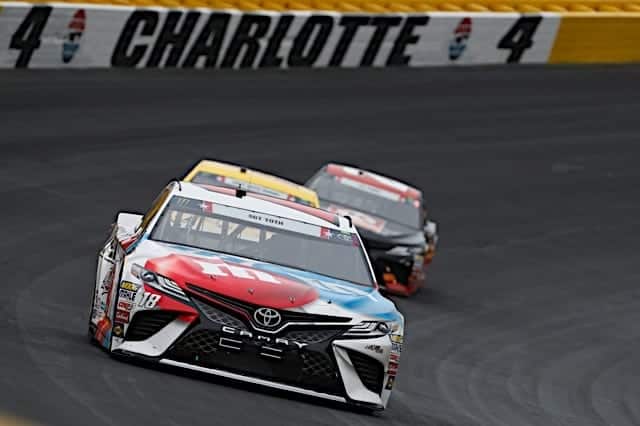 NASCAR has shown a willingness of late to set tradition aside in favor of trying something new. Should it consider running the sport’s lone 600-mile race at a different track than Charlotte Motor Speedway?

Josh Roller: I can’t say this strongly enough: no. The Coca-Cola 600 at Charlotte is one of the crown jewel races in NASCAR, and you don’t touch that. Moving the lone 600-mile race to another venue would be equivalent to racing at Auto Club Speedway on Labor Day weekend. It just doesn’t fit. NASCAR already messed with one of its crown jewels races on the 2021 schedule; there is zero need to tinker with another. There are certain things you just don’t change, and back in 2015, one of those changes was rectified when Darlington Raceway and the Southern 500 returned to Labor Day weekend.

Brad Harrison: At some point, tradition has to have its untouchable elements. The event formerly known as the World 600 is one of them. NASCAR learned a hard lesson when it came to firmly held traditions when it moved the Southern 500 weekend to Auto Club, and it cannot afford to do likewise again. Changing the format? Fine. But the 600-mile Memorial Day weekend tradition of racing at Charlotte should remain just that. Moving the 400-mile race from Daytona International Speedway in July was one thing, but that’s not something you think of when you bring up NASCAR racing — you do have that, though, with the Coke 600, Daytona 500 and Southern 500.

Luken Glover: In NASCAR, tradition does not need to be touched in many ways. The Coca-Cola 600 may not have the same luster as it did in the ’70s and ’80s when engine failures were prevalent, but it still holds high prestige for many fans. First off, the display of support for our troops from the pre-race ceremonies to the paint schemes is one of the best in all of sports. Secondly, this is a crown jewel race and very tough to win. It is a race of attrition, and you must maintain mental toughness, hydration and composure throughout the race. And finally, this a battle of man vs. machine. While drivers aren’t as prone to engine failures, there has still been an array of mechanical failures in recent years.

Tyler Reddick finished eighth in Jordan Anderson’s NASCAR Xfinity Series ride after the car had been excluded from qualifying for all other races this year. Should Anderson step aside the rest of the season at this point, using substitute drivers to build for the future?

Harrison: Jordan Anderson has one of the toughest predicaments possibly on his hands: to chase success as a driver or to take a personal step back and do so as an owner. Many a driver have done the same, such as Rick Hendrick, Richard Childress and, on a smaller scale, Jimmy Means. It’s all about what Anderson’s want-to is. If he’s intent on driving, he should stay in the car. If he is intent on the team’s long-term fate, seeking others may be the better option.

Roller: I love Anderson’s personality plus his desire to race and to be a part of NASCAR. But yes, his team is undoubtedly in a hole, and putting drivers like Tyler Reddick or Josh Berry can help build the team for 2022. Anderson clearly isn’t building a half-bad car if Reddick performed that well behind the wheel in the team’s first race. At the very least, Anderson should hire drivers to build up a comfortable owner’s points position before he gets behind the wheel. In fact, why not just put Berry behind the wheel full time for the remainder of the season once Sam Mayer steps into JR Motorsports’ No. 8?

Glover: This is a tough decision for Anderson. He has proven he can overachieve in his Camping World Truck Series equipment. Now in his first Xfinity race, Reddick earned him a top 10. If Anderson wants an Alan Kulwicki type of career, I completely respect it. However, I would also respect him in a complete ownership role. He just announced that Berry will drive the car at Mid-Ohio Sports Course, which could be the break Berry needs for his future.

Roller: You come across the same issue comparing Petty Enterprises and Hendrick Motorsports as you would comparing Richard Petty to Jimmie Johnson: two different eras. The bulk of Petty’s victories came prior to 1980. Hendrick didn’t arrive at the racetrack until 1984. With that said, however, when the Pettys did most of their winning back in the 1950s, ’60s and ’70s, they typically were one of the three or four best cars at the track. Hendrick has competed in an era where more cars, drivers and teams have had a legitimate shot to win races. Which team’s accomplishments were more impressive? I have to give the edge to Hendrick, but Petty is still very, very impressive.

Glover: This is almost like a greatest-of-all-time debate. It really depends on what era you look at or experienced. Older fans will definitely have an argument for Petty. Richard Petty singlehandedly won 196 of the 268 races. If you are a younger fan, Hendrick is the likely option. Hendrick has won with a long list of Hall of Fame drivers and future Hall of Famers. In the end, I have to go with Hendrick. The competition has certainly gotten tougher in this day and age. That’s not to take away from some of the best drivers ever that Petty faced, but Hendrick has faced many changes in the sport and remains a powerhouse.

Harrison: This is like picking a favorite child. The fact is this: due in large part to the phenomenal racecars that Petty churned out, it was a two- or three-car race most times the No. 43 showed up in its prime. Today, there are about 12-15 cars on the track each weekend with a chance to win. As great as Petty was, it was much easier to win by large margins in that era. Today, the parity makes it all the more tougher, which is why any win in NASCAR is worth savoring.

Eddie D’Hondt’s arrest has cast a shadow over Hendrick this week. If Chase Elliott’s team knew about this accusation before it was reported, what should the NASCAR penalty be if D’Hondt is found guilty?

Harrison: It’d be unconscionable to a driver to be punished for a team member’s off-track actions, even if the team did not report it. In the end, this falls on the team owner, which is why the fine should be on their inactions to the tune of a monetary fine and docking of owner’s points.

Glover: It is a very unfortunate situation that will certainly reflect on Hendrick, whether it was aware or not. It doesn’t jump out that it knew. D’Hondt also was a spotter for JR Motorsports and Hattori Racing Enterprises, and neither have come out with any previous information. They could have very well known, but it’s just as likely that D’Hondt tried to hide it as well. This incident happened around Labor Day, and a warrant wasn’t issued until a couple of weeks ago. Ultimately, the penalty falls on D’Hondt. If Hendrick did have previous knowledge, then team owner Rick Hendrick has some explaining to do. This could lead to a hefty fine and possible points deduction for the No. 9 team.

In all business, including HR investigations, until the facts are known the investigation continues. Certainly I do not condone the actions of Eddie D’Hondt, however, remotely thinking that Hendrick should be fined or something because he allowed the proper authorities to handle it, is ludicrous. The incident had NOTHING to do with the race teams or Hendrick. D’Hondt will have his day in court.
Moving the Coca-Cola 600 would be like the Dallas Cowboys being forced to play as the Oregon Cowboys (or something like that). No. The race still features attrition and in fact, NASCAR should allow it play out AS IT WOULD and do away with stage breaks which would increase the “toughness” factor the drivers would have to face. Now, I don’t mind a competition caution at the start of a race but 3 in each race and 4 in the 600 (plus, most likely, the REAL competition caution at lap 25 or so)? It is time for NASCAR to continue moving back to it’s roots and stop the stage racing. I want to see strategy play out that isn’t influenced by the sanctioning body. I want to see parts fail (no one getting hurt) and the DVP stopped. But, if they aren’t someday, I will still watch. Heck, they did away with that tandem drafting crap and it was a success.

“Certainly I do not condone the actions of Eddie D’Hondt”… sure hope for his sake you are not selected for the jury.

They tried moving the southern 500 a few years ago. How did that work out?

Given a further reading of the court documents so graciously leaked by Bob Pockrass, it seems this is a flimsy case at best against D’Hondt for a minor altercation in a store. He probably assumed or hoped the whole matter would go away. So far, the only rule-breaking seems to be D’Hondt’s failure to report the arrest warrant served on him 2 weeks ago. That is worthy of suspension, but not necessarily any further punishment. I sincerely hope he is back on the pit box this summer after the matter is resolved. Mr. Hendrick himself was CONVICTED of a FELONY in federal court and look where he is!

As a side note, I would also say that it is smart for Chase Elliott himself to stay away from Charlotte for his own off-track activities. There are too many snooping eyes in the Charlotte area. That is ARGUABLY the worst place for a NASCAR driver to live. Just ask Kyle Busch about his arrest and conviction for a joy-riding adventure a few years ago.

JD in NC
Reply to  Jo

Yeah, but Kyle Busch was ticketed in a residential area for going 128 mph in a 45 mph zone. That’s going to get attention no matter where it happens.

The more that comes out about Eddie’s case, the more people need to be willing to let him have his day in court. Remember Patricia Driscoll. This now appears to be a dispute at a business with an owner that has a less than stellar customer service reputation. The allegations reported by Bob Pockrass do not sound anything as bad as the initial charges sounded. Short of a video coming out that shows him actually taking a closed fist swing at her (Ray Rice style), I think Eddie will be back on the 9 car at some point. If this was something more serious, I would think a felony charge would have been issued.

Has the person who suggested the question of maybe moving the 600, had an IQ test?
That is so i don’t know what, dumb, that it deserves only ridicule of the person who devised it.

Was this woman even pregnant on Labor Day weekend 2020? If so she should be having the baby this month. A nine month pregnant woman would make good timing and a good pic for this arrest case. What is the time line on this alleged pregnancy?
A lot of simple Q & A’s are not in this report.