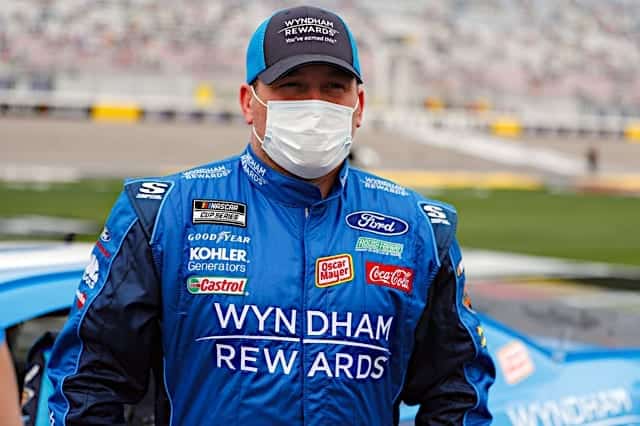 Ryan Newman wants to keep racing beyond 2021. The problem he faces is it may not be his decision.

Amid reports that Brad Keselowski will head to Roush Fenway Racing to become driver of the No. 6 Ford and part-owner of Roush-Fenway-Keselowski Racing, the future of Newman’s career sits unstable.

While nothing has officially been announced, the growing feeling is that Keselowski’s arrival with Roush will result in Newman’s ousting.

”I have not been told anything to note and I’m just doing my thing,” Newman said Saturday (May 29) after qualifying for the Coca-Cola 600. “My goal is to continue with the [No.] 6 car and focus there and try to get our Roush Fenway Ford in victory lane and have a shot and a chance to be in the playoffs and prove that we’re capable of more than people think we are.”

Ryan Newman on reports that Brad Keselowski will drive the Roush Fenway No. 6 car next year. Newman says he wants to continue racing: "I still haven't accomplished what I want to accomplish." pic.twitter.com/GERJbCtToU

Now in his 20th full-time season, Newman was pressed by FOX Sports reporter Bob Pockrass whether he wants to continue racing.

”I want to continue racing,” Newman said. “I love what I do. There’s no doubt that I’m very passionate about the sport, the people, the cars in many ways. I’ve got more experience and tenure to have, I guess, a more sound opinion about it. I like having that, and it’s not because I think people will listen to me. It’s because I think being an engineer and having a background the way I do, it makes sense.”

Newman made his NASCAR Cup Series debut in November 2000 before running a part-time schedule in 2001. He then went on to win one race Rookie of the Year honors in 2002 over Jimmie Johnson before collecting an astounding eight wins and 11 poles in 2003.

”The reality is I still haven’t accomplished what I want to accomplish,” Newman said. “I don’t know that I ever will. I might have Mark Martin syndrome. But in the end, he was around for a long time and he’d be a good person to ask if he did it right, if he retired right, if he’s happy, if he’s satisfied with his career.”

Newman will roll off 25th in Sunday’s (May 30) Coca-Coca 600 at Charlotte Motor Speedway while Keselowski starts 13th. Live coverage can be found on FS1 and PRN radio at 6 p.m. ET.

I hope he wins even though I pull for Kevin Harvick (and have since 1997).

Ryan Newman could be a big asset to a back marker team with all his engineering and driving knowledge.

I would love to see him go to Stewart Haas.

Tom B
Reply to  Dwayne

I thought he already was there and got fired.