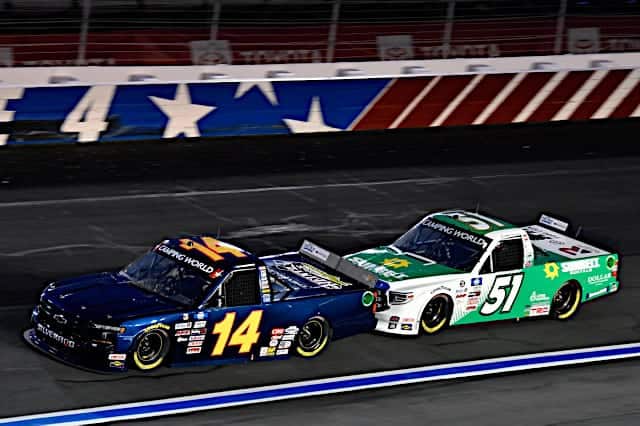 In a Nutshell: John Hunter Nemechek scored his third win of the 2021 season when he beat Carson Hocevar to the checkered flag by 0.419 seconds in Friday night’s (May 28) North Carolina Education Lottery 200 at Charlotte Motor Speedway. The victory came after Nemechek slid into the outside wall in turn 2 during practice, which forced the team to repair the truck. Despite that, Nemechek still dominated, leading a race-high 71 laps en route to victory lane.

“I completed two laps and wrecked on lap 3 [in practice],” Nemechek said after the race. “Huge shoutout to all my guys – [crew chief] Eric Phillips and all our guys here and back at the shop. The pit crew pretty much won the race tonight I feel like on pit road. We were able to jump some guys there after the first stage. It was so hard to pass. It was amazing. Eric did a great job making adjustments all night and I was telling him what we needed.

“This was our baby truck. This one has won three races for me this year and sadly it’s going to have to get fixed with that crazy crash. Just huge shoutout to everyone that made this possible – Kyle [Busch], thank you for the opportunity. Jack [Irving, TRD], Tyler [Gibbs, TRD], David Wilson [president, TRD] and everyone at Toyota and TRD for all their help, Mobil 1 as well. My wife’s here so we’re going to celebrate. Sadly, baby is back home sleeping, but she will have a trophy in the morning.”

Ben Rhodes, Stewart Friesen and Todd Gilliland rounded out the top five. The race was slowed by five cautions for 31 laps.

After qualifying sixth, Zane Smith ended stage one in fifth and followed up with a stage two victory. But under that stage two yellow, the driver of the No. 21 Chevrolet was forced to the rear of the field to serve a penalty for a crew member over the wall too soon. Mired in traffic, Smith had to run to the front and was 12th when the final caution flew. After restarting with 10 laps remaining, he recovered to a 10th-place finish. Smith likely would have been challenging for the win if not for the mid-race penalty.

Good truck tonight. Won stage 2 then had a pit road penalty with a man over the wall to soon. Drove from the back twice at the end there to finish 10th thanks @GoodSamFamily, @GMSRacingLLC. Gotta stop with the mistakes & then I think we will be able to grab a win!

With just over 20 laps remaining in Friday night’s race at Charlotte, Trey Hutchens suffered a flat tire that sent him into the outside wall in turn 4. His heavily damaged truck limped along on the high side of the track with the field still running under green when Johnny Sauter and Drew Dollar came across him, running substantially faster. With no time to react to the truck in the racing groove, Sauter plowed into the No. 14 Chevrolet and went spinning. The impact was enough to rip the sides off of both Hutchens’ and Sauter’s trucks and sent debris flying everywhere.

A frightening and violent crash for Johnny Sauter in Charlotte. He climbed out and is okay. pic.twitter.com/g0C7XuB5AR

After what seemed like an eternity, both Sauter and Hutchens dropped their window nets, signaling they were alright, though it took entirely too long for the safety crews to get to them. Both drivers were, thankfully, released from the care center after their mandatory trips.

Sauter initially declined interviews after leaving the care center, though he did later speak to media in the garage area.

Johnny Sauter says he is fine after that hard crash. pic.twitter.com/AqtfdeQXDd

Despite the hard hit, Hutchens was also alright after the heavy contact, though his only truck is destroyed.

Trey Hutchens says he is fine after that hard crash. pic.twitter.com/YYkYgNaQ3e

The truck that Hutchens was driving is the only truck his team has, and while they’re working on putting another one together, it doesn’t have a motor. Enter an offer from Marcus Lemonis who tweeted “Give him my number … we will get him set up.”

The front of the field even drove straight through the flying debris, including leader and eventual winner Nemechek, whose truck suffered significant roof damage.

“We got damage there when [Sauter] ran into whoever it was that was stopped on the top, knocked the camera off and put a pretty big hole in the roof,” Nemechek explained during his post-race Zoom media availability. “Sadly, it’s going to have to go to the repair shop after not having a scratch on it other than the right rear tail from me earlier.”

Nemechek said he didn’t see the tire hit his windshield in the wreck. He said he just heard a thump. ⁦@NASCARONFOX⁩ pic.twitter.com/vdpoRfRxN3

“It was nuts. I didn’t see the truck up against the outside wall,” Nemechek continued. “All of sudden, I knew I was running down the guys in front of me. It was pretty much like a fireball and stuff flying everywhere. I kind of just shot for the middle – kind of a Days of Thunder moment I guess — and just hoped for the best. I didn’t know where trucks were going; you couldn’t really see at that point, there was so much debris flying.”

There are multiple problems to unpack here. First and foremost, why didn’t the caution fly when Hutchens hit the wall? After all, NASCAR has been quick to throw the yellow for a single-truck spin where the driver straightens out and continues right on without hitting anything. Why on earth wasn’t the caution displayed, especially given the damage to Hutchens’ truck prior to being hit by Sauter?

Additionally, what in the world took so long to get the safety crews to the drivers? The minute that contact was made, the call should have already been to the safety trucks to ensure they were mobilized and ready to get to those drivers and ensure there weren’t serious injuries involved. While all sense of time tends to stop while waiting to see if a driver is alright after a vicious impact and it’s hard to gauge just how long the wait actually was (I didn’t get out a stopwatch to find out), it’s not good when people all over Twitter, including other drivers not racing in the series, are questioning what’s taking so long.

While NASCAR didn’t make a comment about what took so long to get the safety crews to the crash, they did issue a statement on why the caution was not out for Hutchens’ initial crash.

NASCAR: At the exact time the 14 had its incident, the 88 was smoking and speeding down pit road. The focus was on that and whether there was any oil on the track that needed cleaning to avoid any further incidents. Once the collision occurred with the 13, we threw the caution.

While I can appreciate NASCAR paying attention to a blown motor and whether oil was being laid down on pit road to the point where it would necessitate a cleanup, the problem that remains is that there should never be a spot on the track where a driver is running that isn’t being watched by an official. Anyone who’s been watching this sport for even a short time knows that anything can happen at any point on the track.

That there wasn’t someone paying attention to the entirety of the track is troublesome at best, downright dangerous at worst. There are about a zillion what-if scenarios that could have happened, and thankfully no one was injured or worse. But it’s prudent that NASCAR evaluate how it watches the races to ensure the track is completely covered. No exceptions.

All of that criticism aside, can we take a moment to once again appreciate the safety innovations that have been put in place throughout the years? That wreck easily could have resulted in serious injury or worse and yet the drivers walked away.

The drivers walked away.

That’s something to be proud of and something we can ALL agree is a good thing.

The p7 finish doesn’t show how good our @SimCraft @ToyotaRacing truck was tonight! We had a bullet and they knew the ol 66 was there. So thankful for everyone at @ThorSportRacing for giving me this opportunity. See you all in Nashville! ??

The day is over for the No. 26. pic.twitter.com/RMHfYHUJ9H

No. of rookies in the top 10: Carson Hocevar, finished second

Point Report: John Hunter Nemechek expanded his point lead to 44 over Ben Rhodes, who remains second. Austin Hill moved up a spot to third, while Sheldon Creed dropped to fourth. Todd Gilliland rounds out the top five and sits 116 markers behind the leader.

Zane Smith jumped two positions to sixth and is followed by Matt Crafton, who dropped one position after his first DNF this season. Stewart Friesen gained on spot to eighth, while Grant Enfinger drops two to ninth. Rookie Carson Hocevar rounds out the top 10. He currently holds a 43-point margin over Johnny Sauter in 11th.

Win No. 3 of the 2021 season for @JHNemechek and the @Mobil1 team. He explains his race winning run: pic.twitter.com/E9CgNWYZSQ

.@JHNemechek WITH LITTLE TO NO REGARD FOR HUMAN PHYSICS ???

Fourth place tonight for us at @CLTMotorSpdwy. Thanks to our fans for pulling for us! We’ve got three more dirt races to get through in the next three days! Let’s go! pic.twitter.com/BlAffC9qGO

Brought it home P8. Solid race for this @BMR_NASCAR @NAPARacing @ToyotaRacing team, feels good to close one out.

We’ll work on some little things and get ready for Texas in a few weeks! pic.twitter.com/xAqNcizHCY

Awesome @FarmPaint Tundra tonight. Disappointed we didn’t get the finish we deserved, drove from 22nd to the top-5. Last restart just got put in a bad spot, onto Pocono!

Overall solid night for us, had to start pretty deep and got some RR Quarter panel damage early on, once we got that fixed we started our charge to the front and ended up P6, onto the next? pic.twitter.com/qqKNMpu4Cf

How this race truck isn't completely torn up, we may never know ???#NCEL200 pic.twitter.com/vrleAy8tWM

Best 1.5 mile @LIUNA @TeamChevy @GMSRacingLLC @CLTMotorSpdwy truck we have had all season. We will continue to dig deep and deeper.

Up Next: The Truck Series takes a weekend off before heading to Texas Motor Speedway for a doubleheader with the Xfinity Series. Coverage for the SpeedyCash.com 200 begins at 1 p.m. ET on FOX Sports 1.