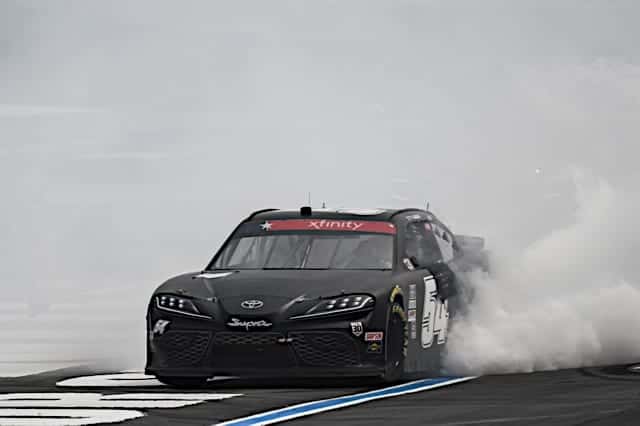 In an unmarked, unsponsored Toyota Supra, Ty Gibbs became the youngest Charlotte Motor Speedway winner when he held on to win the NASCAR Xfinity Series ALSCO Uniforms 300 on Saturday (May 29).

“It’s definitely nice to win on an oval, especially in my hometown,” Gibbs told FOX Sports 1, mentioning his blank Supra. “There’s a lot of open real estate, so hit me up.”

Gibbs came back strong after an early spin on the frontstretch at the end of stage two which resulted in no damage to the car. He was also involved in an incident late in the race, which saw Chase Briscoe spinning off of turn 2 during a hard, no-contact battle. After leading 60 laps, Briscoe’s Ford began to fade prior to the incident.

“That last run we just weren’t as good,” Briscoe said after the race. “We were really good the two previous runs and we tightened up and the track tightened up as well, and I was just struggling to even maintain my lead.  I knew about lap 10 of that run I was gonna be in trouble just because I was already building tight. Ty was gonna get me, I think, either way.  It’s unfortunate.”

As for Gibbs, he was conciliatory after the race in regards to the incident.

Gibbs: "I wasn't trying to wreck him. I was trying to race him."

Briscoe rebounded for a strong sixth-place finish. Brandon Brown took advantage of being the only driver on the lead lap with a fresh set of tires in the pits when Briscoe spun out and used that fresher rubber to charge up to a career-best fourth-place finish. Tyler Reddick, driving once again for Jordan Anderson Racing, finished fifth.

Briscoe recovered from his lap 183 spin to finish sixth in his Stewart-Haas Racing-fielded entry for BJ McLeod Motorsports. Ty Dillon was seventh, while Brandon Jones, Jeb Burton and Jeremy Clements rounded out the top 10.

Calamity was the tune of Saturday’s song. From lone spins to day-ending accidents, there were 10 cautions throughout the race. The first yellow flag of the day was for Camping World Truck Series regular Grant Enfinger, who was making his Xfinity Series debut in place of Brandon Gdovic for Sam Hunt Racing.

After a struggle in qualifying, Enfinger was attempting to make his way forward, but failed to completely clear Chad Finchum in the quad-oval. That contact turned Enfinger into the wall and out of the race.

On lap 151, after Ryan Sieg led the field to a restart, he became loose on old tires, holding his car sideways through the apex of turns 1 and 2 before making a right turn up the banking in the exit of turn 2. Subsequently, Sieg spun in front of Josh Berry and Brett Moffitt, who both took hard hits with no chance of avoiding Sieg’s out of control Chevrolet Camaro. Sieg, who had gained 15 spots by taking no tires during the previous caution flag run, was able to drive back to the pits, but drove directly behind the wall, ending his day 48 laps shy of the finish.

“We were on edge all day, just the nature of the track,” said Sieg, whose best finish at Charlotte Motor Speedway is an eighth back in 2019. “We’re trying to just get a win, that’s all we’re really focusing on.”

In the last caution of the day on lap 186, numerous drivers bunched up as they made their way into turn 1. Contact between teammates Daniel Hemric and Brandon Jones created a chain reaction incident.

They ran out of room quick. Big crash after a late restart in Charlotte!#DriversOnly | #NASCAR pic.twitter.com/COOdDZZOsX

Hemric, who has been strong for a majority of the season while still searching for his first Xfinity Series win, was collected along with Justin Haley, Michael Annett, Noah Gragson and Tommy Joe Martins. Hemric led a race-high 105 laps, but was forced to settle for a 28th-place finish.

The NASCAR Xfinity Series returns to on-track action on Saturday, June 5 at Mid-Ohio Sports Car Course for the B&L Transports 170 at 1 p.m. ET on FS1.

How does this car pass inspections? Why did Monster Energy drop the major car sponsorship? I understand they still sponsor Ty but why not the car?
It’s nice to be young, winning and a solid racing future.