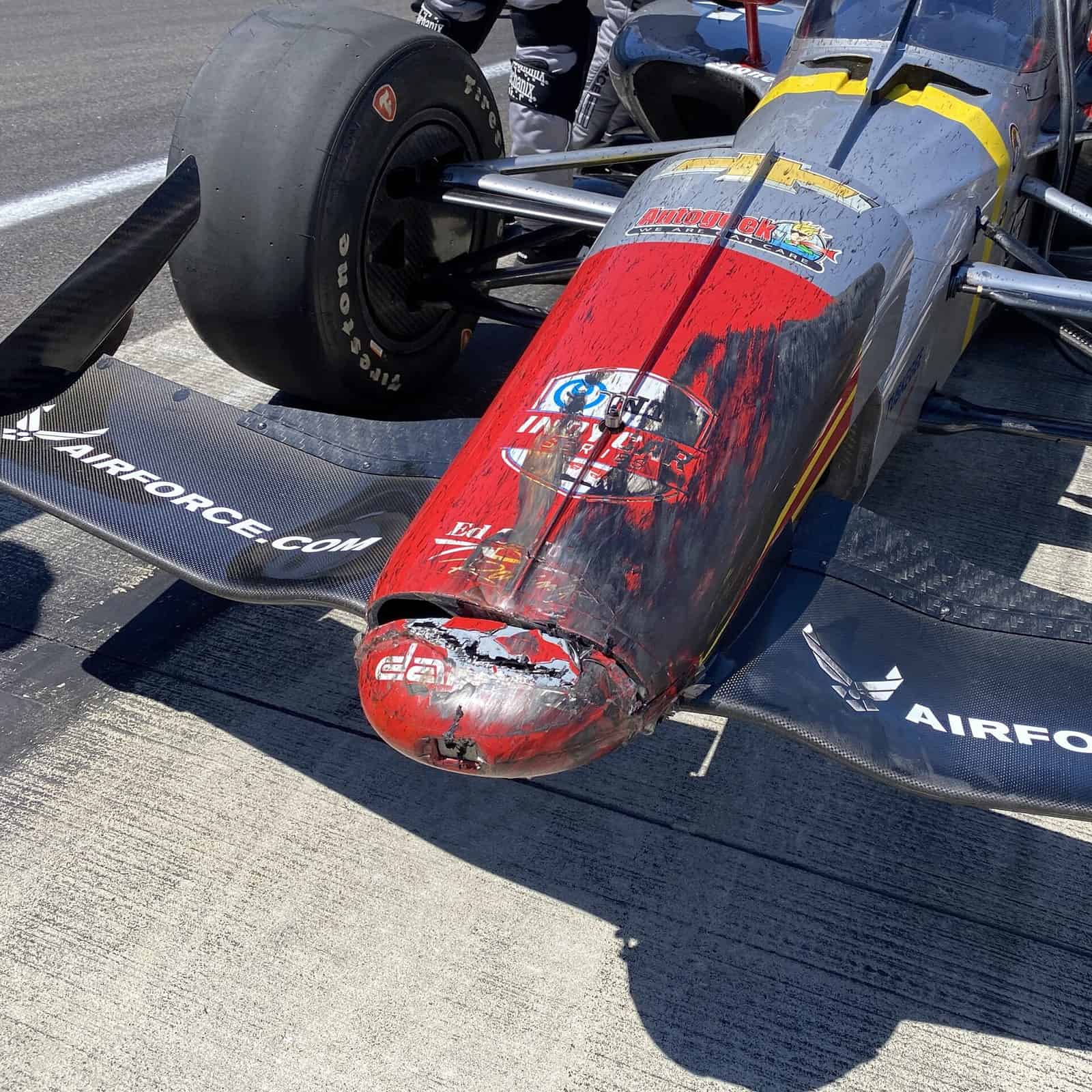 Lady Luck giveth and Lady Luck taketh away. At the 105th Indianapolis 500, Conor Daly led 40 laps, the most of any driver in the field. However, Daly’s racing luck ran out on lap 119 of 200.

When Graham Rahal exited the pits following his third pit stop, the left rear tire fell off of the No. 15 Rahal Letterman Lanigan Racing Honda, pitching Rahal into the turn 2 wall and ending a good run for the Ohio native.

Rahal’s left rear tire continued to bounce down the track and after bouncing off of Rahal’s car, Daly struck the tire with the nose of his No. 47 Ed Carpenter Racing Chevrolet, causing significant damage.

“I think we got to run really where this car deserved, it was a great race car, such a great race car,” Daly said on pit road after finishing a disappointing 13th. “And then when Graham crashed, I thought we had avoided everything, I was like ‘All right this is great,’ and literally out of nowhere it’s as if a tire just fell from the sky.

“We have that little visor strip with the aeroscreen, so like you can’t necessarily see all the way up in the sky, but you don’t think you need to see that high and like right at the last second it was just ‘BOOM!’ and I was like, ‘Oh my gosh, well, that’s it.’ Thankfully it didn’t hit the suspension, but our car was ruined from then on. I mean we lost about 2% CoP (Center of Pressure) but it would’ve taken way too much time to change the wing, so, you know, Conor Daly luck strikes again sadly, but that was so fun today, it really was for a long time.”

Daly had never before led at Indianapolis and his best finish was a 10th in 2019 for Andretti Autosport. The Noblesville native received large cheers from the crowd as he took the lead for the first time on lap 50. However, the largest cheers were reserved for eventual race winner Helio Castroneves when the Brazilian won his fourth Indianapolis 500, tying A.J. Foyt, Al Unser Sr. and Rick Mears in the four-time winners club.

“I mean, what a cool thing and to hear the crowd, this incredible crowd go crazy like that,” Daly said. “And to actually have at least seen him once on track, and that was great to race with those guys. I mean, Helio [Castroneves] and Rinus [VeeKay] and Pato [O’Ward] and guys that we know are good, right. And I love when we get to race up at the front because it’s a much more respectful area and we led at the Indy 500 so it was really really cool.”

Daly’s car was significantly hampered by the nose tip on his car being out of alignment, but the crew tried to adjust the car to compensate for the way the handling changed on the car. However, the damage done by Rahal’s tire was too much to overcome.

“Honestly I think we did our jobs today. We called the right strategy, our car was really fast, I mean we trimmed it out like crazy at the end, I mean I was hanging onto it just because this thing was sort of a lame duck in the front so it was tough, man, but there was a lot of things that we can take from this and it was really really cool to be out there in front.”

Daly will go back to his regular road and street course driving duties in the No. 20 Ed Carpenter Racing Chevrolet on the streets of Detroit at Belle Isle Park on June 12th and 13th.