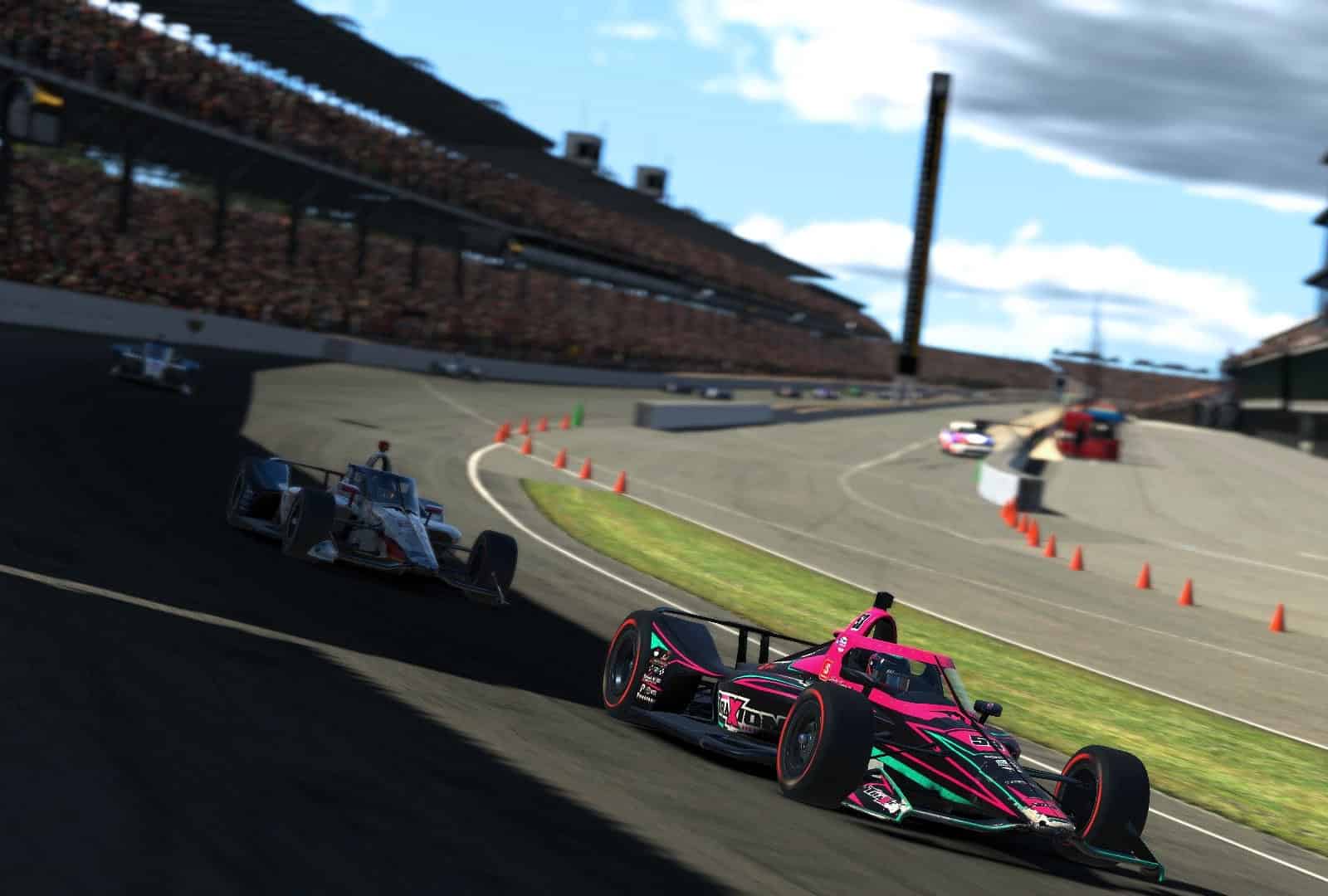 As we start to wrap up the month of May, all of the official iRacing Indianapolis 500 races are complete on both the fixed and open setups. Thousands have participated in the festivities both last weekend and this weekend, about 200 different drivers through all the splits able to taste the virtual milk and thousands more like myself that have been left empty-handed.

The iRacing 600-miler at Charlotte Motor Speedway in the official NASCAR iRacing Series is also wrapping up this weekend, so the summer swing is nearly upon us. Sooner than later, like in NASCAR, tracks like Sonoma Raceway, Pocono Race, New Hampshire Motor Speedway and more will be staples running throughout the big leagues and small leagues

This issue of the iRacing Weekly Roundup takes a look at the recent news from the world of iRacing. We’ll also recap the last two weeks in our leagues at 100% Cup Series, FTF Racing and Monday Night Racing presented by NAPA. Also, the eNASCAR iRacing Road to Pro Series is two races away from the end of their first half of the qualifying series. We’ll take a look at the Top 70 as they run with help from John Gorlinsky and Nicholas Morse.

Two weeks ago was a big week for NASCAR at COTA, with Circuit of the Americas hosting two virtual races back-to-back earlier in the week. The eNASCAR Coca-Cola iRacing Series saw Mitchell deJong dominate flag-to-flag for his first career victory in his eighth career start. The following night, James Davison put on a clinic in the eNASCAR Pro Invitational Series race for his first career virtual victory in the series.

A controversial race at Charlotte this past week, the Coca-Cola 300 for the eNASCAR Coca-Cola iRacing Series drivers, saw Chevrolet drivers fighting for grip while the Ford and Toyota drivers were able to drive as normal. Ray Alfalla’s Toyota took the victory over Malik Ray’s Ford, but the news came out a few days later that the Chevrolet had gotten an inadvertent update that caused it to perform worse in a field of cars.

The fix was implemented on Wednesday morning and a statement was issued by iRacing President Tony Gardner on Thursday, as the issue not only affected the Coke Series but the entire service utilizing the NASCAR Chevy. Some of the leagues covered in the iRacing Weekly Roundup may have had to deal with some of these issues and not known about it, as the rogue update took effect on May 5.

From @iRacing President @TonyGard in the iRacing forums; an acknowledgement of the NASCAR Chevrolet Camaro ZL1 being at a disadvantage since May 5th due to an update. The mistake has been fixed as of the patch yesterday. pic.twitter.com/JAC7cZS1i3

At the halfway point of the regular season following Dover, it’s looking to be turning into a heads up match between Bryson Hixenbaugh and Jon Dulaney for the top of the standings. Robert Miller, however, has only made three starts prior to Dover, and despite not yet finding victory lane, he’s collected two convincing top-five finishes and was looking for more two weeks ago.

Hixenbaugh took the pole position at Dover in the Throwback Drip 400 and led early and often until a handful of cautions mixed up the running order. Miller wound up taking advantage and took the stage one win. Later on, Hixenbaugh battled back around to take stage two.

In the final stage, Hixenbaugh and Miller were able to lap the rest of the field. Hixenbaugh had the advantage and held off Miller to take his fourth win of the season to extend his points lead over Dulaney.

Its starting to look alot like 2020 ?
Hixenbaugh adds another track's checkered flag to his collection!!!#iracing #enascar #nascar #leagueracing #Simracing pic.twitter.com/mcdMWDT9dl

For only the third time this season, the 100% Cup Series didn’t have a broadcast to go back and watch for their 14th race of the season, a full-length, 68-lap event at Circuit of the Americas.

Jon Dulaney clawed back into the fight for the top spot with a dominating performance last week. Dulaney led 54 laps and swept the stages, earning back 12 points to Bryson Hixenbaugh who finished second.

Only 20 drivers made the trip to virtual Austin, and the long inaugural event only saw two cautions for six laps.

Dulaney winning big at COTA. Congrats to him and his team! Did it on easy mode (no rain) but still counts ;)#iracing #leagueracing #simracing #nascar #enascar #cota #WINNER #winning pic.twitter.com/kYqAgAMzFt

After 14 races, only six drivers have visited virtual victory lane. Hixenbaugh, Dulaney, and Adam Benefiel make up 11 of those 14 race victories, three of the most dominant in the series. Cameron Stone only has one victory on the season, but his consistency has him ahead of Benefiel, in third, with 12 races until the playoffs.

Two weeks ago, the FTF Cup Series went to the concrete banks of Dover International Speedway for the Davy’s Doobies 200. Brian Mercurio led a good portion of the race, winning the second stage of the race, but towards the end, a couple of late-race yellows put the race in the hands of eNASCAR driver Michael Guest. Guest took his third win of the season and first while running in the Gen 6 Cup car.

Michael Guest please put sponsorship on your car if you continue to win races at our league. Congrats but this is like the 7th time this season a blank car has won this season and Marcus is NOT going to be happy about blank cars in his future league.

The first road race on the FTF Cup schedule gave the field their biggest challenge yet, but for the first time, it felt like the drivers were finally able to put on a respectable show. With only two cautions on the entire night, one of which was scheduled by the admin team, it turned into a battle of chess between Brandon Hawkin and Will Norton. Hawkin pitted short on the final stop, giving Norton the advantage on gas to the end. As Hawkin had to save, Norton was able to pull away for his first career FTF Cup win.

Only two cautions, and one of them we threw on purpose.@WillNorton25 won for the first time. That's pretty neat.

We raced at COTA.@KicknTheTires sponsored it.
Go check them out.

Through 14 races, despite having no victories, Brian Mercurio continues to lead the standings with another non-winner, Tyler Garey, sitting in second. There have been 10 different winners so far, but two of those drivers aren’t a part of the playoff grid as they don’t have the required starts or points position to be included. Jake Fisher could still use his win, currently 27th in the standings, but Carson Hocevar is off doing bigger and better things like almost winning at Charlotte in the Truck Series on Friday night.

After a superspeedway race and a road course event, the first dirt race of the season did not disappoint. The field was set by heat races and five drivers failed to qualify for the main event. Shane van Gisbergen, who won at Watkins Glen International the week prior, did not start off as the fastest driver on dirt, but by the end he was able to take control and hold off Max Kennon and David Schildhouse for his second straight win.

Quite possibly the biggest race of the regular season with a cash prize and double points on the line, MNR’s version of the Indy 500 took off and had a fantastic showing from their drivers. Thirty-four of them took the green flag on Monday night, all led to the green by Anders Krohn.

Krohn led early and often until Justin Melillo took control of the situation on a rogue pit strategy. DJ Cummings and Will Rodgers led for a bit before they wrecked out, and then it was Gary Sexton’s turn to try the off-strategy call. It didn’t work out for Sexton, who had to pit for gas late. When it came down to it, Adam Cabot went toe-to-toe with Robby Lyons in the closing laps with Cabot coming out on top.

After four races, Anthony Alfredo continues to lead the standings over Cabot and Kennon. Cabot, SVG and Matt Stallknecht have wins and will own spots in the 13-driver playoff field if they make the minimum starts required.

Check out the previous broadcasts over at Podium Esports.

The Charlotte race week might have made the biggest definition of what the Top 70 will look like once the final race at Dover is completed. As reality begins to set in for many hopefuls, the number of splits was at its lowest all season with only 14, a major decrease from 36 splits in the first week.

According to eNASCAR driver John Gorlinsky’s spreadsheets that he famously produces every Road to Pro season, after factoring in a drop to the equation, only 178 drivers are mathematically in contention for the Top 70. However, the standings on iRacing won’t reflect that drop until the season ends.

Sixteen of those 178 drivers should theoretically be good to go no matter what happens for the rest of the season, and up to 52nd should be locked in should those drivers continue to make starts and improve upon their current drop.

Per Nicholas Morse, current competitor in the series and formerly in the Coke Series, his math for locking in drivers and eliminating all the same is slightly different, but it’s worth noting how competitors are adding up what they need to make the next round of the qualifying series.

THREAD:?We had some guys officially lock into Round 2 of the #eNASCAR @iRacing Road To Pro Playoffs after @CLTMotorSpdwy. You'll need 1,610 points to transfer (credit: @bryanblack33) and the following guys got that with their finishes last night.#ENASCAR | #IRACING pic.twitter.com/uhyXtDN7r9

At Charlotte, Cody Byus put on a dominating performance in the top split on Podium Esports. Just less than two years ago, it was a bad ending to a promising night at Charlotte that saw Byus fall outside the cutoff to return to the Coke Series. With the RTP win, Byus is in a more comfortable position to advance onward and back to the top level. Garrison Hogan took the second split on STN Racing.

TOP 5 SPLIT WINNERS AT CHARLOTTE (May 20)

Notable names currently outside the Top 70, with a drop included into the equation, that still have a slim chance include Brandon Kettelle (72nd), Adam Gilliland (74th) and Carson Hocevar (88th).

100% Cup Series will visit Charlotte Motor Speedway for their longest race of the season, 600 miles on Saturday night at 8:30 p.m. ET. The replay will be available on 3 Wide TV as the race will already be completed by the time this article is posted.

FTF Racing will not be racing a points-paying race, but instead they will be racing their All-Star race on Sunday in between the real life Indianapolis 500 and the Coca-Cola 600. The series will return to regular racing next weekend at Sonoma Raceway, and that will go live at 8 p.m. ET on BottomSplit.

Monday Night Racing has a week off for Memorial Day. Their series returns on June 8 with the Mazda MX-5 cars at Lime Rock Park. The broadcast will start at 8 p.m. ET on Podium eSports.

Finally, eNASCAR Road To Pro will run their penultimate race of the first qualifying round at Martinsville on Thursday night. The broadcasts will go live at 9 p.m. ET on Podium eSports and STN Racing.

Jon Dulaney is dominating 100% cup the past few races. Might need to get an interview from him <_< lol. Good stuff!!!