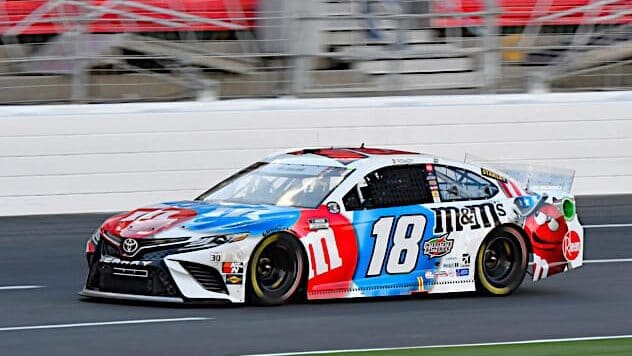 Despite putting on a bit of a show in the final laps, Kyle Busch “had nothing” for Hendrick Motorsports in Sunday night’s (May 30) Coca-Cola 600.

The Joe Gibbs Racing driver was the last vanguard against another 1-2-3-4 finish by Hendrick as Kyle Larson won over Chase Elliott, while Busch placed ahead of William Byron and Alex Bowman.

It was Busch’s fifth top five of the season.

“Overall, just a really good night for us,” Busch told FOX Sports. “This M&M’s Camry was fast. [Crew chief] Ben [Beshore] and the boys did a really, really good job. I appreciate it for what all we had. It was enough to be able to go out there and run strong. Tried to break [Hendrick Motorsports] up, I didn’t want them to finish 1-2-3-4 again. So at least I could get in the middle of them there.”

Busch was one of the biggest movers of the race, advancing 17 spots over the 400-lap event after starting 20th. He placed sixth in the first stage and fourth in the second.

“We didn’t qualify as good as I wanted to, I was pissed off about that,” Busch said. “We rallied in race trim so that felt good.”

He made it as high as second-place twice, restarting there on the final restart with 93 laps to go before briefly passing Elliott for that position with 57 laps to go.

Busch threatened to pass both Byron and Elliott at once with 11 laps to go, but interference from lapped traffic limited him to just taking third from Byron.

Busch said the No. 18 was missing “overall raw speed” compared to what the Hendrick cars were able to produce as the team combined to lead 374 laps.

“All night long we were just kind of tweaking on it here and there,” Busch said. “I knew there were little things we could do to improve it. We probably took it from about a seventh-place car to a third-place car. Thought we had a second-place car there before the final pit stop. After the final pit stop, it just wouldn’t take off, it wouldn’t go so something was different.”

When it comes to where his team is competition wise compared to Hendrick, Busch said JGR is “not close enough.”

During the cool-down lap, Kyle Busch told his team "We have a problem with HMS."#NASCAR

KFB was the only driver who made this race interesting. I only wish we had had some cautions to let strategy and restarts and DRIVER SKILL play into the outcome

You are clearly a fan of HMS. I am a fan of 2 drivers, one of whom unfortunately drives for HMS aka Felony Motorsports.

HMS in the person of Chad Knaus is doing a good job. That’s not my issue. The problem is that the races are BORING. The Indy 500 was light years better than the Coke 600 with better drivers, better teams and a better race.

There is no legitimate reason for calling the Coke 600 anything but boring, especially compared with the real racing we saw earlier in the day. I’m enough of a fan to cheer NASCAR’s turn away from cookie-cutter 1.5 mile tracks to road courses and short tracks where driving skill actually matters.