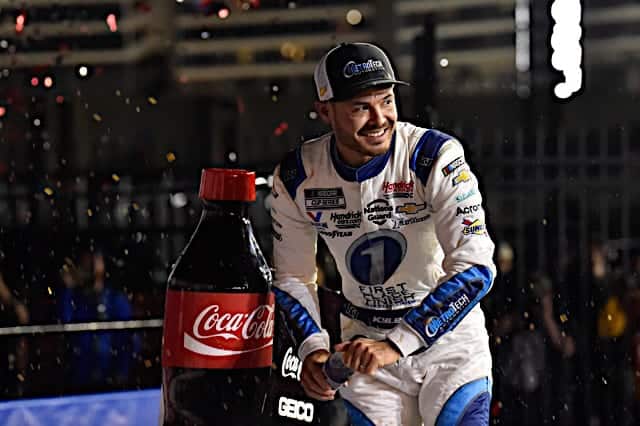 Total domination. That was the theme for Kyle Larson and Hendrick Motorsports as a whole on Sunday night (May 30) in the Coca-Cola 600 at Charlotte Motor Speedway.

Larson, who led 327 laps, scored his second victory of 2021 while his HMS teammates filled out the second, fourth and fifth positions, the only break in that order Kyle Busch‘s Toyota in third. Chase Elliott came home in the runner-up spot, while William Byron finished behind Busch and Alex Bowman rounded out the top five. The No. 5 of Larson also swept all four stages.

The win was HMS’ 269th in NASCAR competition, vaulting the Chevrolet stable above Richard Petty Enterprises for the most ever wins by a team in history. Elliott’s victory at Circuit of the Americas last week tied the mark at 268.

"Number 1, Richard Petty is the king of NASCAR … It's unbelievable."

Talking with Rick Hendrick as his team passes Petty Enterprises for the most Cup Series victories in NASCAR history. pic.twitter.com/fSTFNJVTNo

“I am proud to congratulate Rick Hendrick and all of Hendrick Motorsports on breaking the all-time wins record for a NASCAR Cup Series race team, long held by the legendary Petty Enterprises team,” NASCAR Chairman and CEO Jim France said in a statement. “With nearly 40 years of excellence, Hendrick Motorsports has set the gold standard for race team success. Rick Hendrick has already cemented his legacy as a NASCAR Hall of Famer, and now adds another incredible accomplishment to an exemplary NASCAR career.”

The pole sitter for the race, Larson had never won a contest longer than 400 miles before Sunday and secured his first in the longest event of the year. It was his first win since Las Vegas Motor Speedway in March, as well as the third straight 1-2 finish for HMS. Larson also followed up a run of three straight second-place finishes with the pole and the victory, the second such time in his career.

“It feels good,” Larson said after the race. “It was not easy, I felt like I had to fight off William and Chase a lot. It kind of worked out there that last run, the [No.] 43 had to pit and pulled out in front of me, I just towed with him for a while and stretched my lead out. We had a good car there that last run. [It’s] awesome, it feels great to be the guy to help Mr. H break that record finally.”

HMS broke the mark in style, posting three straight wins on the Cup circuit for the first time since 2015. Their first and last win of the 269 came in the same flagship No. 5 Hendrick used for his first NASCAR Cup team in 1984 with Geoffrey Bodine.

A loose wheel for Daniel Suarez, who started in the top 10, knocked him down two laps in the most eventful moment of stage one while Larson cruised to victory. Mechanical problems for Chip Ganassi Racing’s Ross Chastain and Kurt Busch forced both cars under inspection from their crews as well, which was followed by Busch’s engine completely letting go and causing the first natural caution of the night in stage two. Extremely close racing and near misses also dotted the opening stages.

Elliott and Larson swapped the lead before Larson settled back into the top spot, where he claimed the second and third stages, the latter under caution. That yellow at the end of stage three flew for Ryan Newman hitting the wall, while the pit stop cycle that followed was not without drama: a tire from Bubba Wallace‘s stop rolled into Chris Buescher‘s stall and NASCAR ruled the wayward equipment interfered with the No. 17 crew. The setback ended a top-10 run for Wallace, who dropped to 14th by the finish.

Hendrick appeared to be threatening to repeat their stellar 1-2-3-4 Dover performance, but Kyle Busch’s top-five appearance threw a wrench into those plans. Busch had one shot to pass Larson on the final stage restart, briefly sneaking ahead from the front row. But the two-time Cup champion couldn’t make the pass stick.

“I’m going to have to wreck ’em,” Busch joked on the radio about his rivals when asked by FOX Sports how he could win. He was never able to seriously challenge after that restart and wound up battling hard with Byron and Elliott for second.

Larson, meanwhile, sailed away and won by more than 10 seconds, the largest margin of victory in a NASCAR Cup race since Sonoma in 2018. It’s a stunning turnaround for a driver who didn’t even have a NASCAR ride this time a year ago.

“When I got to talking to Ricky Stenhouse [Jr.] last year, I was like ‘ah, I think I’m gonna end up in the [No.] 5 or one of the Hendrick cars,” Larson added. “And he was like, ‘you’re gonna do really, really good in that thing. […] It’s been better than I could have ever imagined, for us to lead as many laps as we have this year, contend for as many wins as we have and now to get our second win, a crown jewel event too, it feels great. Just very lucky that Mr. H was able to put a deal [together] for me and it’s just awesome. I’m living the dream, for sure.”

Hamlin kept his lead in the standings but Larson closed the gap; it’s now 76 with 11 races left in the regular season. Solid runs by Reddick and Buescher widened the gap over the final playoff spot to 55 over Matt DiBenedetto in 17th.

The Cup Series gets back to road racing next week with a date at Sonoma Raceway, where they’ll make left and right turns in the Toyota Save Mart 350 in California. Coverage is set for Sunday, June 6 at 4 p.m. ET on FOX Sports 1.

No way sponsors can ignore 3 seconds in a row and Kyle’s dominating win tonight. And to think, he’s finally learning to not over drive his car has to be scary for his competition. Great race for him and HMS.

of course their is. What will they get for their money, and what options do they have? I do think that ultimately a firm will take a chance on him. But I doubt if they pay the top of the rate card.
Takes a while to rehabilitate someone.

Bet Jeff owns at least half that car too.

A great win for local hot shoe, Kyle Larson. I thought that was a nice gesture to let his teammates lead a few laps. I’m sure that was noticed by Mr. H.

I sincerely hope you’re kidding. Larson is not a team player and that may well be his downfall once the Playoffs start.

Has the nay says changed their mind on Larson’s driving ability? I would like to see how he could do in an Indy Car on an oval. If successful there he could be in the same paragraphs with AJ Foyt.

Jo
Reply to  Tom B

That’s hilarious! Larson wouldn’t make it past the parade lap in an Indy car.