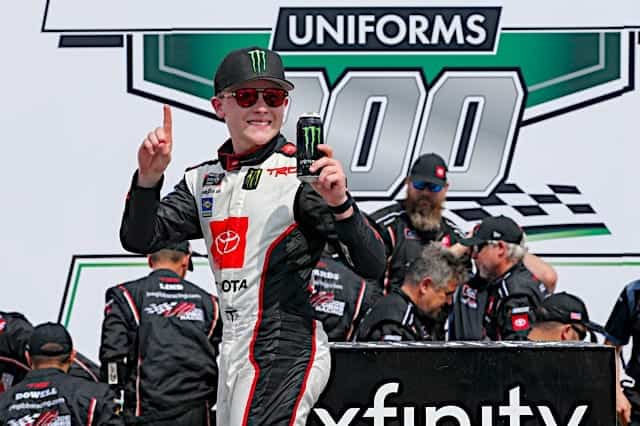 In February, Ty Gibbs briefly went dirt trackin’, making a pass in the grass, before winning on the road course at Daytona International Speedway. You can now check “spin and win” off the list of ways Gibbs has won a race.

In Saturday’s (May 29) Alsco Uniforms 300, he spun exiting turn 4 coming to the end of stage two, but the 18-year-old’s Toyota suffered little to no damage and continued with ease and marched his way back towards the front en route to his second victory of his career and 2021.

His Joe Gibbs Racing teammate Daniel Hemric dominated the opening two stages of the race, but his car faded slightly in the first 20 laps of the final stage and Chase Briscoe, driving the No. 99 Ford for BJ McLeod Motorsports, took control.

As the race approached 20 laps to go, Gibbs was in second place and stalking Briscoe. After a failed attempt to pass Briscoe on the front straightaway, Briscoe slowly edged in front as the pair closed in the backstretch with 20 laps to go. Gibbs washed up on the corner exit ever so slightly and packed air on Briscoe’s left rear, spinning him around. Briscoe avoided hitting the wall and recovered to finish sixth. However, Gibbs survived two restarts to win his first Xfinity Series race on an oval.

Ironically, when Gibbs spun on lap 90, he washed up on the exit of turn 4 and made very slight contact with Briscoe as he attempted to keep from wrecking both of them.

One week later, it’s the same team, same driver, but only a different track. Jordan Anderson Racing now has two top 10s to its name in its first two starts in the Xfinity Series. Tyler Reddick delivered an eighth-place finish last week at Circuit of the Americas and Saturday produced a fifth-place finish for the team. It was a hard-earned top five, too.

Reddick started 16th and fell backward into the mid-20s. He battled a loose racecar and the traction compound didn’t activate the way he would have liked. He wasn’t even able to make running up right next to the wall work. As the race wore on, his Jordan Anderson Racing Chevrolet slowly found more speed.

He finished 10th in stage one but was handed a speeding penalty during the pit sequence, forcing him to restart 33rd before he drove his way up to 12th by the end of stage two. His fifth-place finish was aided by a late-race wreck that took out a few top-10 runners, but he capitalized on the position he was given.

Reddick has proven that the Jordan Anderson Racing Chevrolet’s have a bit of speed in them, maybe even exceeding expectations. And the points Reddick has accumulated for the team will prove valuable over the next four weeks as there won’t be qualifying until Road America on July 4 weekend. Reddick’s performances have earned the team 71 owner points, good enough for 41st, 10 behind MBM Motorsports’ No. 13.  However, since Josh Berry, who won at Martinsville in April, will be driving, the team will be locked into the B&L Transport 170 at Mid-Ohio on June 5, likely forcing the No. 13 out of the race.

Since Jordan Anderson Racing would have the tiebreaker over MBM Motorsports’ No. 13, Berry would have to score just 10 points at Mid-Ohio to lock the team in for Texas.  That assumes that no point penalties are assessed.

Before qualifying took place on Saturday morning, Sam Hunt Racing announced that Grant Enfinger would replace Brandon Gdovic in the No. 26 Toyota. Gdovic reportedly wasn’t feeling comfortable in the car, and the decision was made for Enfinger to qualify and race the car.

Enfinger started 35th, but on lap 27, contact with Chad Finchum’s left-front fender resulted in Enfinger sliding into the wall on the frontstretch. It was not the race Sam Hunt Racing needed from a veteran racer and not the Xfinity Series debut Enfinger wanted.

Saturday’s race wasn’t an excellent look for Riley Herbst, either. On a weekend where there was practice and qualifying — both of which resulted in Herbst posting the quickest times — a 12th-place finish with no stage points doesn’t look good.

To make matters worse, the driver (Briscoe) he succeeded in driving the No. 98 Stewart-Haas Racing Ford was in a Stewart-Haas prepared car, albeit driving for a different team, and was considerably faster in his first race of the season.

There were indeed high hopes for Herbst at the start of the race, but he was outshined by his predecessor. He is on a bit of a skid right now with four straight races with finishes of 12th or worse, something Briscoe didn’t do last season. Herbst only has three finishes inside the top 10 in 2021 and is 14th in the overall driver’s standings. Herbst and the Stewart-Haas team need to turn their season around rapidly.

Briscoe is pretty much in SHR equipment in a car fielded by McLeod. https://t.co/dEyosG2Bew

This was ugly and costly. Ryan Sieg elected to pit during the lap 144 caution for debris, but he did not take tires and exited pit road as the leader of the race. Selecting the inside line, he had Harrison Burton and Hemric behind him, with Briscoe and Gibbs to his outside.

In the middle of turns 1 and 2, Sieg lost control of his car, and the rear of his Ford Mustang stepped out. It looked like he would save it in a controlled slide to the left and make the trip to pit road. But when his tires found grip, his front wheels were turned to the right.

The car snapped right towards the outside wall and into oncoming traffic. Berry t-boned the passenger side of Sieg’s car and tossed his car 180 degrees, collecting Brett Moffitt in the process. Moffitt was able to continue, but the crash ended Sieg and Berry’s day. That proved to be a costly and ugly, ‘no tire’ pit call.

Hemric looked to have the car to beat in the first half the Alsco Uniforms 300. He led a race-high of 105 laps. Early in the final stage, his Toyota was a bit off, and Briscoe passed him on lap 115. Four laps later, Jeb Burton spun to bring out the caution.

Hemric’s day took a dreadful turn when pit stops ensued. First, he was boxed in his pit box by Chad Finchum, forcing Hemric to reverse before taking off out of his pit. Moments later, he was penalized because his crew did not have control of a tire and impeded the pit stop of Landon Cassill’s crew, sending Hemric to the rear for the restart.

While Hemric would make quick work of the cars in front of him, he would never reenter the top five. His day ended prematurely as he was involved in a crash on the lap 186 restart.

If he hadn’t been penalized for impeding the pit stop of Cassill, Hemric would have restarted around 10th, depending on the outcome of the choose rule. Had this been the case, he may have found his way back into the top five or higher and avoided the wreck. Another fast car for Hemric, but he still hasn’t found a way to reach victory lane.

Brandon Brown has solidified his place in the Xfinity Series as a top-10 contender and a threat to point his way into the playoffs. However, for most of the day at Charlotte, he wasn’t anywhere to be found at the front. He lacked speed in qualifying and started 32nd as a result. Brown found himself inside the top 15 a few times but spent most of his day in the upper-teens on the leaderboard.

Crew chief Doug Randolph decided to save a set of tires earlier in the race, and when Briscoe spun late to bring out the caution with 20 laps to go, Randolph brought Brown down pit road for four fresh Goodyears.

The race restarted on lap 186 with Brown in 19th but immediately leapfrogged cars as a result of the seven-car wreck in turn 1. Valuable laps of potential green-flag racing were lost for Brown as the cleanup took multiple laps to complete. The leaders would have worn their tires more, and Brown would’ve had more laps to use his fresh rubber if the race stayed green.

When the race restarted for the final time, only seven laps remained and Brown restarted 10th, charging only up to fourth before the checkers flew. The misfortunes of others were Brown and his team’s gain, but it was nearly an upset victory in a day that wasn’t that fantastic for Brandonbilt Motorsports by 2021 standards.

Reddick and Briscoe were the only two NASCAR Cup Series regulars in Saturday’s Alsco Uniforms 300. As noted above, Reddick’s fifth-place will prove valuable for Jordan Anderson Racing. Briscoe drove the No. 99 BJ McLeod Motorsports Ford, which was equipment provided by Stewart-Haas Racing, per FOX Sports’ Bob Pockrass. His car was dominant in the middle part of the final stage before swinging to the tight side. He recovered to a sixth-place finish after spinning with 20 laps to go. That is the third-best finish in the history of BJ McLeod Motorsports in the NASCAR Xfinity Series.

“I don’t know. We’ll go to Mid-Ohio and kick their ass.” – AJ Allmendinger

Ty Gibbs is not showing any signs of slowing down in 2021. In the Xfinity Series alone, he has five top fives through six starts. The lone dent in the season comes from an 18th-place finish at Darlington. Don’t forget about the two victories on the Daytona road course and now Charlotte, and let’s not overlook his four wins in ARCA this season (technically, the record book says five, but one race was a combination event). Gibbs will surely be in a Joe Gibbs Racing Toyota full-time in the Xfinity Series in 2022, but who will he take the seat from?

Harrison Burton has been rumored to be a candidate for a second 23XI Racing seat next season. Brandon Jones was linked to a ride with Gaunt Brothers Racing during the offseason, and likely won’t want to spend a seventh full-time season in the Xfinity Series. Hemric will need to find victory and soon – and most likely multiple times to prove he is worthy of staying. Burton, Jones and now Gibbs are all proven winners.

Hemric has had fantastic runs this season and has repeatedly been the fastest JGR car, among the full-time drivers at least. Should Cup rides not pan out for Gibbs’ three Xfinity regulars for the 2022 season, they all better have an impressive 2021 stat sheet to say, ‘I deserve to stay.’ Because not only will Gibbs likely be running full-time in 2022, Camping World Truck Series regular John Hunter Nemechek is proving he quite possibly could be in contention for a JGR Xfinity ride as well.

Mid-Ohio Sports Car Course hosts the next NASCAR Xfinity Series race on Saturday, June 5. It’s the only standalone race for the Xfinity field in 2021.

The 2020 edition at Mid-Ohio was canceled due to the COVID-19 pandemic, but the last two trips to Lexington, Ohio yielded victories for Austin Cindric (2019) and Justin Allgaier (2018).

The green flag on the BL Transport 170 will drop at 1 p.m. ET on FS1 and MRN. After Mid-Ohio, the stops the Xfinity Series will make in June are Texas Motor Speedway (June 12), Nashville Superspeedway (June 19) and Pocono Raceway (June 27).

I wonder if Ryan Sieg was called to the NA$CAR trailer for committing a mortal sin when spinning out. You are told to lock it down and not to correct for fear of turning back up the track in front of traffic. Of which he did. It could of been much worse.