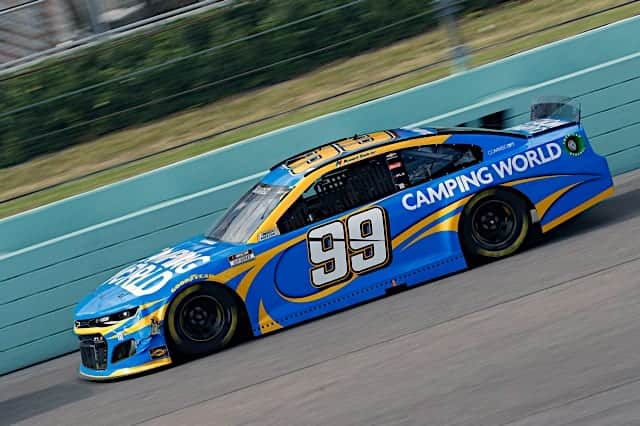 Before we jump into the house and talk about Suarez, I would like to thank all of our veterans and those currently serving in the U.S. military. To the families of those who have sacrificed their lives for our country, we owe a large debt of gratitude to your loved ones and will never forget those who have fought for our freedoms.

For most of Sunday’s (May 30) Coca-Cola 600, it looked as if a new underdog would step up to challenge Trackhouse Racing’s Daniel Suarez for bragging rights among smaller teams. 100 laps in, it looked like a surefire top-10 result for the No. 99 organization was ruined after a tire problem caused an unscheduled green flag stop.

However, Suarez was able to fight back and finish NASCAR’s longest race back on the lead lap. The driver of the No. 99 Camping World Chevrolet persevered, snagging a 15th-place result to keep building momentum for this first-year program that’s continuing to turn heads inside the garage.

After laying down a fast lap in qualifying for the 600, Suarez started the race from the ninth position, raising expectations with part owner Pitbull in attendance.

The first stage went well, the No. 99 clinging stubbornly to a top-10 run when trouble struck. Suarez cut a right front tire with five laps remaining in the stage, forcing him to pit road. The incident left him 29th, one lap down, digging a deep hole for the rest of the night.

The final three stages were a constant battle for Suarez to work his way back up the leaderboard. The team utilized pit strategy, often staying out longer than their rivals in hopes to catch a caution that would give them a lap back. At the end of stage two, they used a wave around for Kurt Busch’s blown engine to try and gain track position.

At the end of this four-hour marathon, Suarez wasn’t able to claw back on the lead lap for long. But one positive of being a lapped car in a race that exhibits long green-flag runs is the fact you can still contend for a solid finish. With how speedy race winner Kyle Larson was, only 14 cars ended on the lead lap, a huge benefit to Suarez as he worked through the pack.

“We were able to get it better there at the end,” Suarez explained. “We just never got the caution that we needed.”

Ultimately, the 29-year-old driver crossed the stripe in 15th for his fifth top-15 result of the season. Suarez now sits 23rd in points, 102 off the playoff cutline and Chris Buescher in 16th.

While plenty of other Cup drivers turned in solid results, it was the NASCAR Xfinity Series that featured a sleeper on Saturday, May 29 in the Alsco 300. For Brandon Brown, it was nearly a massive upset.

Brown started the race in the 32nd position, needing an owner points provisional to make the starting lineup. However,  he quickly worked his way up 11 spots by the lap 22 competition caution. He would gain a few more positions by the end of stage one to finish 18th.

But that’s where Brown stalled out, finishing stage two in the same spot. For a minute, it looked like he’d lose ground in what’s becoming an intriguing playoff battle for the 12th and final spot.

The final stage included a flurry of cautions, allowing Brown’s team to work on his No. 68 Chevrolet during yellows. By Lap 150, Brown had entered the top 10 for the first time in eighth position. However, Brown would fade back outside the top 20 before another yellow with just under 20 laps to go.

That’s when a caution allowed Brown’s crew chief, Doug Randolph, to opt for a gutsy move. He had kept an extra set of tires handy, leaving his driver suffering on older rubber in the hopes that a late yellow could give them an advantage on the field.

It worked, as Brown was a lightning rod on the restart. A multi-car pileup with just a few laps remaining allowed him to keep those fresh tires clean and gain even more spots. Brown then buckled down and went on a furious charge, driving from outside the top 10 into the top five with five laps remaining. Another yellow may have given him a shot to steal the victory, but Brown ultimately settled for an impressive fourth-place result, his second top five of the year. The risk produced a reward as Brown now sits just 17 points out of the 12th and final playoff spot.

“My mindset going into this was control your own destiny,” Brown told reporters after the race. “… A lot of this racing is just circumstantial where you’ve gotta make the best with what’s going on. I’d like to say we would have gotten a top five even if they didn’t wreck over there, but I don’t know. It’s one of those things where you’re grateful for the opportunity, but we know we needed at least one more restart with fresher tires [to advance through the field].”

Erik Jones turned in a solid performance for Richard Petty Motorsports’ No. 43 Sunday. The Byron, Mich. native finished in 16th for the second week in a row, running on the lead lap for much of the night. It’s also his third top-20 showing in the last four races, producing much needed consistency for RPM. Corey LaJoie also turned in a really impressive showing, finishing in the 19th position for Spire Motorsports. It his second straight top-20 result, and to do so in NASCAR’s longest race with few yellows shows the improvement in this team.

In the NASCAR Xfinity Series, Tyler Reddick landed Jordan Anderson a second-straight top-10 finish, this time delivering the team’s first top five (fifth). Jeremy Clements earned his fifth top 10 of the season as he kept a solid grip in the playoff standings, sitting in eighth.

In between, Alex Labbe turned in his second-highest finish of the season with a 14th-place showing. Chad Finchum produced his first top 15 in five starts on the year, helping the No. 13 stay inside the top 40 in owner points. However, Anderson’s team will get the nod there as Josh Berry, who has a winner’s provisional, will run the car in a one-race deal.

The NASCAR Camping World Truck Series also hit Charlotte for NASCAR’s home race. The underdogs were not as competitive in this one, with Austin Wayne Self carrying the torch with a 17th-place finish.

Both the Cup and Xfinity series will take on left and right-handers at two separate venues. The Cup Series heads to Sonoma (June 6) for the first time since 2019 after the pandemic canceled the 2020 event. Road course aces such as Michael McDowell and Suarez should be a factor.

The NASCAR Xfinity Series heads to the Mid-Ohio Sports Course (June 5) where road course ringers will certainly work their way into contention throughout the event.

Meanwhile, the Camping World Truck Series takes the weekend off, returning to action on June 12 at Texas Motor Speedway.

Lots of fight in this team. Never got the lucky dog but Daniel and these guys never gave up and fought hard till the end. Fast car. Great people. P15

After not being in a @XfinityRacing car for over 2 months @ChadFinchum brings it home 15th. Unfortunately @TimmyHillRacer had engine issues and finished 34th. pic.twitter.com/0khfRnMfDO

What, no mention of Darrell Wallace?

I like how you have commented on the men back in 20th place instead of the headlines going only to the top five,Thanks for that