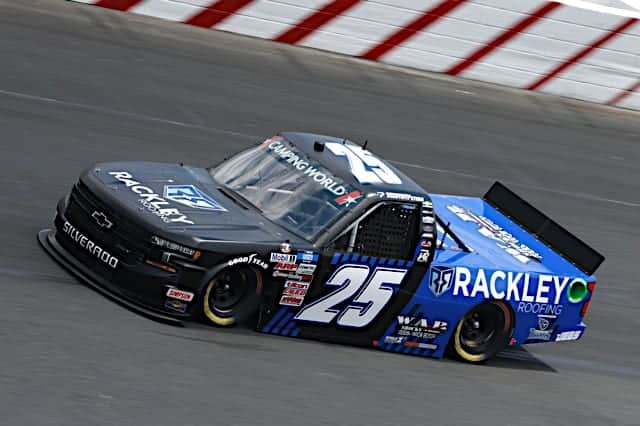 Timothy Peters will no longer drive Rackley WAR’s No. 25 in the NASCAR Camping World Truck Series, the team announced June 1.

Josh Berry will drive the team’s truck at the upcoming races at Texas Motor Speedway, Nashville Superspeedway and Pocono Raceway.

A driver beyond Pocono has not yet been named.

“We appreciate the foundation that Timothy Peters has brought Rackley WAR,” Willie Allen, team co-owner, said in a team statement. “We wish Timothy the best in his future racing endeavors. As a team, we remain focused on the remainder of the season.”

Peters joined the team before the season-opening race at Daytona International Speedway this year for its first foray into the Truck Series. Through 10 races, he had a best finish of 16th at Las Vegas Motor Speedway and two top 20s.

In the series’ most recent race at Charlotte Motor Speedway, Peters finished 38th with steering issues, retiring after 13 laps. The truck had also been damaged in a practice crash earlier in the week.

2021 had been planned as Peters’ return to a full Truck schedule after last running full time in 2016 for Red Horse Racing.

Berry has one Truck start this year, coming at Atlanta Motor Speedway while filling in for Kris Wright in Young’s Motorsports’ No. 02. He finished 22nd.

Cause try trucks suck no one will run good