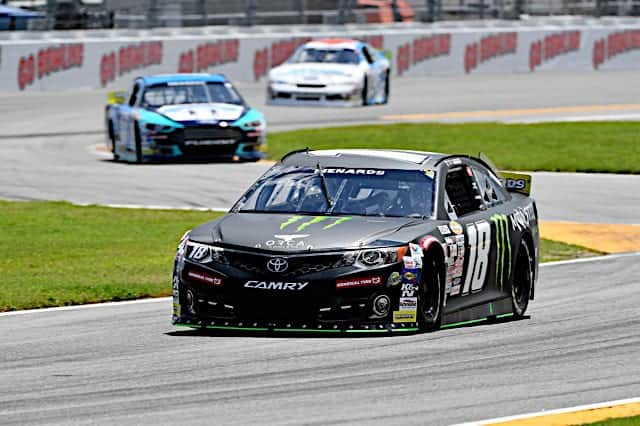 For only the second time in ARCA Menards Series history, drivers will compete at Mid-Ohio Sports Car Course on Friday (June 4). The 2.258-mile road course in Lexington, Ohio, last hosted the series on July 25, 1965, with Jack Bowsher scoring the victory. This time, 16 drivers will race for 42 laps for victory in the Dawn 150.

Ty Gibbs has won a total of eight times this year. He has won four main ARCA races, including the last three, in addition to the ARCA Menards Series West season opener at Phoenix Raceway and the most recent ARCA Menards Series East race at Dover International Speedway.

Gibbs’ prowess extends beyond ARCA though. He won his NASCAR Xfinity Series debut at the Daytona International Speedway road course as well as last weekend’s race at Charlotte Motor Speedway.

Who can stop Gibbs’ winning ways?

Although Gibbs has won every ARCA race since May 1, Corey Heim leads the point standings, 10 ahead of Gibbs. However, Friday’s race marks Heim’s first road course start. While he finished second at Charlotte, he will again need a fast No. 20 Venturini Motorsports Toyota to challenge Gibbs for the victory.

Venturini Motorsports will also field Drew Dollar in the No. 15 Toyota and Xfinity Series driver Brandon Jones in the No. 25 Toyota. Dollar finished on the lead lap in 12th place at the Daytona road course race last year.

As for Jones, a five-time ARCA winner, Mid-Ohio is his first ARCA start since 2018 at Michigan International Speedway. He will use the Dawn 150 to further prepare for the Xfinity Series race at the same track the following day. In five Xfinity Series starts at Mid-Ohio, Jones has one top 10, a 10th-place finish in the series’ most recent race there.

Austin Hill will make his fourth career ARCA start, driving the No. 1 Hattori Racing Enterprises Toyota. The NASCAR Camping World Truck Series regular has two top fives and four top 10s in his five Truck Series road course starts, so he should be a contender in this race.

No off week here!

“I did a test with Mark Rette [team co-owner] a few months ago,” Wright told Frontstretch. “It was just supposed to be a test and then he asked me to do Mid-Ohio. I said, ‘Sure, that’d be perfect cause I run Xfinity right afterward.’”

Wright will compete in the Xfinity Series race at Mid-Ohio the next day driving the No. 26 Sam Hunt Racing Toyota.

Wright told Frontstretch in addition to his ARCA race at Mid-Ohio, he will also drive for Rette Jones Racing at Pocono Raceway and Watkins Glen International.

“Gibbs is going to be hard to beat,” Wright said about his goal for the Dawn 150. “He and Hill will be quick. Top three, top two – if we could win, that would be great. Definitely finishing in the top five.”

Wright said he has run at Mid-Ohio quite a bit in various forms of racing.

“Mid-Ohio is really technical with not many passing opportunities,” Wright said. “If you screw up one corner, then you screw up the next three to four (turns). It will be interesting to see how it goes because the ARCA kids try to force passes. It’ll be fun to see who goes for what pass and see if I can capitalize on them trying to make a pass in the wrong corner.”

“It’s just more seat time,” Wright said about running double-duty. “The setups between ARCA and Xfinity are relatively similar so whatever I wanted in my ARCA car I can relay to my crew chief for the Xfinity race. We can make a change so I should have a similar car for the Xfinity race.”

While Heim and Gibbs rank first and second, respectively, in the point standings, Thad Moffitt has five straight top 10s en route to sitting third in the points.

Super pumped about the way this one turned out! Excited to have @dirteeze_us on board for @officialmidohio this Friday! Time to make some lefts and rights ?? pic.twitter.com/RuRd4RKaDI

“I don’t really have any experience on road courses other than Daytona last year, so I’m looking forward to gaining experience in that aspect of racing this weekend,” Moffitt said in a team release. “Mid-Ohio is a completely new track for me, … but we’ve had a lot of speed lately in our No. 46 Ford Fusion and we are hoping that carries over into this race.”