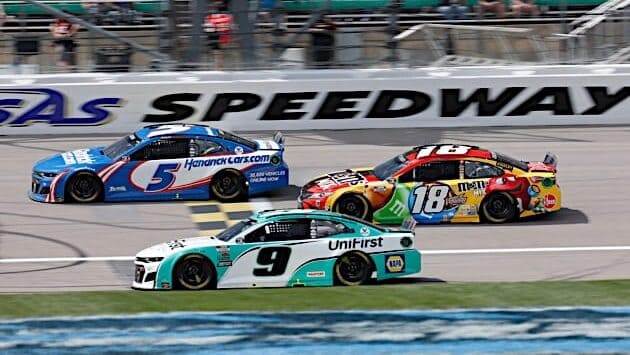 With Kyle Larson‘s dominant performance in Sunday’s (May 30) Coca-Cola 600, Hendrick Motorsports eclipsed the 269-win record established by Petty Enterprises from 1949-1999.

Both teams were the dominant forces of their respective eras, with HMS experiencing a bit of a resurgence as the team that all others have to beat each week in 2021.

Two different teams, different cars, and different eras. Both home to seven-time champions, Hendrick has eight Daytona 500 wins to Petty Enterprises’ nine-win mark. That said, which team might be considered the top team in NASCAR history? This week, Luken Glover and Vito Pugliese offer their perspectives on these two teams which defined their decades in the sport.

Passing of the Torch

Petty Enterprises certainly makes a strong argument for being the greatest team of all-time. Their most successful driver is perhaps the greatest driver of all-time in Richard Petty. That said, it is also really difficult to compare two different eras. Like we see with Lebron James vs. Michael Jordan or Jimmie Johnson vs. Petty, their respective time frames reflect two radically diverse periods in the sport. However, the accomplishments of Hendrick Motorsports are absolutely too significant to ignore. The scary thing for many teams is that they may just be getting started once again with their driver lineup.

If it is plausible to compare two of the greatest empires in the sport, HMS has a couple of advantages. For starters, let’s examine the competition they faced from a mechanical perspective.

Drivers who contributed to Petty Enterprises’ win list include Lee Petty, Richard Petty, Marvin Panch, Buddy Baker, Pete Hamilton and Jim Paschal. These are truly some of the greatest gems that graced the tracks across the circuit. However, a lot of these wins came during times where mechanical failures were a threat every lap, eliminating many cars early. There were only a handful of drivers in the field who could win based on speed. When you get into the 1990s, Petty Enterprises recorded three wins.

Jeff Gordon single-handedly exceeded that mark in his third season of 1995. Granted, Petty Enterprises had taken a big drop-off in the post-Richard era, but it also marked the passing of the torch and transition from the golden age to the true modern era of motorsports.

Secondly, Petty Enterprises’ last win came in 1999 with the late John Andretti. After that, the team went winless through its last season in 2008. HMS has only had one winless season since their establishment in 1984. Additionally, HMS has won with 20 different drivers. Petty Enterprises won with 11. Petty Enterprises won 10 titles between the father-son duo of Lee and Richard. At HMS, they have produced 13 championships among four drivers.

One sharp contrast between the two eras is how many different possible winners there were. In the peak days of Petty Enterprises, you saw a single-digit amount of winners. In the 21st century, Hendrick Motorsports has had to face anywhere from 12 to 17 winners per year. The competition level has risen to where winning back-to-back races is quite an accomplishment.

We also have to look at the brand that HMS has established. They brought iconic sponsors such as DuPont, Lowe’s, Kellogg’s, and many more to the sport. Gordon took the merchandise world by storm with the “Rainbow Warrior” era and then smoothly transferred it to the iconic flame scheme, and established the stylized No. 24 as equally recognizable as the 43. Additionally, HMS brought on fan favorites such as Dale Earnhardt Jr. and Chase Elliott, which further revolutionized the marketing economy of NASCAR.

And who can forget the team’s records? Gordon earned the most wins in modern era with 13 in 1998. Johnson became the only driver to win five straight titles from 2006-2010. And just to flex a little more muscle, HMS recorded its first 1-2-3-4 finish in organization history a couple of weeks ago at Dover International Speedway. Needless to say, this team is not new to making history.

A certain component is the continued success of HMS. There are no signs of slowing down, especially with numerous road-course races where guys like Elliott and Kyle Larson have thrived in 2021. All four of its drivers have the makings to win a championship in the next couple of seasons, further convincing the NASCAR world that this is the most dangerous Hendrick lineup we have seen in a while. So much history, tradition and trail-blazing lies within Petty Enterprises, and they deserve to be in the conversation as much as HMS.

But with a young lineup and lot of success within the organization, it’s safe to say that Rick Hendrick has his fold at the top of the line to extend their record-breaking performance. -Luken Glover

Level up with Level Cross

While Hendrick Motorsports may have broken Petty Enterprises record of 269 wins last weekend, that doesn’t necessarily make HMS the greatest team in history. First off, this is a record that was established over a 50-year period between 1949 and 1999. As one of the foundational teams that helped form the bedrock to build a sport upon and around, Petty Enterprises is far more than a collection of throwback STP schemes and Charlie One Horse cowboy hats.

The Petty Enterprises legacy did not start with Richard, but rather his father Lee Petty. The first repeat champion in the sport, Petty also won the first Daytona 500. The family-run operation came of age in the mid-1960s, as Richard, brother Maurice and cousin Dale Inman established their Hemi Plymouths as the dominant force in the premier racing series in North America. This during an era where they were pitted against established factory Ford teams of the Wood Brothers and Holman-Moody. Petty Enterprises was setting records while Richard Petty was the face of a regional sport that was gaining national prominence and unmatched corporate interest.

Petty’s rise to fame following his 27-win/10 in a row/championship-winning 1967 season was not unlike Jeff Gordon becoming a household name in the late 1990s. Petty Enterprises was such a force that when Chrysler told them they would not be campaigning a Dodge Charger Daytona for the 1969 season but rather the brick-like Plymouth Roadrunner, they literally drove over to Ford Motor Company and had a deal later that day. In return, Plymouth built over 2,500 copies of a specific car to not only campaign – but expressly to get Richard Petty back in the fold – for public consumption.

I know they made some Jeff Gordon edition Monte Carlos in the early 2000s … but that is a weak comparison.

As Petty was cementing his legacy, other drivers were also able to benefit during this era. Pete Hamilton won the 1970 Daytona 500 in a second Petty Enterprises Superbird and Buddy Baker won races in a Dodge – while Petty was still in Plymouths. From 1970 to 1980, Petty Enterprises won 33.2% of the races run, including five Daytona 500s and five championships. Consider who these wins took place against as well – five of the top eight all-time wins leaders, and Hall of Famers – yes – but absolute legends in the sport’s history: David Pearson. Bobby Allison. Darrell Waltrip. Cale Yarborough. Dale Earnhardt. To say nothing of competing against pioneers like Junior Johnson, Curtis Turner, Joe Weatherly and Fireball Roberts.

During the 1980s and 1990s, performance waned. A family operation that had strained a bit and fell behind the curve, they also were part of a corporate pecking order within General Motors, where the Pontiac version of the car ran was not on par with its Chevrolet counterpart (Rusty Wallace’s 1993 season notwithstanding), and the lion’s share of the factory support was going to operations like Junior Johnson, Hendrick Motorsports and Richard Childress Racing.

That Petty Enterprises was able to hammer out that many wins across three different eras in the history of NASCAR is in itself remarkable. While Hendrick Motorsports has been and presumably always will be a Chevrolet operation, look at the brands that Petty Enterprises was able to win with: Oldsmobile, Plymouth, Dodge, Chevrolet, Buick and Pontiac.

This isn’t to be dismissive of anything that Hendrick Motorsports has done, or continues to do. Their performance and stature in the sport is undeniable, and they’re going to eclipse the 300-win mark before William Byron is 30. Just looking back at who Lee, Richard, Maurice and Dale Inman were battling against all the way into into the Modern Era of NASCAR. They set the bar with which super teams like Hendrick Motorsports aspire to. – Vito Pugliese

Hendrick is the best team in nascar history.

Petty is the best driver in nascar history.

HMS has brought the level of cheating to an art form. It’s no coincidence that his greatest success came with Ray Evernham and Chad Knaus and now Knasty Knaus is running all 4 teams. Plus we all know the Fat Felon’s penchant for bribery.

Four exactly equal cars at Dover swept the top four. At Charlotte, CK slipped a bit, with one dominant car, 2 slightly slower and one a distant 5th. At least when JGR was dominating, the team drivers hated each other enough to make the races interesting.

Two important items not mentioned: it took HMS 1,500 more races to do it and Petty Enterprises won with street cars made into race cars, most of HMS wins came in custom made race cars. In addition Petty did not have the benefit of wave around and lucky dogs. We know Jeff Gordon won a race after getting a lucky dog.. The Petty’s did not have the play offs.. Johnson is recognized as a ten race champion. To a lot of fans this places him a notch below RP and Dale Sr. This in no way implies that Jimmie was not a great race car driver.
Debates like this are good for the sport. There are so many variables in auto racing it’s really hard to define the best in any category.

Apples and oranges. Like comparing Johnny Unitas or Bart Starr to Brett Favre or Dan Marino.