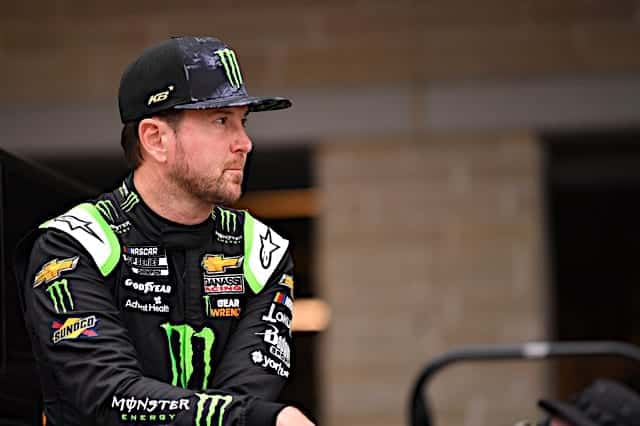 Last weekend, The Athletic reported that 23XI Racing will be expanding in 2022 and that Kurt Busch is believed to be the main candidate for the organization’s second car, with Bubba Wallace staying put in the No. 23 Toyota in the NASCAR Cup Series.

While I trust The Athletic‘s reporting, it should be mentioned that Busch greatly benefits from this news being leaked out. Part of the website’s reporting states that Busch has been offered neither an extension by current team Chip Ganassi Racing nor an offer from another team, as CGR’s exclusive negotiating period with Busch (think restricted free agency) does/did not end until “early June.”

It’s also not uncommon for Busch to sign his contracts relatively late in silly season. It’s not necessarily that Busch is considered a last choice for a team, more that there are negotiations as to both what his contract will be for and/or his sponsor Monster Energy’s level of involvement.  CGR announced its multi-season deal with Busch in November 2019; his first contract with CGR was announced in December 2018.

Going to 23XI at this stage of his career would basically be the beginning of the final chapter of it. Busch has gone from snot-nosed kid to surprise Cup champion to pariah to outlaw to elder statesman in the garage. Ending his career with arguably the most-hyped new team in the sport’s history would not be a bad way to go.

Would that be the right move for 23XI?

Of course, at this point, Busch’s main concern should be winning championships. And it’s really questionable if 23XI is in the position to do that right now.

Wallace has had decent runs this season, but he’s also had a lot of bad luck. Wallace only has six lead-lap finishes this year and has seen race speed amount to nothing. The No. 23 was one of the strongest cars all throughout Speedweeks this year, but an unscheduled pit stop near the end of the race left Wallace 17th at the checkered flag. A spin with no caution in the final stage at Bristol Motor Speedway doomed him to 27th after finishing seventh in the first two stages.

Busch signing with 23XI would be a big boost for the group, however. Busch is a veteran who has been with winning teams, mediocre teams, bottom-feeder teams and teams that are on the rise. He knows what an organization needs to win races and championships, because he’s seen it happen firsthand. There’s a good reason why Chevrolet and NASCAR rely on his input so much when it comes to testing the new car. He would be invaluable as a resource for data and setups.

It would also be a good test for Wallace. I’m not going to take much of what this team does to heart this year, as this is just an establishment year to prepare itself for the new car next year. It’s still questionable, however, if Wallace is going to be a face-of-the-franchise-quality driver. Cup driver, absolutely — he’s proven himself there. But driving for the biggest athlete in the past 30 years and being able to compete for championships is still a very open question.

If Busch comes in and Wallace outperforms him, that would say quite a bit. But if it’s like 2019, where Busch joined CGR to be the teammate to the then-future of the team, Kyle Larson, and ended up outpacing him for the balance of the year, that’s not going to be great as far as Wallace’s future.

What about CGR in all of this?

Losing a driver like Busch in what is probably the twilight of his career is not a great sign for CGR.

The team has struggled with inconsistency really ever since Chip Ganassi bought it. A championship-contending season is often followed by years of mediocrity. After Sterling Marlin finished third in points in 2001 and then almost won a championship before being injured in 2002, a CGR driver did not finish in the top 10 in points until Juan Pablo Montoya’s eighth in 2009. Afterward, CGR wasn’t able to do it again until Larson did so for four straight seasons in 2016-2019, followed by Busch last year.

Ganassi will make very savvy moves at times, such as signing Larson after everybody else passed on the young driver and sliding into Stewart-Haas Racing’s old slot as the No. 1 customer for Hendrick Motorsports engines. But there are some serious concerns, especially considering how much the NASCAR team at CGR lags results-wise compared to the IndyCar team.

This story coming out really makes me wonder if Busch thinks he could have a better chance at a championship driving for an upstart organization that has existed for 15 races vs. a team that has absolutely dominated IndyCar the last year-and-a-half. Can you really blame him at this point? CGR is a good team for a driver to smile and wave at in the awards ceremony after finishing 11th in the playoffs. It is not a good team when it comes to reliable, year-to-year championship contention.

See also
Beside the Rising Tide: Something Old, Something New

Does anybody have anything for Hendrick Motorsports this weekend?

Sonoma Raceway is once again on the NASCAR schedule and will be the site of the first Cup race in 15 months in California.

Sonoma is one of the most precise and technical road courses in North America. It’s a track that is very hard to pass at outside of the hairpin near the end of a lap, with just a crazy amount of elevation changes.

With it having been a couple of years and with more power coming out of these engines as a result of switching to the 750-horsepower aero package, it’s going to be very interesting to watch these drivers, and especially these rookies, drive with no track time this weekend before the race itself.

Hendrick is still the odds-on favorite for this weekend. But while Chase Elliott has won race after race on the road courses for Hendrick in the last couple of years, keep an eye on Larson this weekend. He’s better than you think at these road courses and was in line for a win before the race was stopped at Circuit of the Americas a couple of weeks ago.

Let’s hope Kurt doesn’t go to that racist anti American team. That would be an idiotic way to end a good career.

Let’s hope Kurt doesn’t go to that racist anti American team. That would be an idiotic way to end a good career.
This site is a piece of shit

2311 wanting KB makes sense. With other teams looking to jump into cup next season, and Denny’s recent comments, it’s doubtful they would secure a 2nd charter.

KB offers a higher floor than some unproven driver with potential and would be able to safely get the car into every race based on experience alone.

I don’t think KB has another championship in him no matter where he lands. It wouldn’t be a bad move for either 23XI or KB but 23XI would benefit the most.

I agree, not another championship in Kurt. Anybody that believes Michael Jordan is all about winning just needs to check out his NBA team. MJ is about money. I think Kurt joining Hamlin’s team would be good for all concerned.

I think “Get Real’s” comment should be deleted. “Racist anti-American team?” Really. Your comment holds no weight nor merit nor actually makes sense as neither MJ, Hamlin or Wallace are racist nor anti-American. Sounds like you believe Trump’s old Twitter feed more than you do fact. GET REAL.

Kurt to 23XI would be awesome-I’d love to see what car number he’d use. I believe that he still has wins left in him as he still has the same car control as his younger brother.

A classic response from the left. ” I don’t agree with your opinion, therefore it should be censored”….

KB to 23XI would be great for Toyota, JGR, 23XI, Monster, KB, and hopefully Bubba…but leaves a huge hole at CGR who needs a winning capable driver…that becomes the big domino of silly season

Perhaps, but I’m not sure, but “Get Real” may be referring to BW’s issue with the Confederate Flag and also his favor with BLM. BW turned off a lot of fans when he used his NASCAR platform to advance an non-sport agenda.

Kurt got screwed over when he lost his Penske ride because his association with an “evil woman” that was charged with federal crimes.

Get Real thinks anyone who opposes White Privilege and racism against Blacks is un-American. He still believe the Confederacy won the war, not to mention the more recent Big Lie he also believes.

If Kurt Busch is to be a seat filler for a 6th JGR team for a year, I guess that’s OK. But TRD’s real goal must be to provide seats for its young talent in KBM and JGR/NXS, including Ty Gibbs.

Another classic response from the left ” You aren’t allowed to think for yourself and express your opinion, we’ll do it for you. If by chance your opinion sneaks by the censors at the Ministry of Information, we’ll shout you down and label you “racist”. “

Where did I say Get Real should be shut down? A classic right-wing “victim” response. Nobody is stopping you from posting, but I also have the right to call out your lies.

You didn’t, but then, neither did I.

Get Real’s comments should never have been posted. While its ok to disagree with someone’s views that doesn’t make them unamerican nor racist. The fact that this continues in the “fanbase”, doesn’t do the sport any good.

TRD’s goal is to advance the goals of Toyota. They have no need to support or advance an drivers as much as we may think otherwise.
I suspect that Toyota will not be the only manufacturer to try and circumvent the 4 cars per team rule. I doubt that nascar will do anything but turn a blind eye. Having been unable to add more manufacturers this is really the only way t add more competitive cars.

Kurt Busch should stay where he is.

Bubba Wallace disgraced himself when he went along with the hangman’s noose deal. He was grandstanding and exploiting the situation.

Kurt Busch should stay where he is. Bubba Wallace disgraced himself when he grandstanded over the hangman’s noose. He soaked up his two weeks of fame.

The really sad aftermath is that most of NASCAR, including drivers, went into woke virtue-signal mode and played along. I was ashamed.

The really sad thing is that so many NASCAR fans have your attitude, “Racehorse.” That makes me ashamed.

All you opinionated Cockknuckles need to get a life ! The world tends to unfold,as it’s supposed to !