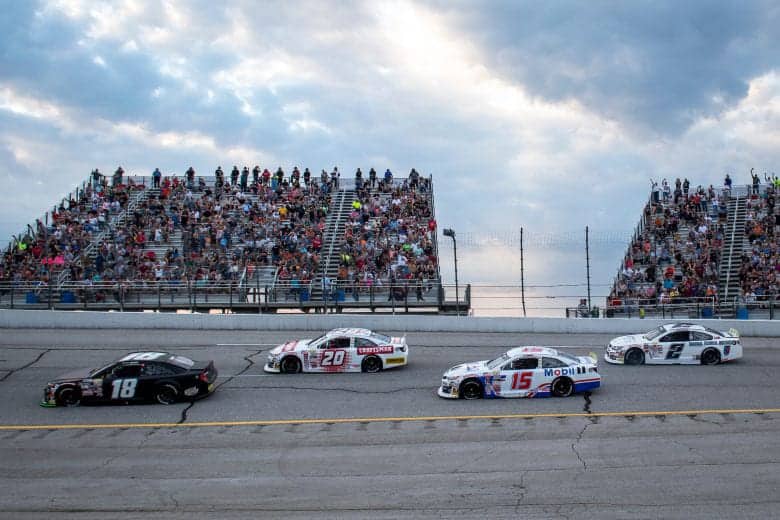 When the ARCA Menards Series drivers receive the green flag for the Dawn 150 at Mid-Ohio Sports Car Course, it will mark a historic accomplishment for the main ARCA series: it will be the 1,500th ARCA race, a series purchased by NASCAR in 2018.

Before ARCA hits the 1,500 race mark, ARCA President Ron Drager spoke to media members via Zoom June 3 to both discuss how the series reached that mark as well as discuss the outlook for ARCA in the future.

Selling ARCA to NASCAR was a much-needed move, Drager said.

“ARCA was a little rowboat in the ocean shaken by big waves, wakes from other boats and when NASCAR purchased ARCA, we got on a bigger boat,” he said. “Last year’s pandemic massively affected our sport. Being a NASCAR property at that time, without their guidance, we never could have our season last year. We would have survived, but it wouldn’t have looked good.”

2020 was the first year ARCA was operated by NASCAR. Some of those changes included adopting a similar points system to NASCAR as well as rebranding the NASCAR K&N Pro Series East and West as the ARCA Menards Series East and West. What ultimately has changed as far as the day-to-day operations of ARCA is the “corporate services … finance, HR and other business-centric activities take place in Daytona.”

Regarding the ARCA operations of the on-track product, that control has remained at the ARCA offices in Temperance, Mich. In fact, “as the East and West series became part of the ARCA platform, we were encouraged to employ those practices in those series,” Drager said.

“The ARCA series is a career destination for professional racers and a developmental series for those who aspire to race at higher levels,” he said. “For the folks like Frank Kimmel, the Venturini family and Andy Hillenburg, they’re happy to carve out a living racing here. Not everyone passes through but we are best known for that development aspect.”

If ARCA is a mixture of veteran drivers, grassroots teams and young drivers developing their way up the racing hierarchy, what is ARCA’s role as a NASCAR-owned series?

“Our role is to be a friendly platform for grassroots racers to transition into a series where you can race at Daytona International Speedway,” Drager said.

Some of those current drivers include Toni Breidinger, who is competing with Young’s Motorsports after being the winningest woman in USAC history, and Andy Jankowiak, who transitioned from the NASCAR Whelen Modified Tour to running some ARCA races after purchasing equipment from longtime ARCA owner Ken Schrader.

A multitude of drivers have used ARCA as a stepping stone into the national NASCAR series. Nevertheless, Drager openly wants more grassroots racers to compete in ARCA.

See also
What Success Do ARCA Champions Find in NASCAR?

“We’ve been working strategically with NASCAR to make our rules package where you can acquire reasonably economically equipment and make the entry point,” he said. “We might want to change the business model from [David Gilliland Racing, Venturini, Joe Gibbs Racing], where they offer a seat for a race or the full season for a price to owning your own equipment and racecar and go race it. The engine, the flange-fit body and now the chassis are things people can invest in. This is the way most grassroots racers have done business. They own their own stuff and they race it. This is what we’d like to try to accomplish.”

“We did that because we were concerned about the car count and we want to keep that series healthy,” Drager said. “We want to preserve the tremendous history of both those series.”

It’s a practice Drager expects to employ in the future with the East and West series, especially the East.

“We need more crossover,” he said. “We got to convince people to do that. Instead of eight-to-10 races in the East and 20 for the main series, we’re building a schedule for team owners to run five standalone East races plus some combination races. There’s a lot of opportunities to race depending on budget.”

Although ARCA wants more crossover, its schedule this weekend makes crossover between the main and West series impossible. On June 4, the main series will race at Mid-Ohio. The following day, West will race at Sonoma Raceway in Sonoma, Calif. 18 drivers are entered for the Mid-Ohio race whereas 22 drivers will compete at Sonoma. Why not schedule those two races with at least a week’s gap to combine those entries into one 40-car field? Ultimately, it’s to line ARCA up with its series owner, NASCAR.

“We’re there at Sonoma in conjunction with Cup,” Drager said. “We can run independently but we’re stronger when we’re there with a NASCAR national series. Here we are at Mid-Ohio with Xfinity this weekend. Our marketing partners — General Tire and Dawn — at Sonoma and Mid-Ohio wanted a big race in their markets. It factored into that decision.

“Having said that, on a piece of paper, it doesn’t make sense, but I’m proud we’re able to do this and be respectable at both venues. We’d prefer it not to be this way, but it’s the way it works and we accept that.”

24,860 days have passed since the first ARCA race was held at Dayton Speedway on May 13, 1953. As ARCA has aged, Drager is grateful for countless peoples’ support throughout the years.

“There are thousands of racecar drivers, owners, sponsors, hundreds of promoters and so many people who have been supportive of ARCA,” he said. “Crew members who were loyal to the brand and willing to make those sacrifices to get us to the next race, the next season. I’m most proud of all the quality people in our garage.”

I remember the days of 30+ car fields in ARCA. Covid-19 really messed a lot of what wasn’t broken, up.

The fact that NA$CAR is involved creates the feeling of impending disaster for the series. I imagine the brain trust at NA$CAR must have their usual brilliant ideas to improve the series.

“Sixty-eight days have passed since the first ARCA race was held at Dayton Speedway on May 13, 1953.”

How long these days must seem! About a year?

I don’t know why it was written as 68 days, but I corrected the mistake. Thanks for pointing it out.

What is needed is crate motor package that all teams can afford. Watching Gibbs run roughshod over the field wek after week is going to kill the series. Smaller teams can’t build cars for superspeedways and bullring. A level playing field and consistenly enforcing rules are paramount to the success of any series.

You are absolutely right, Michael. I have quit watching the ARCA races due to Ty Gibbs. It’s obvious he is driving a “Cup” car in the ARCA series. He has the best equipment and the people to match.

I have done the same thing when Kyle Busch drives in the Camping World Truck Series. I refuse to watch. And that’s a shame. Because I love NASCAR racing but not when only one person dominates and always wins, unless he slows down enough that his new employee can win.

So, ARCA, wake up and do something about this before it’s too late. I know there’s something funny going in with the Gibbs car. Nobody can be that good every week at every kind of track. Especially not an 18 year old. Something funny.

Until you can actually prove something is awry with the Ty Gibbs/JGR ARCA program, something funny holds no bearing. Respectfully, TRD invests an enormous amount of money into the JGR ARCA program, Ty Gibbs is immensely talented, & JGR obviously invests in the best setup for his cars.

It saddens me you don’t watch the Truck Series when Kyle Busch is entered because there are good battles in the race beyond wherever Busch is running on the track.

The guys on TV always say the drivers welcome Kyle and other Cup drivers in the lower series because they can learn so much from them. How can you learn anything when most of the time the only time you see these guys is when they’re lapping you? In regards to the Gibbs operation, in the Cup series their 4 man teams are constantly going to the rear at the start for various infractions in case you havent noticed. Put Ty in a Venturini car or some other car, and he would do well, but not dominate without the fishy dominance of a Gibbs car.

How do you expect me to prove it? Should I put a spy in the pits around his team? Damn, man, common sense tells you that something funny is going on with the Ty Gibbs car. And that extends over to the Xfinity Series as well. If I were one of his Xfinity teammates, I’d be having a serious talk with Grandpa Joe about this situation. Oh, wait a minute, I know. He is immensely talented. You can deny what must be going on with Gibbs’ ARCA and Xfinity cars but I hear the rumblings from race fans all the time. And that rumble is getting louder and louder. I may not have the college education you have but as I said at the start of this, common sense will get you further in life than education will. So, if you think there is nothing FUNNY going on with the Gibbs cars, then I have some oceanfront property in Las Vegas I want to sell you.

As far as your saying I should watch the Truck races that Kyle Busch is in anyway because there is great racing beyond where Busch is on the track, I would say they show very little of anybody other than Busch. So, no thank you. I’ll pass (no pun intended).

All the engines are either ARCA Ilmor or Roush-Yates. While it’s not an exact crate motor program, it is more cost-effective than allowing teams to build their own engines. As for a level playing field, that will never be the case in any racing series, be it from NASCAR on down all the way to a local short track to open-wheel series, etc. As for consistently enforcing rules, I don’t know what, if anything, specific you’re referring to. If you can please elaborate, I’d be more than happy to both investigate & respond to claims.