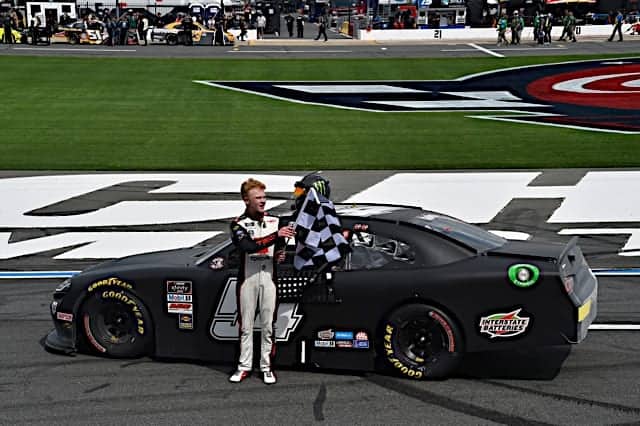 Through 12 races in the NASCAR Xfinity Series this season, eight different drivers have been first across the start/finish line to take the checkered flag.

Of those race winners, however, three won’t be in the running for the series title — Josh Berry, Kyle Busch and Ty Gibbs.

As my high school teachers would tell you, addition and subtraction were not my strong points, but three is nearly half of eight, meaning that of the drivers to win a race in NASCAR’s No. 2 series so far this year, nearly half won’t be factoring into this year’s championship. That brings up a question that teams and NASCAR itself have to grapple with — does winning a title in this series matter?

Part of that has been forced by the nature of NASCAR’s top three series using an Xfinity schedule to ease drivers upward. See Berry. Another is due to a driver being ahead of schedule. Exhibit A here is Gibbs. Just ask Coy Gibbs, vice chairman of Joe Gibbs Racing, about the pressure that can be put on young drivers as they advance. Coy, by the way, is also Ty’s father.

“My approach is you’re going to have to face the pressure sooner or later, so I might as well apply it as hard as I possibly can,” the elder Gibbs said. “Then at 14, 14 1/2, I completely backed off, left him on his own so he could kind of go through it from 14 1/2 on up on his own. I think that’s important, too. I don’t want to sit there and handhold the kid. He doesn’t need it.”

And then there’s the track promoter’s dream that is Busch, who brings in fans and the eyeballs fixated on how drivers like him will capture the winner’s trophy.

The main issue is this: A portion of the race winners may bring excitement to the series, but that overshadows a race for a championship. A season-long points format fits perfectly in the NASCAR Cup Series of today where the same drivers, save for some one-offs for mostly road-course and restrictor-plate races are racing each week.

NASCAR has been bullish on changes as of late. There is no hiding that. Everything is up for grabs from the cars, venues, scheduling and beyond. That should now include hitting the reset button when it comes to how the champion is determined in the Xfinity Series.

If the dynamics of the series are going to continue to be one on which it is almost splintered in half — those racing for points vs. those putting more weight on wins — then the carbon copy of the Cup Series is not viable.

And it’s quite simple to do. Just triple the amount of points awarded for race victories and top-five finishes, and you have a totally different points system to set the Xfinity Series apart from the rest of NASCAR. Do that, and all of a sudden, drivers are forced to make the most of every race that they enter. Days of riding around in the back for a ‘good points day?” That would be over. Plus, if a driver has a bad race or two, incentivizing higher finishes can negate those tough days.

That’s a lot more exciting than “Cup Lite,” that’s for sure.

What to watch this week…

The value of experience – Mid-Ohio Sports Car Course does not have a deep history with the Xfinity Series such as tracks like Darlington Raceway, Martinsville Speedway or Charlotte Motor Speedway. But that does not mean that drivers in this series have not had time to assert themselves. Austin Cindric, Justin Allgaier and AJ Allmendinger have one thing in common — each have won once in the five Xfinity races at Mid-Ohio. It’d be foolish not to pick one of those three to win this weekend.

Brown looks to follow up – It’ll be a story worth watching during the summer, can Brandon Brown and the his team become known as “The Little Team That Could” by making the playoffs? To do so, consistency is key. Brown was fourth last week at Charlotte. That finish came off of a four-race span in which a top 10 was followed by a finish outside the top 20. To make the playoffs, Brown will need a strong diet of top-10 range finishes.

Harrison Burton closing in? – Don’t look now, but Harrison Burton could be closing in on his first win of the year. With last week’s third-place finish at Charlotte, it gave the youngster three top-six finishes in a row. The last time Burton had this kind of streak? The end of last season when he won at Martinsville and Texas followed by a sixth at Phoenix.

Screw the writers opinion racers want the best competition. It’s how you get better