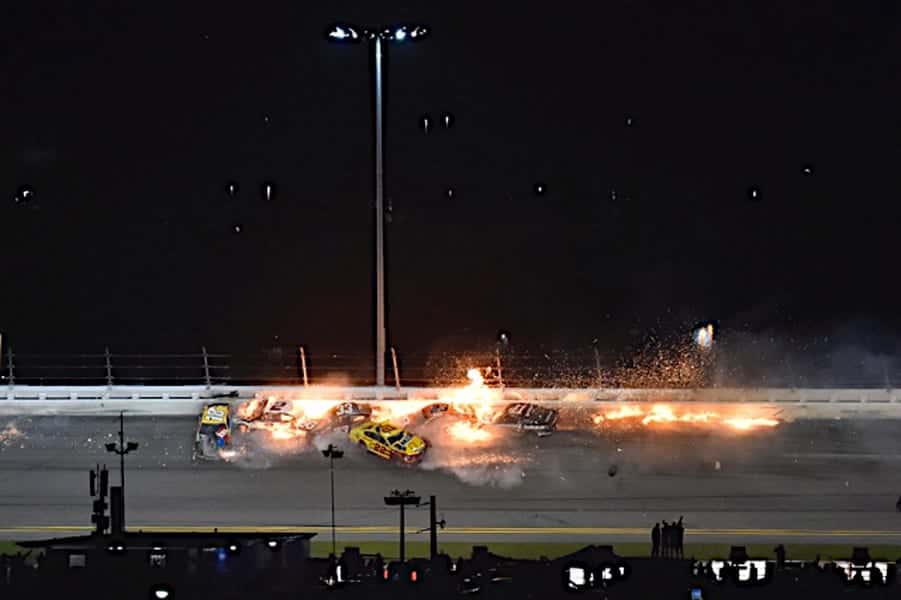 In June of 1895, the world witnessed something unprecedented: the Paris-Bordeaux-Paris race, an event widely considered to be the birth of automobile racing. Both the cars and the sport have come a long way since then, with different competitions and classes around the world all tracing their ancestry to this initial spark.

Now, over the course of 126 years, it’s reasonable that mistakes would be made from time to time as manufacturers and governing bodies explore new technologies and approaches. Today, we take a look at some of the greatest blunders, false-steps and failed investments in the history of the sport. Now, these investment errors may not be on the same scale as Donald Trump sending six major companies into bankruptcy, or Apple firing Steve Jobs in the 1980s, but there are still some commendable faux-pas for us to explore.

Mercedes-Benz CLR was a short lived Le Mans Grand Touring Prototype car built to race in the legendary Le Mans 24-hour endurance race. In this instance, the vehicle in question managed to live up to the word “prototype” due to its experimental aerodynamic profile that had quite unexpected and spectacular consequences. In qualifying rounds of the 1999 race, driver Mark Webber, the Formula 1 legend, lost control when his CLR became airborne due to aerodynamic instability on a high-speed stretch and crashed.

Amazingly, this instability went on to happen two more times, even after emergency modifications to the cars. The final crash saw Peter Dumbreck behind the wheel of the CLR in the main event. He took to the sky, flipping five or six times before landing over 30 meters from the racetrack. Thankfully, all drivers were uninjured. Mercedes-Benz promptly withdrew from the event, letting rivals BMW win the podium the next day.

The Fast Masters racing tournament was one of the more explicitly bizarre concepts ever to see the light of day in the racing world. The deeply unlikely and short-lived series took place on the 5/8-mile oval of Indianapolis Raceway Park with a field of identical $630,000 Jaguar XJ220 supercars. What’s more, to qualify for entry to the series you had to be aged 50 or older.

If that all sounds like a recipe for disaster, you wouldn’t be wrong. While nobody was harmed competing in Fast Masters, the number of crashes involved was frankly impressive, with three cars being destroyed in the very first round of the first race.

The whole series was conceived as a televisual spectacle that was supported and promoted by ESPN. The aerodynamically slick XJ220s were profoundly unsuited to racing in an oval, with very little lateral downforce to prevent them from spinning out and causing pile-ups. The series lasted one season in 1993 before being consigned to the bargain bin of motorsport history.

Formula 1 is famous for being intensely challenging to break into, with the development costs of producing competitive cars each season meaning teams without abundant funds are often left limping near the back of the grid. Among the retinue of poorly-performing teams to try their hand at the top tier of motorsport, one shines above all others. Lola had been developing chassis for F1 teams for many years and had begun to consider the prospect of entering their own cars in the prestigious competition. The plan was to spend two years developing their F1 prototype in order to debut during the 1998 season.

Unfortunately for Lola, they had teamed up with the credit company MasterCard to secure the required investment to develop the team. MasterCard, paying no heed to the realities of developing a world class racing car, pushed Lola to debut in the 1997 championship, a full year before they were deemed ready to do so. The new V10 engine they were developing for the T97/30 car wasn’t finished, so they had to install a much less powerful Ford V8 in order to get the vehicle running.

As if the engine wasn’t enough of an issue, the T97/30 had yet to undergo aerodynamics  testing. The combination of these two factors led to drivers Ricardo Rosset and Vincenzo Sospiri failing to qualify for the Melbourne Grand Prix with a pace some 13 seconds behind the pole position. MasterCard Lola subsequently withdrew from the competition, and the team never got to compete in a single race.

I quit reading after the cheap shot at Trump. GFYS.

A Different Steve
Reply to  Mike

I agree. Hide the identity of the author(s) and allow cheap shots at people you don’t like in the first paragraph. Pretty weak journalism (if that’s what you want to call this piece) in my opinion. Do better Frontstretch.

What does “ This article is posted in collaboration with an outside sponsorship client” exactly mean? I can see from the disclaimer that the “ The opinions and information contained within do not necessarily represent Frontstretch and its staff.” but what exactly is the function of these articles then? Some sort of paid content? Who exactly is the outside sponsorship that put this article together?

I’m a fan of racing and it does provide a break from what’s happening in the rest of the world so could we please keep the articles politics-free? I know that politics wasn’t the thrust of the article but it does seem like poor writing to add in a one line reference as it achieved most likely what the writer wouldn’t want which is that people keyed in on that line out of the entire article. All it does is to move readers away from the point of the article. While I may not have been a fan of the guy mentioned, I am just one guy with an opinion and seeing we all have them we really don’t need to have it affect our mutually love of stock car racing.

For the record though, the section on the Fast Masters series was interesting and well worth watching the link for the race. Not sure why, if they were running Jaguar XJ220’s they put them on a 5/8 track instead of a road course which they were best suited to. Hence, throughout the series all 12 XJ220s end up wrecked at one time or another. On the plus side you get to see Dick Trickle driving a Jaguar.