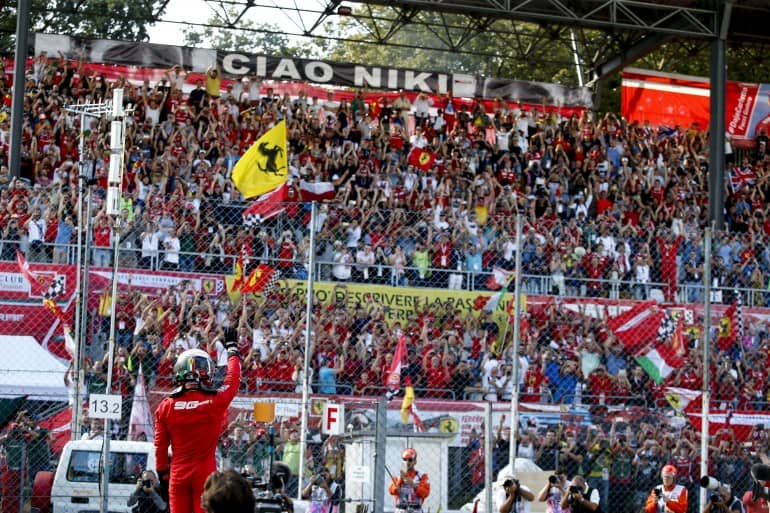 After the heartbreak of the May 23 Monaco Grand Prix, Charles Leclerc has redeemed himself in Azerbaijan. The Ferrari driver had been on pole for the 2021 edition of Monaco but battered the barriers at the end of qualifying, sustaining damage that prevented him from starting. Leclerc had no such problems this time out around the streets of Baku, securing first place on the grid for tomorrow’s Azerbaijan Grand Prix.

Leclerc’s pole position time was set on his initial attempt in Q3, with a lap time of 1:41.218 thanks to catching a tow from Lewis Hamilton in the final sector. Although his time likley could have been surpassed as Q3 finished, every driver missed out on their final runs as both Yuki Tsunoda and Carlos Sainz crashed in the final seconds of the session. Entering turn 3, Tsunoda locked up the brakes on his Alpha Tauri, sending him straight into the wall on the exit of the turn. Sainz, meanwhile, seemed to be caught out by Tsunoda’s incident, locking up in his Ferrari and spinning down the escape road, smashing his front wing into the barriers.

The two crashes solidified the positions that had been set by the first runs in Q3. Behind Leclerc by two-tenths of a second was the Mercedes of Hamilton, aided on his flying lap by the tow given by teammate Valtteri Bottas. Max Verstappen will start third in the Red Bull after looking like a favorite for pole all weekend and was clearly disappointed when he emerged from the car, employing some mild profanities in his post-qualifying interview to make his frustration known.

Pierre Gasly put in a phenomenal lap to go fourth fastest with a 1:41.565, pulled down the main straight by the tow from his Alpha Tauri teammate Tsunoda earlier in Q3. Gasly starts ahead of the Ferrari of Sainz, who was a couple of tenths up on the McLaren of Lando Norris. Norris ended qualifying under investigation for a red flag infringement in Q1 and could face a three or five-place grid penalty for Sunday (June 6).

Editor’s note: After the investigation, Norris received a three-place grid drop and three penalty points for not following the red flag procedure; he will now start ninth.

Sergio Perez, who had looked rapid in his Red Bull through the weekend, will be dismayed with sixth on the grid, in front of Tsunoda, who made it into Q3 for the first time. Alpine driver Fernando Alonso also had his first Q3 appearance of the year and will start in eighth. Bottas’ difficult 2021 continues; after giving Hamilton the tow on the initial runs, Bottas sought to pick up some aerodynamic help from other drivers for his final lap but never got the chance and will start in 10th.

Q2 also ended early when Daniel Ricciardo locked up the front left tire on his McLaren and plowed into the barriers on the outside of turn 3. Ricciardo had been in 13th and was pushing to reach Q3, with his mistake preventing four other drivers from improving in their final flying laps.

Aston Martin’s Sebastian Vettel, who reached Q3 in Monaco, had been pushed into the elimination zone by Tsunoda earlier in the session and ended up just 0.029 of a second behind Alonso when Ricciardo crashed. Behind him came Esteban Ocon for Alpine, who had kissed the walls during a massive moment of oversteer earlier in Q2 and will start in 12th. Ricciardo will line up 13th, ahead of Kimi Raikkonen’s Alfa Romeo and the Williams of George Russell, who continued his streak of out-qualifying his teammates.

Early on in Q1, Aston Martin’s Lance Stroll locked up his front right tire coming into the sharp turn 15 and clipped the wall, shattering his suspension, ending his qualifying session and bringing out the red flag. Not long after the action got back underway, Antonio Giovinazzi, driving for Alfa Romeo, carried too much speed coming into turn 15 and clobbered that same wall, producing yet another red flag.

George Russell benefited from the time stoppages, which allowed his Williams mechanics to finish replacing his power unit. In the final moments of Q1, Russell put in a strong lap to go 13th, pushing teammate Nicholas Latifi into 16th and out of Q1. Behind Latifi were the Haas drivers of Mick Schumacher and Nikita Mazepin, who will start ahead of Giovinazzi and Stroll in tomorrow’s race.

In other news this week, the 2021 Formula 1 schedule was rejiggered yet again. Three weeks after the Turkish Grand Prix (itself a replacement for the Canadian GP) was dropped due to COVID-19 travel restrictions, F1 announced the cancellation of the Singapore Grand Prix for the second year in a row.

When the Marina Bay Street Circuit joined the calendar back in 2008, it became F1’s first night race, providing stunning TV shots as the cars zipped around illuminated streets, surrounded by the twinkling lights of Singapore’s skyline and the neon glow of the Singapore Flyer ferris wheel. Along with spectacular views, the track is fairly wide for a street circuit, allowing for multiple overtaking opportunities. However, the extreme heat and ever-present barriers mean it’s still a challenge.

The 2021 Singapore GP was originally planned for the weekend of October 1, but safety and logistic concerns mean fans will have to wait until 2022 (fingers crossed) for this dazzling track to make a return.

A replacement has yet to be named, but several options are rumored. The Chinese Grand Prix, which was postponed from its original date in April, could return and is logistically sound since the following race will be in Japan. The Shanghai International Circuit also tends to yield exciting races, such as Daniel Ricciardo’s charge to victory in 2018.

Another alternative could be the Turkish Grand Prix, as an October date could allow enough time for the current travel restrictions to be lifted. As Slipstream Saturday covered three weeks ago, the Istanbul Park Circuit is a thrilling, undulating track that lets drivers take multiple different lines through many of its corners.

The last possibility is a second race in the United States. However, Roger Penske has reportedly already taken Indianapolis Motor Speedway off the table, so two grands prix at the Circuit of the Americas would likely occur. There is already a free weekend between the race in Japan and the United States Grand Prix where a second U.S. race, perhaps called the Texas Grand Prix, could happen. Don’t discount the possibility; the track is well-liked by fans and drivers alike.