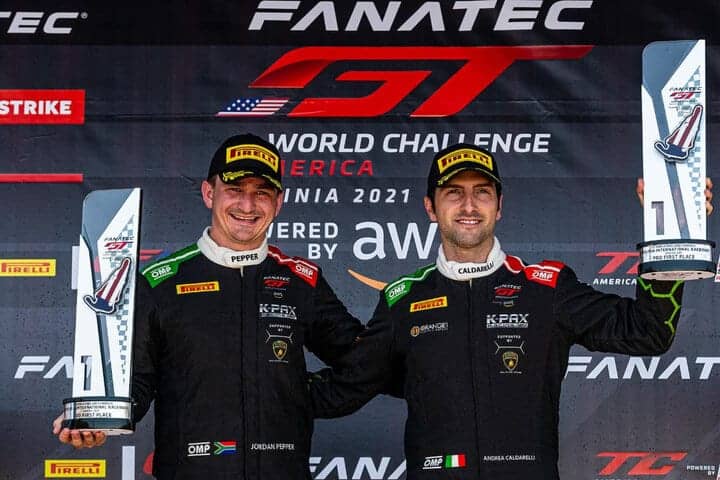 K-PAX Racing’s Andrea Caldarelli and Jordan Pepper led all but five laps to win the first race of the weekend at VIRginia International Raceway Saturday (June 5).  It is their fourth win of the Fanatec GT World Challenge America Powered by AWS season in five races.

“We knew we’d struggle a little bit in the beginning, but the car was really good,” Caldarelli said after the race.  “I just tried to save some tires and juice for the end of the stint.”

Effectively, this was a two-car race between K-PAX Racing’s No. 3 Lamborghini and HTP Winward Motorsport’s No. 33 Mercedes.  Caldarelli opened up a small lead over Russell Ward and settled in for a strong run.  Meanwhile, teammate Corey Lewis ran into serious mechanical problems that ended their race in the opening laps.

There was some trouble on this day, though.  Michael Di Meo, making his series debut for Compass Racing in their Acura, spun and hit the tire barrier in the Oak Tree turn on lap 10.  The NSX did lose a mirror, a wing endplate and some bodywork, but Di Meo was able to drive the No. 77 Acura back to the pits.  Di Meo and teammate Matt McMurry would eventually finish three laps down in 12th.

The race’s sole safety car period came out 35 minutes into the race after Jeff Burton‘s Lamborghini Huracan caught fire as a result of a fuel leak.  Burton pulled off to bring out the yellow.  This happened right before the pit window was going to open, resulting in a complete reset.

The race was ultimately decided in the pit window.  Caldarelli pitted at the beginning of the pit window and got a decent stop from the K-PAX team.  Ward stopped a lap later and the Winward team put together an excellent stop.  However, a tire got loose.  An SRO America series photographer actually knocked the wheel down to keep it from crossing the pit lane.

Naturally, SRO America has rules against loose wheels in the pit lane.  While Mikael Grenier was able to get out of the pits with a small lead over Pepper, series officials assessed a drive-through penalty to Grenier for the violation.  Pepper took the overall lead when Grenier stopped to serve the penalty.

Turner Motorsport’s Robby Foley moved up to second overall when the penalty was served, just a couple of seconds behind Pepper.  However, as the race continued on, Pepper slowly but surely drove away from the field to take the win.

“To be fair, we tried to undercut the others a bit and my out-lap wasn’t great, and we got jumped [by Grenier],” Pepper said.  “But luckily, they got a pit-stop penalty, so we got the spot back.  “It was really tough in this heat because the cars become incredibly hard to drive.  It was just about being consistent to the end and bringing it home.”

Caldarelli and Pepper’s margin of victory was 6.609 seconds over Foley and Michael Dinan.  Grenier and Ward ended up third in class, 20 seconds behind.

In the Pro-Am class, Wright Motorsports’ Fred Poordad started from the pole in his Porsche and pulled away from the pack pretty quickly.  Inception Racing’s Brendan Iribe gave chase in his McLaren.  Much like in the Pro class, the safety car for Burton’s fire really closed things up for the pit stops.

Unlike the Pro class, it was not a series of penalties that decided things.  Instead, it was a series of bad stops.  Poordad pitted from the lead (fourth overall) to hand over to Jan Heylen, but had big problems on the stop.  The minimum pit road time was 70-71 seconds.  Wright Motorsports’ pit road time was 91 seconds.  That’s not going to work.  DXDT Racing’s No. 04 had a 85-second stop for George Kurtz and Colin Braun.  TR3 Racing had wheel gun issues on their stop, while Inception Racing had a catastrophe that dropped them from second in the Pro-Am class to nearly a complete lap down.

DXDT Racing’s No. 19 Mercedes started by Erin Vogel had an excellent 71-second stop to swap over to Michael Cooper and put four tires on.  That gave Cooper the Pro-Am lead by nearly 10 seconds over Racers Edge Motorsports’ Jacob Abel.

Cooper eventually stretched his advantage up to 15 seconds before backing off just a little.  It was still more than enough to give DXDT Racing the Pro-Am victory.  For Vogel, this is her first career victory in Fanatec GT World Challenge America Powered by AWS competition.

Cooper and Vogel ultimately finished third overall, 7.478 seconds ahead of Heylen and Poordad.  Braun and Kurtz recovered from a late spin to finish third, then Zelus Motorsports’ Jason Harward and Madison Snow.  Ian Lacy Racing’s Frank Gannett and Drew Staveley were fifth in their Aston Martin.  Abel was still running fourth in class on the final lap when he suffered an undisclosed mechanical failure and was forced to pull off-course.